France remains one of the world’s leading study destinations. But growth has slowed in recent years and France is starting to slip down the table of global destinations as other countries have seen their international student populations grow more quickly in recent years.

Building on a stable and substantial enrolment base from African markets, France was for some time the third most-popular study destination in the world, after only the US and UK. However, that position has shifted over the past five years and foreign student numbers in France have now been overtaken by those in China, Australia, Canada, and Germany. The growth booked by these other destinations over the last several years now places France as the seventh-largest host of foreign students, ahead of Japan.

Some of this slowdown might be attributed to the fact that French institutions are already highly internationalised. “The proportion of international students to total students is higher than in US and China, representing between 12% and 13% of whole student population and 42% of doctoral students,” said Professor Patricia Pol of Université Paris-Est in a recent interview for NAFSA’s International Educator magazine.

As the following graphic illustrates, France continues to rely on Africa for the bulk of its international enrolment. Indeed, the share of enrolment accounted for by African markets increased to 42.5% in 2014/15, up from 39.2% in 2010/11. Both the proportion of enrolment – and absolute student numbers – attracted from other major global regions, including Europe, Asia, and Latin America, have remained quite stable over this same period. In other words, most of the overall growth registered for France over the last five years has been driven by Africa.

“A large share of international students who come to France are from countries that are former French colonies – especially countries in Africa,” adds the NAFSA report. “In many such countries, French is widely spoken and their national secondary school systems have been modeling after the French public system, and, more recently, the European design of three cycles (license, master’s, and doctorate), resulting in a seamless transition for such students when they matriculate into French higher education institutions as international students.” 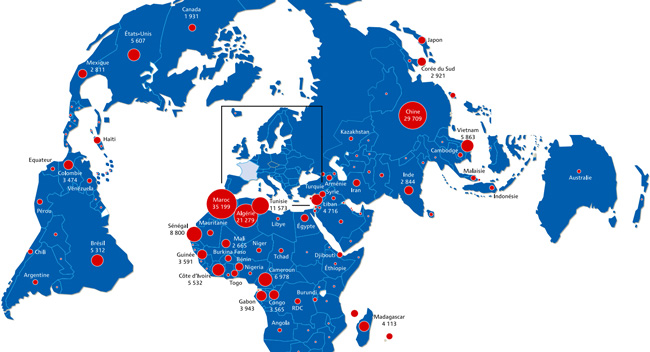 Outside of Africa, China is another standout market. While growth has been modest in terms of Chinese enrolment in France, China alone accounts for about 60% of all Asian enrolment in French institutions. 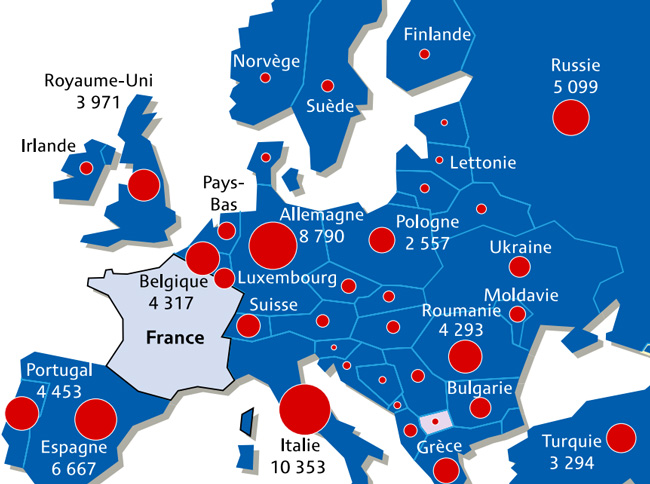 Some observers point out that France’s efforts to diversify and expand its enrolment have been hampered by a relative lack of English capacity in French institutions, particularly given the global demand for English study and the growing English proficiency in many of the world’s leading sending markets.

However, French officials and educators have taken steps to address this in recent years, including the introduction of related legislation in 2013 to formally allow university subjects to be taught in languages other than French. And now, as is the case in many other European markets, the availability of English-taught courses at French universities has expanded in the years since.

The slower enrolment growth of the last four years is at odds with the ambition of the French government to push the country’s foreign student numbers considerably higher over the coming decade. France has a stated goal to build its international student base to 20% of total higher education enrolment by 2025. This works to an enrolment of about 470,000 international students based on current levels.

In view of the already-high proportion of foreign students in French institutions, however, it may be that this vision is also somewhat at odds with the inclinations of French universities and colleges. Professor Pol acknowledged this in her interview with NAFSA, noting that, “There may be a split between French government officials, who desire more international students for economic and global influence reasons, and leaders of French higher education institutions, many of whom feel that the main challenge for their institutions is much more quality of, rather than quantity of, international students and who must deal with the economic and administrative challenges of addressing international student needs.”

The government moved its goal to boost foreign enrolment back to centre stage in October 2015 when French President François Hollande announced a wide-ranging programme of initiatives designed to provide additional supports for both domestic and international students in France.

The National Student Life Plan (Plan National de Vie Étudiante, PNVE) contains a number of important measures for foreign students. The PNVE remains subject to parliamentary approval but the government is already moving to implement at least one of the planned initiatives in the form of a new online hub of information and services for students.

More specifically of interest to international students are a number of measures targeted for implementation over 2016 under the theme of “Improving the right to stay and simplify procedures for foreign students.” These include the following:

These measures are aimed squarely at boosting the appeal of France and French institutions for international students. As the PNVE notes, “The quality of the welcome [to students], notably in terms of administration, the improvement of residence rights, and the simplification of such procedures, are key issues for the attractiveness of French higher education institutions.”

Implementation the PNVE is expected to unfold over 2016, with a number of measures in place for the beginning of the 2016/17 academic year in particular.

This entry was posted in Europe, France, Higher Education, Regions.