In a worrying development for one of international education’s most important emerging markets, Nigerian students studying abroad on scholarships are reporting that they are not receiving the stipends promised them for housing and other living expenses. A number of foreign universities have also indicated their accounts with Nigerian funding agencies are in arrears.

Most recently, the concerns over timing of payments have been borne out for at least some students with an announcement from the Rivers State government that it will no longer be able to fully fund its students abroad.

The Nigerian government derives 70-80% of its revenues from oil, and earlier this month, Nigeria’s top oil official and outgoing OPEC President, Emmanuel Ibe Kachikwu, told CNN that plunging oil prices are causing economies like Nigeria’s to be “shattered,” and called for an emergency meeting of OPEC members. The collapse in world oil prices has seen the Nigerian currency, the naira, fall to record lows against the US dollar this year. Economic growth fell to an estimated 3% in 2015 from 6.3% the year before, and against a four-year average of 5.31% per year between 2011 and 2014. Forecast vary for 2016 with expected growth rates running in the range of 3-4%.

In response, Nigerian President Muhammadu Buhari has introduced austerity measures to the country, in part as a way of delivering on his 2015 campaign promise to weed out corruption and money laundering by the political elite. One of these measures is a policy restricting the use of foreign exchange accounts domiciled in Nigeria.

Both the falling price of oil and more restrictive foreign exchange controls may be contributing to an apparent pattern where expected tuition and living stipends for scholarship students have been substantially delayed. Some students are worried they may have to return to Nigeria as a result.

Even so, the fundamentals of the country’s education market are strong. With a rapidly expanding middle class, total tertiary enrolment projected to double by 2024, and demand for domestic university places far outstripping supply, Nigeria remains a key emerging market.

In 2015, Nigeria’s roughly 130 universities could admit only about 520,000 of the 1,735,720 students who sat for the country’s national entrance exam, the Unified Tertiary Matriculation Examination (UTME). The government has approved licensing for seven new private universities to help with capacity, and promised new universities of science and technology with satellite campuses around the country. But even so study abroad has been an increasingly popular option for Nigerian students in recent years.

Felix Adedayo, managing director of the education agency FAB Educational Consulting, notes Nigeria as one of the world’s leading emerging markets for education, and one where growth has particularly accelerated over the past decade.

An ecosystem of scholarships

The wide field of available overseas scholarships has been an important factor in the increase in Nigerians studying abroad. These include those offered by the federal government, various state governments (including states such as Kano, Rivers, Cross Rivers, Sokoto, Bauchi, Yobe, and Kaduna), and by corporations. 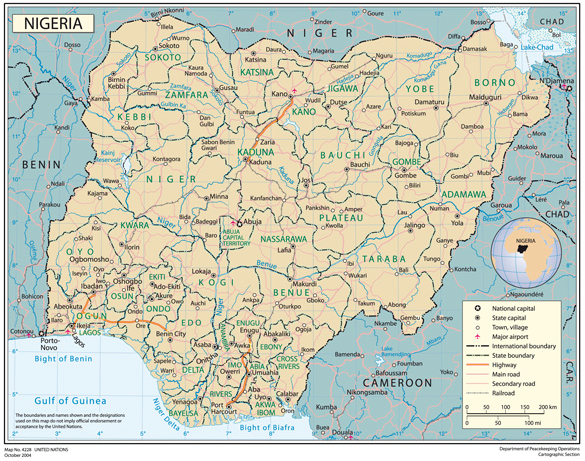 By some estimates, as many as 40% of Nigerian students abroad have some measure of scholarship funding for their studies. All told, Nigeria spends a reported US$8 billion on scholarship programmes, and it prioritises foreign degrees in science, engineering (including aero-space engineering), medicine, environmental management and technology.

The country’s state scholarship programmes can be substantial. For example, Mr Adedayo points out that Yobe State spent USD$3.5 Million on scholarships for 9,000 students over 2014 and 2015, and Kano State has recently sponsored 2,600 students to study abroad.

Mr Adedayo also highlights the following scholarships to illustrate the range of federal, state, and privately funded programmes currently in place, some of which are more weighted to:

As this sampling illustrates, many of the scholarship programmes in Nigeria are directly or indirectly supported by the country’s considerable oil and gas industry, whether in the form of funding from oil and gas companies, from oil-rich states, or from the federal government itself.

In fact, it is this financial underpinning of Nigeria’s extensive scholarship systems that has now placed the stability of the scholarship funding itself into question.

Reports of delayed tuition and stipend payments for scholarship students began to accumulate over the last half of 2015. In November 2015, the Canadian national broadcaster CBC News reported that:

“Across Canada, 246 Nigerian students in 14 universities were promised their tuition and living expenses would be covered [by RSSDA, an organisation owned and funded by Rivers State in Nigeria] during their four-year degree programme. However, they haven’t received their living allowance for the past 11 months and their tuition is millions of dollars in arrears.”

The acting executive director of the RSSDA at the time, Godwin Poi, agreed to speak with the CBC on the matter, and admitted that it “also owes CDN$2.5 million in tuition to 14 Canadian universities.” The CBC notes that CDN$1.3 million of that is owed to one university alone, the University of Regina.

At the University of Regina, RSSDA scholarship students complained of feeling “abandoned” and “stressed.” Mr Poi said that the company would endeavour to keep its promises and appealed for patience, citing the oil price slump as the reason for the payment arrears.

A related November 2015 article in University World News suggests that Nigerian scholarship students in Canada are not the only ones suffering, estimating that “several thousand [Nigerian] citizens studying at various universities around the world are ‘stranded.’”

The president of the Association of Federal Government Doctoral Candidates in Russia revealed to University World News that “… students from Nigeria on scholarship in Russia and other countries, namely Morocco, Algeria, Cuba, Serbia, Turkey, China and Romania, are all stranded” because their scholarship stipends “had not been paid for the past six months.” The official excuse for the arrears, he said, was that the “budget is yet to be signed.”

Concern is also high among Nigerian scholarship students in the UK; some are worried about being sent home as part of an anticipated UK government plan to “repatriate” 29,000 Nigerians who lack required residency papers. And Nigeria News recently carried a story in which students anonymously spoke of their distress. One Mechanical Engineering student at the University of Huddersfield, said:

“We are on the verge of losing the opportunity given to us to come here and learn, go back to Nigeria and make our country a better place …. just because we cannot pay our school fees. It is a bad image for our government at the moment. Our landlords can no longer receive just one month rent from us because they believe that we could be sent back anytime soon. This has also affected other Nigerian students here. The country’s name, as well as that of the state, is at risk.”

Unfortunately, it appears that the fears of RSSDA-supported students abroad have now been realised. Some weeks after these prominent reports in late-2015, the Daily Post newspaper reported on an official RRSDA announcement that it could no longer continue to fully fund scholarship students abroad. RSSDA’s Executive Director Ominim Jack explained at a December media briefing that the declining value of the Nigerian naira, in combination with collapsing oil revenues, meant that the state would have to pull back its overseas scholarship support. “Today, we have to be realistic,” he added. “We all know what is happening in Nigeria. We now have a dwindling revenue both from [Federal Accounts Allocation Committee, a system of financial transfers between federal and state governments in Nigeria] and [state revenues]. We all know our exchange rates.”

Mr Jack outlined the state government’s response, which amounts to:

The Daily Post provides an initial response from parents of affected students as well. “My child is studying in Canada,” said one. “But how can somebody who is in her third year now return to Nigeria just like that? The curriculum can never be the same.” Another parent added, “For almost one year now, the state government has stopped paying the students their allowance. And we have been taking responsibility for that. We won’t mind to continue but the government should just pay the school fees. It is a very bad decision to withdraw all the students and place them in schools in Port Harcourt.”

For the moment, many of these reports revolve around RSSDA and its students abroad, and this is but one funding agency among many in Nigeria. As Mr Adedayo points out, “Other funding bodies of student scholarship are okay without any reported problems of delaying in payment of student fees and allowances, except payment delays from the bank which is due to the new economic policy of the current government on money transfer out of the country.”

Even so, the rapid deterioration of funding for RSSDA students will be a concern for families, agents, and institutions alike given the clear relationship between oil and gas revenues and scholarship funding for Nigerian students abroad.

From the field: The new student recruitment landscape in Saudi Arabia https://t.co/aBaRbaw7gX https://t.co/4vEUkJYjA9 - 5 days ago