The growing importance of pathway programmes

Pathway programmes, also commonly referred to as foundation programmes, are more and more on the radar of international educators in recent years. There is a fair bit of variability in the pathway segment but such programmes often share a couple of basic characteristics:

Pathway programmes do not result in an academic credential or other qualification but instead provide for an assured progression to undergraduate studies for students that successfully complete their foundation studies.

The pathway may be focused on a single institution, whether the student progresses to a single degree option at the university in question or is able to choose from multiple academic programmes. Other pathways operate on a “hub and spoke” model through which the student may exit their foundation studies and choose from a range of degree options at various partner institutions.

From a university’s point of view, foundation programmes offer a number of distinct advantages. First and foremost, they allow the institution to access a ready pool of qualified candidates, and to do so with a fair degree of confidence in not only their academic qualifications but also their English ability and readiness to succeed in an academic programme abroad. Writing in Inside Higher Ed last fall, Hans de Wit, the director of the Center for International Higher Education at Boston College (CIHE), noted foundation programmes as one of the basic strategies available to universities to “overcome the risk of admitting incoming students without adequate preparation or skills.”

Some pathway programmes are provided directly by the university, but many are offered in collaboration with a private-sector pathway provider. In those cases, the private partner also allows the university a way to ramp up international operations relatively quickly by bringing additional investment and marketing and recruitment capacity to the table, along with the option to outsource some or all of the foundation programme and service delivery.

From the student’s point of view, foundation programmes offer a more structured and certain path to degree studies abroad. They allow them to begin their studies at a lower level of English (the average IELTS requirement for pathway admission is 5.2, for example, against a more common range of IELTS 6.0-7.0 for undergraduate admission), and to strengthen both their language and study skills before beginning a full-time degree programme.

A recent study from StudyPortals and Cambridge English attempts to size the pathways market for the first time, and to identify some of its key characteristics and trends. Released in September 2015, New routes to higher education: The global rise of foundation programmes counted 1,192 English-medium pathway programmes as of January 2015.

The count is admittedly somewhat imprecise. It relies on foundation programme listings aggregated on PreparationCoursesPortal.com, a site operated by StudyPortals, and variability in course structure and degree pathways means that pathways may be counted differently from institution to institution. “Standard length and accelerated length programmes can be marketed as one programme or two programmes,” notes the report, for example. Further, “Some institutions market one programme, in which the student can then select different modules to determine the exact study content, whereas others market multiple programmes, with modules and study content pre-chosen by the institution.”

With those caveats in place, as of January 2016 the total number of pathways listed on the portal has grown to 1,443, an increase of nearly 17% over the past year alone.

The study estimates the global value of the pathway market at US$825 million per year, based strictly on estimated tuition revenue. The real economic impact of such programmes – factoring in accommodation and other direct living and travel expenses – is therefore considerably higher still.

Who, where, and how much

The vast majority of pathway programmes are offered in English-speaking countries. Looking strictly at number of available pathways, as opposed to enrolment or anything else, the UK is far and away the leading destination for foundation studies with 748 (63%) of the 1,192 foundation programmes tallied in the study. Oceania – that is, Australia and New Zealand – follows at a distance with 16% of all pathways and then North America with 12%. 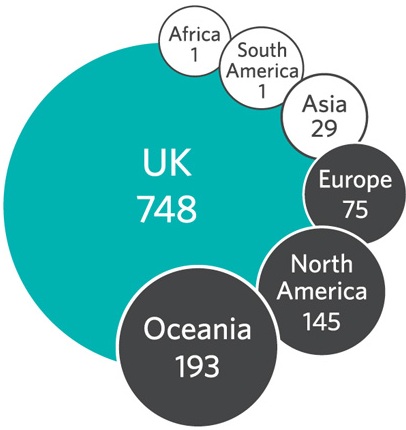 “Foundation programmes delivered by corporate providers are most common in the UK and Australia,” adds the report. “But are also found in Continental Europe (the Netherlands) and the United States.” 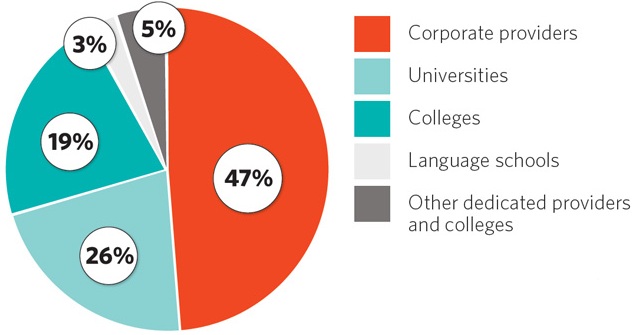 After private pathway providers, just over a quarter of foundation programmes are delivered directly by the universities themselves. Roughly another quarter are provided by affiliated institutions, including colleges and language schools.

Interestingly, the classification by provider type – whether private-sector provider or other – appears to correlate to tuition levels as well. “The lowest fees are in non-native English-speaking regions where corporate providers are less common,” notes the report. “The average yearly fee in Asia and Europe (excluding the UK) is US$8,000–US$9,000. In markets where corporate providers are prevalent (the UK and Australia) the average yearly fee is twice as high.”

While pathways are certainly less common in North America to this point, average prices in the region are also at the high end of the range, as illustrated in the following chart. 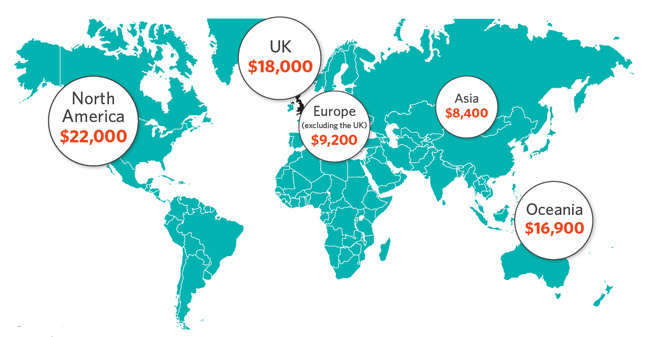 The study anticipates a further expansion of pathway programmes going forward, and identifies the US and Continental Europe as two regions where growth could be especially concentrated. There has been a dramatic expansion of English-medium degree programmes in Europe and this, the study authors conclude, now sets the stage for a corresponding increase in pathway courses, particularly in the Netherlands, Germany, and the Nordic countries.

Growth in the US, meanwhile, is expected to be driven by a growing interest in internationalisation on the part of American universities, and by some early examples of successful pathways in the States. Tim O’Brien, vice-president of global business intelligence and development at INTO University Partnerships, cited the case of Oregon State University in a recent interview with University World News: “They have gone from 4% international students to 11% in a matter of seven years, boosting their income from international tuition to US$100 million a year and going from having 970 international students to over 4,000.”

Among other impacts, the prospect of a significant expansion of pathways in these regions sets up an interesting competitive dynamic vis-à-vis the UK. By some estimates, as many as 40% of international students bound for undergraduate degrees in Britain begin their studies in a foundation programme. But the UK’s competitive position has been eroded in recent years by more restrictive immigration policies and by a political climate that has made the country – which has long been a leading global study destination – seem less welcoming of international students.

The thinking goes that a greater number of structured pathways into degree programmes outside the UK may further strengthen the position of competing destinations. Indeed, this may well become an important aspect of the pathway market in the years ahead as the availability and effectiveness of pathways into the degree programmes of a given destination come to play a greater part in its overall attractiveness to international students.