The Swedish government moved to introduce higher education tuition fees for non-European Union/non-European Economic Area students in 2011, and foreign student enrolment in the country promptly took a sharp downward turn. The decline was especially notable in the number of new, non-EU “free mover” students (that is, those enrolling outside of a formal exchange programme), which dropped from 7,390 in fall 2010 to 1,450 in fall 2011, the first intake for which non-EU tuition fees came into effect.

Fees currently average SEK100,000 per year (US$11,700) but with some notable variances among programmes and institutions. As University World News reported recently, “Some institutions charge higher fees, such as the University College of Arts, Crafts and Design in Stockholm which charges SEK285,000 (US$33,300), and the KTH Royal Institute of Technology in Stockholm which charges [US$28,300] for courses in architecture.”

Reflecting the sudden shift in 2011 from “free” to “hundreds of thousands of Swedish krona”, total student numbers, including both EU and non-EU enrolments, continued to decline through the 2013/14 academic year.

However, the latest data from the Swedish Higher Education Authority (UKÄ) also illustrates that the numbers of new non-EU students began to slowly increase immediately after the 2011 crash and notably accelerated in 2014. The number of new non-EU students enrolling with Swedish institutions grew by 46% between fall 2013 and fall 2014. In absolute terms, this resulted in an increase of 830 new students (from 1,810 in 2013 to 2,640 as of fall 2014). 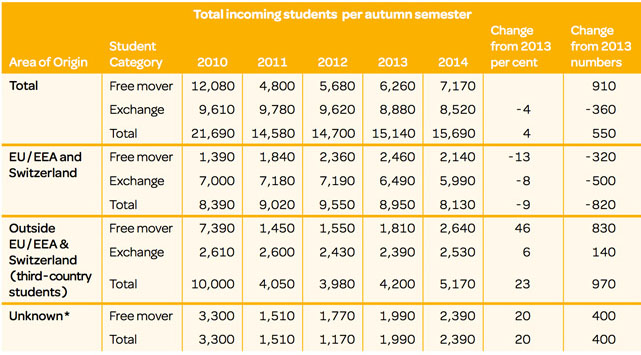 International student commencements for Sweden by region of origin and category, fall 2010 to fall 2014. Source: UKÄ

The UKÄ adds of recent-year commencement trends, “[The introduction of fees for non-EU/non-EEA students] led to a decline in the total number of new incoming students of one-third between the autumn of 2010 and 2011, from 21,690 to 14,580. Since then there has been a slow increase and in the autumn of 2014 the number of new incoming students was, as stated above, 15,690.”

There are three important qualifiers to add to the table above. First, it is entirely concerned with student commencements – that is, it counts only students who are beginning their studies in Sweden for the first time – and so does not reflect the overall enrolment trends for both new and continuing students.

Second, it looks at student commencements for a specific point in time (fall intake) as opposed to enrolment recorded for the entire academic year (whereas academic year is the period of reference used in the preceding chart).

Finally, the chart distinguishes student commencements not only by region of origin (students from the EU and European Economic Area as well as those from Switzerland remain exempt from fees), but also for two categories: free movers and exchange students.

The following graphic breaks down student mobility from a Swedish perspective. Within this framework, non-EU/EEA free mover students are the ones that are now obliged to pay international student fees in Sweden. 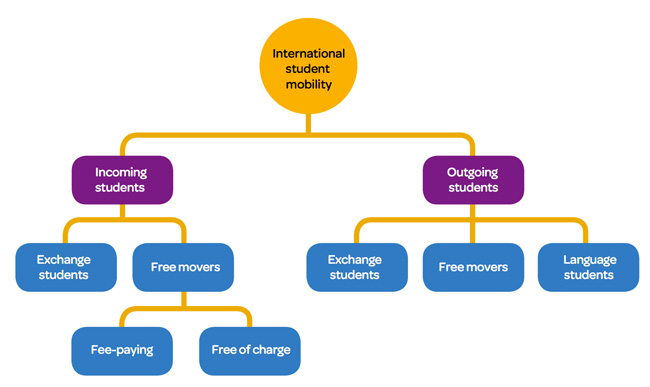 With this broader perspective on student mobility squarely in mind, let’s step back from looking only at commencements to consider the more comprehensive enrolment pattern for fall 2014.

While Sweden’s fee-paying students come from 107 countries, 25% are from China and another 14% (about 500 students) are from India. The number of Indian students in Sweden has reportedly quadrupled since 2011.

University World News notes as well that this segment of Sweden’s international enrolment is highly concentrated among only a few universities. “Half of the fee-paying students are attending four Swedish universities: Lund University (578), KTH Royal Institute of Technology (503), Chalmers University of Technology (308) and Uppsala University (301), while the other half is distributed among 25 universities and colleges.”

If we think in terms of fall enrolment from year-to-year (as opposed to counting students for the full academic year), the total number of incoming students rose for the first time since 2011 to reach 25,400 in fall 2014.

So there are a couple of countervailing trends at work here:

It will be interesting to see if that increase for fall 2014 translates into overall growth for the 2014/15 academic year.

There are, however, other factors that have prevented the increasing numbers of fee-paying students from having a greater impact on overall mobility figures. First, up to fall 2014 the year-over-year increases in fee-paying commencements have been too modest to influence larger enrolment trends in the country. At the same time, Sweden has also seen some declines in the number of incoming exchange students and these have largely offset any gains from increased fee-paying enrolment.

Sweden has been a ready case study of the effects of introducing (or dramatically raising) international student fees, and it has certainly been a commonly cited example in the debate over international tuitions in neighbouring Finland. However, the Swedish experience, particularly the ongoing recovery of its fee-paying enrolment, provides other important lessons as well.

To begin, the Swedish example illustrates the value of sustained marketing and recruitment. Several Swedish institutions began recruiting more actively in the wake of the 2011 fee change and their efforts have been rewarded in the years since with growing numbers of fee-paying students.

The impact of increased recruiting is particularly notable for postgraduate programmes with non-EU/non-EAA applications to master’s programmes increasing by 25% since 2011.

In conjunction with the introduction of non-EU/non-EEA tuition fees, the Swedish government also moved to expand scholarship support for incoming students. In total, the government currently provides about SEK250 million (US$30 million) in scholarship and grant funding for foreign students.

Along with this expanded financial aid, Sweden has also moved to expand work rights for international students in Sweden. Students are now permitted to work during their studies, to remain and work in Sweden after graduation, and, particularly in the case of doctoral students, to pursue permanent residency in the country.

Finally, there has also been a significant expansion of English-taught programmes within Swedish higher education institutions over the past decade. There are more than 800 such programmes in Sweden today (only Germany and the Netherlands have more among European countries), representing nearly a quarter of all university programmes in the country.

These measures suggest a cohesion in the efforts of Swedish policy makers and institutions to further internationalise higher education in the country, and as such they represent a valuable example for many study destinations regardless of fee policy.

This entry was posted in Europe, Higher Education, Regions, Sweden.