A recent survey by the German agency association FDSV (Fachverband Deutscher Sprachreise-Veranstalter) has found that the number of Germans going abroad for language study declined slightly last year (a 1.4% decrease between 2013 and 2014). An online survey by FDSV gathered responses from 26 agencies (both members and non-members), who collectively sent 46,358 language students abroad in 2014. The survey was part of a larger research effort undertaken with the University of Heilbronn that included 96 language travel companies (77 language travel operators and 19 travel agents).

Behind the slight decline in the number of German language students abroad, however, is a more balanced picture of demand across various age groups in Germany, as well as signs of market growth. The average amount Germans spent on a language holiday in 2014 was €1,308 (US$1,382), an increase of 8.6% over 2013. The market was valued at €186 million (US$196 million) in 2014, with an estimated 160,000 students going abroad that year.

The main factor in the decrease in the number of Germans going abroad to learn a language in 2014 was the 14-17-year-old demographic: while these young Germans accounted for 53.2% of language travel trips in 2013, they represented 41.6% of bookings for 2014.

The fall-off among the 14-17 age group appears to be the result of a recent restructuring of the German secondary school system that has seen nine years of high school shortened to eight. The more intense school schedule makes it harder for students to study abroad for extended periods during secondary school. Fewer students in this age group are going abroad as a result and those that do may be more likely to be attracted by shorter courses.

By contrast, Germans aged 18–30 became more likely in 2014 to travel to study a language: accounting for 23% of bookings that year versus 17% in 2013. Another significant increase: 6-13-year-olds made up 17.3% of German language students in 2014 versus just 1.9% in 2013. FDSV is optimistic about this trend for 2015, noting that “parents are increasingly investing in their children’s education and allowing their offspring to experience study abroad earlier and earlier.”

The vast majority of German language students abroad are studying English (84%), and younger students compose most of the bookings for the language (90.6% for those 17 years and younger versus 70.5% of those 18 years and older). Spanish is the next most popular language, but in this case it is German adults who are more interested in learning Spanish (13.5% versus 1.9% of younger students). The same trend is evident for French (7.6% versus 3.8% of youth) as well as Italian (4.4% versus less than 1%).

The UK is the leading destination 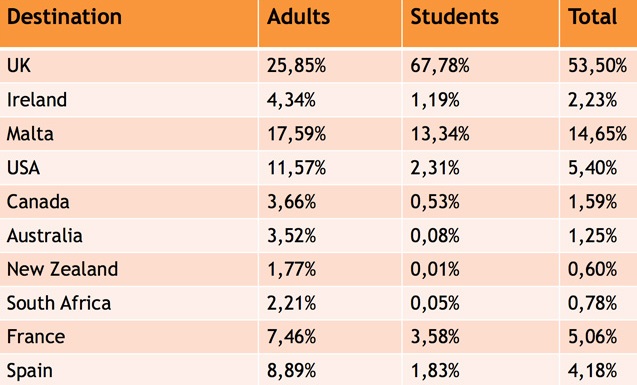 When German students travel farther from home to study English, they tend to stay longer than when they go to the UK. On average, students spent two weeks in the UK versus 4.3 in Australia and 5.2 in New Zealand; Germans also spend more time learning languages in Asia than the overall average.

Meanwhile, when German students (especially young ones) go to nearby German-speaking countries, they are most likely to stay for just a week. The FDSV attributes these brief stays to the “short and uncomplicated journeys” enabled by the proximity of these countries to Germany.

Across all destinations, the average length of stay for German language travellers is two weeks.

Only 1.9% of all Germans who travelled in 2014 to learn a language expressed complaints about their experiences, which the FDSV considers low “especially when one considers the complex travel services” involved in making study abroad trips. They noted that student satisfaction also involves having a “positive experience of accommodation in private houses as well as satisfaction with the language teaching and teachers.”

Julia Richter, from FDSV, says that while the traditional format of 20 lessons for a language course combined with accommodation in a host family’s home is still the first choice for students as well as for adults, English boarding schools are becoming a more important option as well, especially for younger students.

Catering to these mature groups comes with challenges and opportunities; comfortable – and for some wealthier students, luxury – accommodation and recreational activities such as theatre, art galleries, etc. become more important with students’ more advanced age.