The Organisation for Economic Co-operation and Development (OECD) released its annual report on global education trends last week. Education at a Glance 2015 draws on a wealth of data to map educational attainment, participation rates, outcomes from education, and other key indicators for countries around the world.

The number of foreign tertiary students enrolled worldwide increased by 50% between 2005 and 2012. As many as 4.5 million students were enrolled outside of their home countries in 2012 and the total number is estimated to have surpassed five million by this year.

The report notes, “Student mobility has increased dramatically over the recent past, due to a range of factors. The exploding demand for tertiary education worldwide and the perceived value of studying at prestigious post-secondary institutions abroad contribute to an increasing and diversified flow of international students, ranging from those who cannot find a place to study in post-secondary education at home to students of high academic achievement studying at high-quality programmes and institutions. In addition, the educational value associated with a diverse student body, the substantial revenues that can be earned by expanding education for international students, and economic and political considerations prompted some governments and institutions to make major efforts to attract students from outside their national borders.”

Asia is the engine of growth in global student mobility

It was the region of origin for 53% of all international students in 2012/13, and China and India remain the world’s first and second-largest source markets. “Asia is dominating,” said Andreas Schleicher, Director of the OECD Directorate for Education and Skills.

“That is where you can see the hunger for learning. Parents want their children to get a better education and they still quite often choose countries in the Western world, in OECD countries, to obtain those qualifications.

It may change in the future but at the moment that is still by a large margin the most dominant source of international students, followed by Europe, and with a large gap by Africa.” 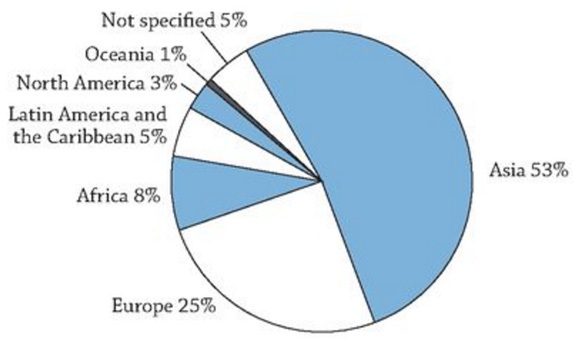 Distribution of international students in tertiary education by region of origin, 2013. Source: OECD

The US remains the leading study destination but, while absolute numbers of foreign students in America continue to increase, its market share has fallen. “That share is declining in the United States,” adds Mr Schleicher. “The market is dividing up quite differently with countries like Japan [and some European countries] getting a larger share.”

More broadly, Australia, Canada, France, Germany, Japan, and the United Kingdom together receive more than 50% of all international students worldwide and OECD countries attract 73% of all students enrolled abroad.

Education at a Glance 2015 has some thought-provoking new observations as well. In particular, it highlights the growing importance of post-graduate programmes and the higher proportions of international student enrolment at advanced levels of study.

The OECD speculates that the following factors may be contributing to greater proportions of internationally mobile students in advanced studies:

The following chart makes the point quite vividly that while foreign students may represent a relatively small proportion of total undergraduate enrolment in a major destination like the US, their participation rates are much higher at the master’s and doctoral levels. 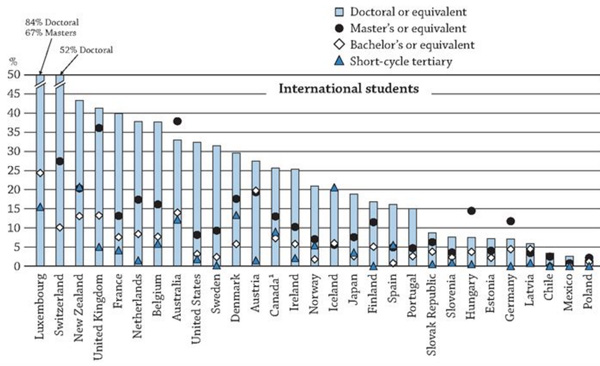 International student enrolment as a percentage of total tertiary enrolment in OECD countries, by level of study, 2013. Source: OECD

The report also gives passing attention to a possibility that has begun to play on the minds of international educators in recent years: can the market keep growing as quickly as it has? More to the point, what happens if growth slows significantly?

There are a variety of inter-related demand factors that influence demand patterns for study abroad, including domestic capacity, economics, demographics, labour market requirements, and immigration policies. And on the question of future trends, OECD says only, “In the current economic climate, shrinking support for scholarships and grants, as well as tighter budgets for individuals, may slow the pace of student mobility.”

The report does go on, however, to explore the different elements that drive student decision-making around study abroad and it distills these down to the following decision factors:

Overall, the OECD’s findings for 2015 reflect a global marketplace for education that continues to expand, but that is also increasingly complex.

The global education market is also characterised of late by more varied patterns of mobility. China, for example, remains the world’s leading source of mobile students but is now also an important study destination in its own right. The same is true for Malaysia and a number of other regional destinations around the globe.

Growth rates and other high-level market trends will continue to hold our attention in 2016. But this expanding range of shifting market conditions will also challenge and engage international educators in the years ahead.