Fastest growth in 35 years for international enrolment in US

The number of international students enrolled in US higher education grew by 10% in 2014/15 – marking the ninth consecutive year of enrolment growth for the US and the biggest year-over-year jump in 35 years. All told, the number of foreign students in US higher education institutions reached 974,926 in 2014/15, for an overall increase of 88,874 students compared to the year before. Meanwhile, the number of commencements – the all-important measure of students enrolling for the first-time in US institutions – reached 293,766 for an increase of 8.8% over the year before.

The report clearly affirms the US’s continuing status as the world’s leading international study destination. Consistent with its market share in recent years, America hosts roughly one out of every five higher education students enrolled outside their home countries today.

Also in keeping with recent-year trends, China, India, and Korea account for just over half of all foreign enrolment at US higher education institutions. While Korea remains the number three sending country for the US, the number of Korean students fell again in 2014/15 with a year-over-year decline of 6.4%.

The real story this year, however, is the more rapid growth from India. The number of Indian students reached 132,888 in 2014/15 (and 13.6% of the total foreign enrolment for the year). However, that also represents a 29.4% increase over 2013/14 and reflects a growing trend that we have been watching with interest over the last year or so.

“Indian students have always been very attracted to the availability of excellent science and research facilities on US campuses and also within US industry,” Rajika Bhandari, IIE’s deputy vice president for research and evaluation, said this week to Inside Higher Ed. “Students are finally beginning to recover from the steep devaluation of the rupee against the dollar some years ago. While the rupee still remains weak, the fluctuation has stabilised to some extent, therefore allowing more students to afford a US education.”

The growing numbers of Indian students in the US have now also begun to influence other broad trends in international enrolment. Nearly two-thirds (64%) of Indian students are enrolled in graduate programmes and this is contributing to a shift in the undergraduate-graduate mix in US institutions.

Outside the top three

Saudi Arabia was the number four sending country in 2014/15, accounting for 6.1% of all international enrolment in the US, after which the share for individual source markets drops off sharply. As the following table reflects, no country after Saudi Arabia has more than a 3% share of total foreign enrolment. 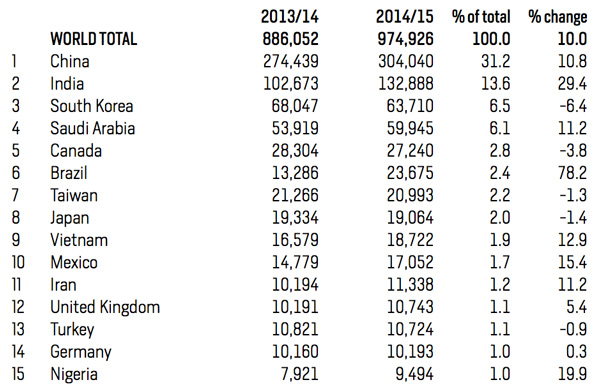 Foreign-funded scholarships played a big part in overall enrolment growth this year as well. Saudi Arabia was up 11.2%, in no small part due to continuing support for long-established (and massive) Saudi government scholarship programmes.

The number of Brazilian students, meanwhile, jumped by 78% in 2014/15 as Brazil’s ambitious Science Without Borders scholarship programme continued to take hold (the immediate future of this important programme was thrown into question with recent reports that new scholarships would be suspended in 2016).

Kuwait, just outside the top 15 source markets in the number 16 spot, saw a 24% increase in enrolment this year and again with government scholarships as an important factor.

Within the top 15 sending countries noted above, Vietnam, Mexico, Iran, and Nigeria also registered double-digit gains in US enrolment for 2014/15. Latin America and the Caribbean, meanwhile, was the fastest-growing region for the year, with a 19% increase that appears to have been driven in part by major mobility initiatives between the US and a number of Latin markets.

Open Doors 2015 also highlights the continued growth in outbound mobility from the US, a subject of particular interest for the IIE which is helping to spearhead national mobility initiatives for American students.

A total of 304,467 American students studied abroad for academic credit in 2014/15. This represents a 5% increase over the year before, and the greatest single-year increase since before the 2008 economic crisis. “We are excited to see that record numbers of students are taking advantage of international education opportunities, and we applaud the efforts of US higher education as we work together to increase the number of American students who study abroad,” said Evan Ryan, Assistant Secretary of State for Educational and Cultural Affairs at the US Department of State. “It is critical that we continue to make study abroad more accessible. These exchanges strengthen ties between the United States and countries around the world. By increasing accessibility to study abroad, we are investing in our future and providing a forum to solve global challenges.”

In a related development, NAFSA recently released an analysis that measures the economic impact of international students in the US at US$30.5 billion for 2014/15. NAFSA estimates as well that the sector currently supports 373,381 American jobs.

The economic benefit arising from international students in the US (indicated in green) related to the number of jobs supported (brown line) and total international enrolment (blue line). Source: NAFSA

Please see the NAFSA website for more detailed analysis by state or region, and the following infographic for additional background on key international enrolment trends in the US.