Nearly seven in ten European universities report an increase in non-European Union enrolment over the past five years; a slightly smaller percentage reported an increase in EU enrolment as well. Just over 40% felt that a “stronger emphasis on widening access and participation” was behind the growth in student numbers. However, a similar percentage (39%) put the increase down to expanded international recruitment.

Student numbers on the up

Trends 2015 highlights the European Union’s commitment to educate at least 40% of 30-34 year-olds at degree level by 2020 – alongside an earlier research finding that 12 EU members had reached that level of higher education participation as of 2012 (relative to an EU average of 36% by that year). “Many countries in Europe,” the report adds, “have been interested in broadening participation and access to higher education.”

Perhaps it is therefore not surprising that 62% of survey respondents reported an increase in enrolment over the past five years with 42% reporting growth of more than 10% since 2010. In contrast, only 19% reported a decrease in student numbers with 9% indicating a decline of 10% or more.

“The largest enrolment gains are found in Belgium, Denmark, Norway, Switzerland and Turkey; smaller but still significant growth is expected in Austria, France, Germany, the Russian Federation and Ukraine,” adds the report. “The largest decreases are found in the Czech Republic, Lithuania, and Slovakia.”

This summary reflects a broader pattern of migration fueled in part by the prolonged economic crisis in Europe. The percentage of Europeans residing in another member state has been steadily increasing since 2010, resulting in two particularly notable flows of migrants from the south to the north, and, to an even greater extent, from the east to the west.

This reflects that economies in southern and eastern Europe have been more profoundly affected by the downturn, and this is indicated in the survey responses as well in that institutions in both regions reported greater impacts of economics and demographics on their current and future enrolment prospects.

“The weak economic outlook has been accompanied by an increase in youth unemployment in many parts of Europe,” adds Trends 2015. “It peaked at 50% in Spain and 60% in Greece in 2014 and was estimated to have reached five million across the European Union in August 2014.

This has prompted many governments, the European Commission and the Organisation for Economic Co‑operation and Development (OECD) to emphasise the need for closer links between universities and industry, to stress innovation policies and graduate employability.”

It has also, it would appear, contributed to an increasing demand for professional qualifications among European students. Nearly four in ten survey respondents (38%) reported increased demand over the last five years for studies leading to a professional degree in fields such as business, engineering, or law.

The following chart provides a little more nuance for the earlier finding of increased enrolment for a majority of responding institutions. It highlights that 69% of European universities reported an increase in non-EU enrolment since 2010. Riding along with this, 64% also indicated an increase in enrolment by EU students. “The growth of international students, both EU and non-EU, is the most frequent change that has occurred,” adds the report, “notably in Austria, Ireland, Lithuania, the Netherlands, Norway, Poland, Portugal, Switzerland and Turkey.” 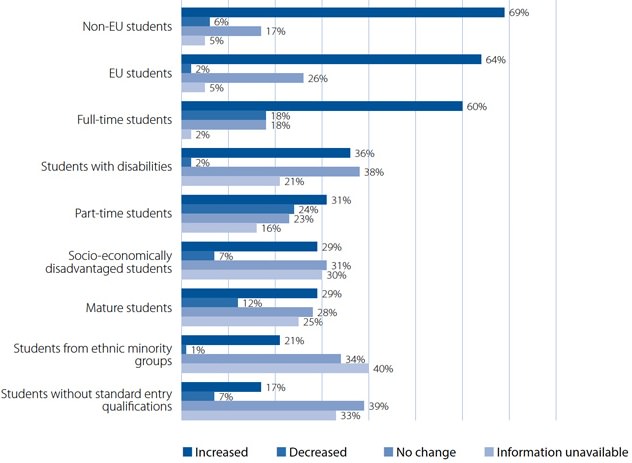 The changing composition of the student body of European universities, 2010 to 2015. Source: European University Association

When asked what they felt most contributed to any increase in enrolment since 2010, respondents cited “stronger emphasis on widening access and participation” (41%), “international recruitment” (39%), and “changes in admissions policies” (28%) as the top factors. 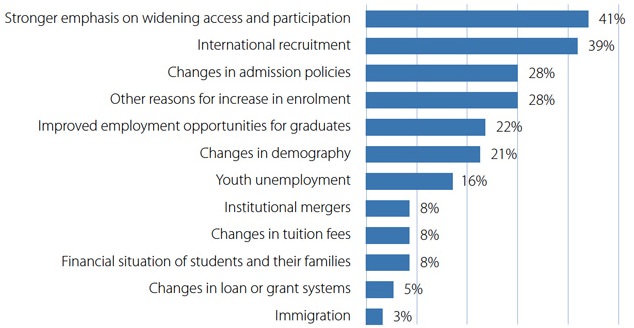 The report highlights a related research finding that expanded international recruitment has become an increasingly common response to the economic crisis for European universities, both as a means to increase revenue and diversify funding sources.

Trends 2015 acknowledges that expanded international recruitment may be linked to the possibility of recovering higher fees from non-EU students but notes as well that recruitment activity is on the rise even in countries without such fee differentials.

“The new economic reality – the economic crisis, youth unemployment, the requirements of the knowledge society, globalisation – has led to renewed and additional emphasis on increasing student participation,” concludes the report.

“The composition of the student body is changing as a result of institutional strategies, particularly due to the major efforts being undertaken to recruit international students from both EU and non-EU countries…Where drops in enrolments occur, they are attributed to demographic change and the students’ financial situation, especially in eastern and southern Europe.”