As the European Union’s sovereign debt crisis continues to unfold this year, there are increasing signs that economic uncertainty at home is further encouraging students from the most-affected nations to pursue studies abroad.

There is now an emerging north-south divide within Europe as students from countries such as Spain, Portugal, Greece, Ireland, and Italy are increasingly looking at study and work opportunities in more stable economies – notably the Netherlands, the UK, Germany, and Sweden – as a way to avoid the worst of the economic downturn in their home countries.

The Telegraph reported this month that demand to study outside their own country is up by more than 180% among Italian students, 162% from Greeks, 157% from Spaniards and 140% from Portuguese students.”

Those students are motivated not only by the availability of their desired programmes of study, particularly those given in English, but also by opportunities to remain in their host country to work after graduation. The intention to remain after graduation for work is well established among a sizable proportion of international students, but it is being amplified in the Eurozone now as many students face poor employment prospects and severe austerity budgets at home.

In fact, there is increasing evidence that university-age students are bearing the brunt of the economic crisis in Europe. Youth unemployment rates have soared across Europe, doubling by some measures over the last four years, and are continuing to rise faster than overall jobless rates.

An unemployment rate of over 50% in Greece and Spain only indicates what is occurring among a relatively small fraction of the total youth population: the group that is actively working or seeking work.

It ignores others who are choosing not to participate in the job market, perhaps because they are students, stay-at-home parents, too discouraged to look for work, or any other reason.

The unemployment ratio is important because it removes differences in participation rates between countries. In Spain, 39.5% of young people are working or actively seeking a job, while only 29.3% are in Greece.

The ratio accounts for this difference by including everyone – job market participants or not – in the equation. When viewed in this light, the youth unemployment ratio, which is the number of jobless youth as a percentage of the total youth population, is just 15% in Greece and 20% in Spain.

However, two trends stand out: even by this more tempered measure of youth unemployment, joblessness among university-age students…

The European Commission provides the following summary of youth unemployment trends through 2011:

“The youth unemployment rate in the EU-27 was around twice as high as the rate for the total population throughout the last decade.

A casual review of the following table reveals that youth unemployment is sharply higher in some parts of Europe – again, Spain (19%), Greece (13%), Portugal (11.7%) – relative to others, such as the Netherlands or Germany, where jobless rates among young people are tracking closer to 5%. 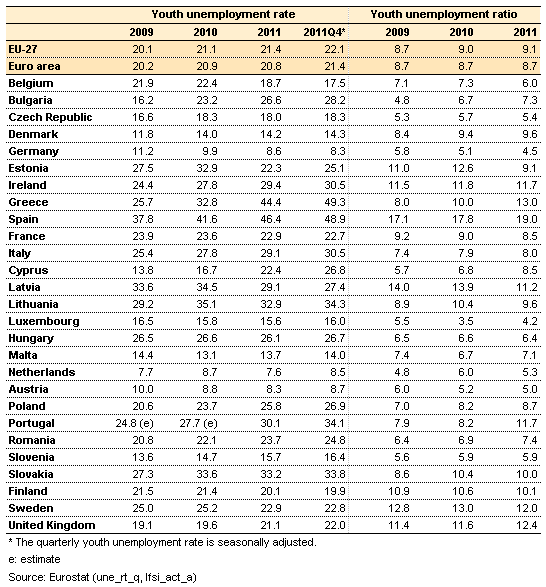 Perhaps it should come as no surprise then that a recent study conducted by university student associations in Portugal found that a staggering 69% intend to emigrate after graduation. Or that the EU-funded study abroad website Study Portals has reported that enquiries from Greece, Italy, Spain, and Portugal have soared by more than 80,000 in 2012 compared to last year.

Newly introduced austerity budgets in many of these countries are further fueling the drive to study abroad – many of which will have profound implications for state funding of higher education institutions as well as public spending on research and innovation. Spain, for example, recently announced its intention to cut science and research spending by 25% in 2012 alone, and its popular Becas scholarships have been cut year on year.

“Under the plans,” reports Times Higher Education, “Public research institutes, training schemes, and fellowship programmes are all likely to be hit hard… The heads of some of Europe’s leading research-intensive universities have warned Spain’s government that significant cuts to its science budget may lead to an exodus of researchers from the country.”

Economists and others are now raising the alarm for what this outflow of academics, researchers, and students will mean for the education systems and economies of their home countries. And persistent patterns of relative underemployment or unemployment among youth are equally a concern in terms of the long-term economic or social outlook for any country.

In the near-term, however, dramatic spending cuts and rising unemployment rates at home are expected to boost student mobility across Europe, both to more stable EU economies and to other attractive international destinations, particularly those that afford European students the opportunity to stay and work following graduation, such as France or Germany.