The number of British students studying abroad is growing, and it looks like that will continue, with a new British Council survey showing that just over a third of UK university students are interested in study abroad.

The Higher Education Statistics Agency (HESA) reports that 28,640 students went abroad in 2013/14. This was a record-high level of outbound mobility for the UK, and represents a 58% increase over the 18,105 students who went abroad the previous year. There are, however, two important qualifiers attached to this impressive growth:

The more detailed information on study abroad now collected by HESA also points out that the vast majority of UK-domiciled students abroad (83%) are enrolled in study programmes, as opposed to work or volunteer assignments overseas. An even larger majority (96%) are undergraduate students.

Regardless of methodology changes, it seems clear that the number of British students abroad has climbed steadily over the past several years. An independent analysis from Kingston University’s Joan-Anton Carbonell points to an increase of 8,000 students (roughly 40% of the estimated 20,064 students abroad in her latest tally) over the six years up to 2012/13.

UK participation in the Erasmus mobility programme has also grown steadily, with 15,566 students abroad on Erasmus study and work placements in 2013/14. This represents an increase of 6.8% over the previous year and growth of 115% since 2007.

Needless to say, even with that growth there remains a significant gap between the 493,570 foreign students that the UK hosted in 2013/14 and the number of students it sent abroad that year. “The idea that the internationalisation of higher education is simply comprised of student recruitment is not only outdated, but also ultimately is incorrect,” says the British Council.

“Outward student mobility is essential at the individual level for growth personally and among one’s peers, at the institutional level for diversification and knowledge sharing, and at the national level as an investment in human capital and long-term relationship building.”

Indeed, a 2013 report found that more than half of UK employers were unhappy with the foreign language abilities of UK graduates and 47% were concerned about graduates’ cultural awareness.

This persistent and considerable gap between inbound and outbound has led the British government to establish a UK Strategy for Outbound Mobility, a national effort to improve awareness of and access to international study opportunities. “Outward mobility is on the rise, however there is still more to be done,” said Vivienne Stern, Director of the UK Higher Education International Unit.

“If we want to encourage our students to spend time abroad whilst at university we need to better understand their motivations and what dissuades many others from taking advantage of opportunities.”

A new report from the British Council – Broadening Horizons: The value of overseas experience – aims to do just that. It draws on a 2015 survey of 2,856 full-time, UK-domiciled university students (most between 16 and 30 years old) for a series of important insights.

Those respondents to the 2015 survey who wanted to go abroad also preferred to go for longer periods: 47% stated they would want to study for a year, and 26% wanted to pursue a full degree outside of the UK. A strong majority (59%) were interested in studies at the undergraduate level.

The US remains a top choice for British students, with 40% of respondents indicating the US as their preferred destination. Interestingly, however, 42% of respondents to the 2015 survey who wanted to go abroad also expressed interest in going to non-English-speaking countries (an increase of 4% compared to a previous survey from 2014).

The US hosted 10,191 UK students in 2013/14 and the UK remains in turn the leading destination of American students abroad. Broadening Horizons adds, “According to UNESCO… the top destination for UK students is the US, followed by France, Ireland, Germany and Australia… [However,] according to the UK Higher Education International Unit, 70% of UK undergraduate student mobility takes place in Europe, with 25% of students studying in France, 17% in Spain and 9% in Germany; 12% of UK students study in the US, making it the number three destination for undergraduate study abroad.”

The survey found that the cultural experience of studying abroad was a significantly stronger driver for UK students than were academic or employability-related factors. As the following chart illustrates, the most important factors in selecting a study destination included wanting to experience the culture (61%) and wanting to travel there (55%). 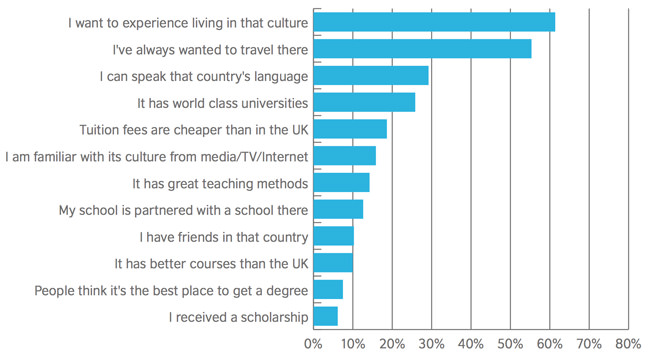 “The top academic drivers for study abroad were to gain credits for study (61%) and to improve language skills (45%),” adds the report.

Costs, personal well-being, and a lack of foreign language skills, meanwhile, were the main concerns cited by students interested in study abroad.

Perhaps not surprisingly, funding support (71%) and language training (40%) were the most-cited factors among “not interested” or “undecided” respondents when asked what would encourage them to consider study abroad.

There is also a clear indicator in the survey results that not all students have the information they need to make an informed decision. Only 56% of those aspiring to go abroad, 32% of those who didn’t want to go, and 14% of those who were undecided indicated that they had adequate knowledge on which to base their decision.

Zainab Malik, Research Director of the British Council’s Education Intelligence service, and author of the Broadening Horizons report, said, “Our research shows the top perceived barriers to study abroad for UK students were costs and a lack of language skills. However, students we had surveyed who had already studied overseas said that, in retrospect, those concerns were not as substantial as they initially had thought. Their experience, coupled with accessible information, indicates that these barriers might be mitigated or even overcome.”