India driving growth in applications to US graduate schools

International student applications to US graduate schools are up modestly this year, driven largely by surging student numbers from India, strong demand for advanced science and engineering programmes, and the continuing drawing power of American research universities.

The number of Chinese applications, however, declined for the third year in a row, blunting the overall growth trend and raising concerns for US institutions that continue to rely heavily on China for graduate enrolment.

These are some of the key findings of the 2015 CGS International Graduate Admissions Survey: Preliminary Applications, the latest in a series of surveys from the Council of Graduate Schools (CGS). The 2015 Preliminary Applications survey tracks trends for fall 2015, and is an important indicator for the overall volume and trends in admissions offers to international applicants as well as actual enrolment in US graduate programmes.

The 2015 survey gathers responses from 377 US institutions which together accounted for about 70% of all graduate degrees awarded to international students in the US in 2012/13. All told, 676,484 international candidates applied for admission in the US for fall 2015. This is a 2% increase over fall 2014 and marks the tenth consecutive year of growth in application volumes. As the following charts reflect, however, growth has slowed in two of the three most-recent years of the survey.

Perhaps more importantly, the important changes in sending markets that we began to observe over the last couple of years have continued in 2015. Chinese applications are down by 2% this year, continuing a declining trend that began in 2013. In contrast to this, the number of Indian applications increased by 12% for fall 2015 and for a third consecutive year of double-digit growth. 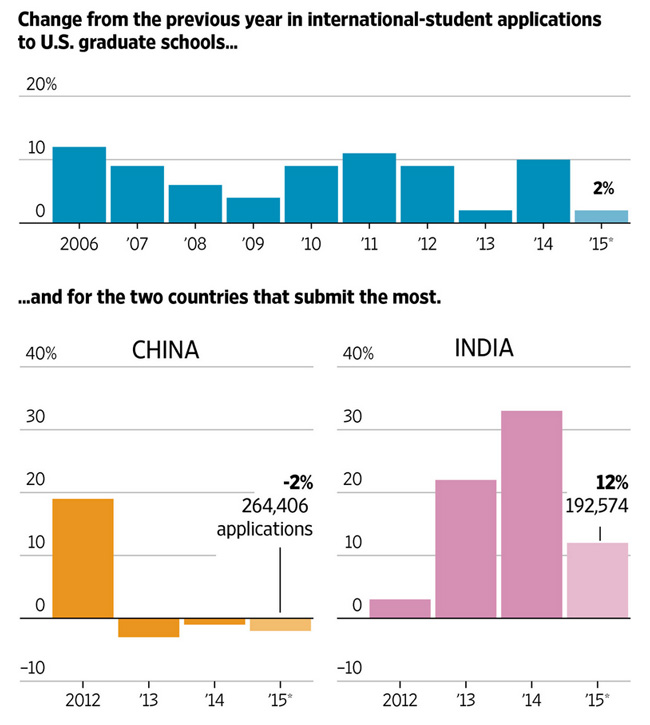 This is arguably the biggest story with respect to international enrolment in US graduate schools. China and India account for two-thirds of all international applications for fall 2015. While China remains the clear leader among sending markets, India has narrowed the gap over the past three years. 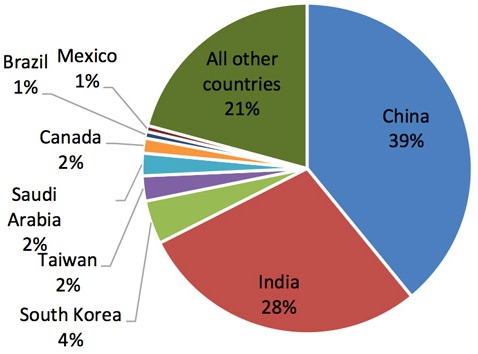 International applications to US graduate schools by country of origin, fall 2015. Source: CGS

The CGS survey echoes other trend reports that have noted Indian outbound numbers growing more quickly than those from China. The countervailing Chinese and Indian growth trends also reflect an important shift in the quality and capacity of graduate programmes offered by Chinese universities, and the fact that more Chinese students can now find solid graduate programmes at home.

“China has been investing pretty heavily in its higher education capacity for both graduate education and research,” said Jeff Allum, the author of the 2015 survey report and CGS’s Director of Research and Policy Analysis. “I suspect that might be one reason why the number of applications from China appears to be going down, but there may be other reasons that quite frankly we’re not fully able to explain yet.”

The same is not yet true for India, however, and it is one of the reasons that the country is expected to be a key driver of postgraduate mobility over the next decade.

On another bright note for US graduate schools, applications from Mexico and Brazil were up for fall 2015 – 8% and 4% respectively – and South Korean applications also increased by 4% after three consecutive years of decline.

Level and field of study

For the first time, the 2015 CGS application survey breaks down application trends by degree objective – that is, the proportion of applications for masters programmes as opposed to doctoral studies – and there are some notable differences among sending markets.

In contrast to this, applications from South Korea run heavily toward doctoral programmes (70%). More broadly, the majority of applications from Europe (65%) are for PhD studies, as are those from the Middle East and North Africa (62%).

Across the board, STEM subjects (science, technology, engineering, and maths) account for half of all international graduate applications in the US for the fall 2015. Engineering is the leading field by far, with 34.26% of all applications for fall 2015 and a 4% increase over fall 2014.

Meanwhile, applications for business programmes, the next most-popular field of study outside of the STEM subjects, fell by 2%.

Research universities the engine for growth

In another first for this year, the CGS survey also breaks down international applications by institution type. Universities classed as having “very high research activity” received the vast majority of international applications (83%) for the year. As the following table illustrates, the drawing power of these institutions was also a key factor in the overall growth recorded for fall 2015.

It should be noted that the survey is a preliminary indicator of international graduate enrolment in the US. It tracks the numbers of applications as opposed to applicants, and a single student may apply to multiple institutions. Partly for this reason, preliminary application data is not a perfect indicator of actual enrolment results. The two trends, however, do generally track closely with one another over time.

In keeping with its established survey and reporting cycle throughout the year, CGS will release further data on application trends, admissions offers, and actual enrolment later this year.