Students and higher education institutions in Finland are caught up in the austerity measures their government is preparing to impose. The Finnish economy has been contracting for the past three years and is currently experiencing some of the worst fiscal challenges in the Eurozone due in part to reduced trade with Russia.

The austerity measures affecting higher education in Finland include:

Tuition fees for international students may be introduced

In addition, international students from outside the European Economic Area (EEA) may soon be paying tuition fees if they choose to study in Finland.

When we last reported on Finland, the government had just backed away from a plan to introduce fees for non-EEA students and decided instead to refer the matter of whether or not to introduce such fees to a ministerial working committee for consideration.

On 27 May, however, it revealed that tuition fees are indeed intended for non-EEA students – but it has to this point been somewhat vague about its plans.

Study in Finland reports the following:

“The governmental programme mentions possible tuition fees for non-EU/EEA students, but at this stage only states some very general terms, suggesting 2016 or 2017 as a preliminary introduction timetable. The governmental programme does not in any way specify the extent of the suggested fees, but does briefly mention that in case fees would be introduced, a new scholarship system should also be created.”

The flip-flopping on the issue of non-EEA tuition fees is creating a climate of uncertainty for Finland’s higher education institutions, which have been welcoming more students from outside the EU and EEA in recent years, especially from Asia and Africa.

Finland hosts roughly 20,000 international students today, including both exchange students from within Europe and visiting students from beyond the EEA. UNESCO statistics based on the year 2012 show the following 15 countries as the top source markets for Finland, representing nearly 70% of international enrolment in the country:

The non-EEA markets on this list account for about 60% (or 10,431 students) of all foreign students in Finland.

The uncertain climate for Finnish universities regarding the issue is reflected in the following screen capture from the Study in Finland website: 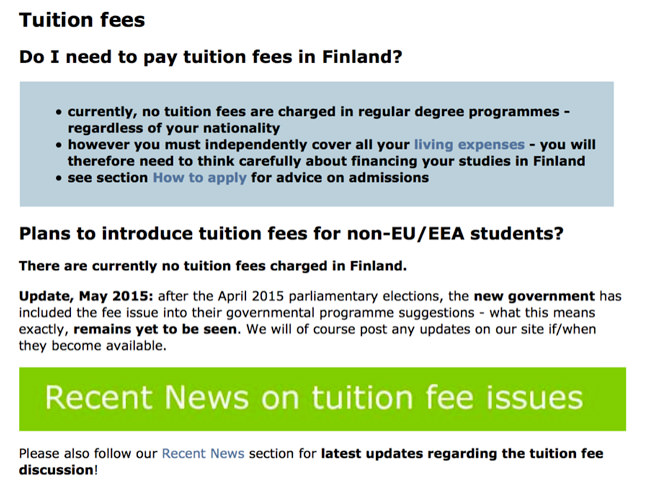 A screen capture from the Study in Finland website, retrieved 19 June 2015

Student groups and faculty associations have protested the proposed tuition fees for as long as they have been debated; that is, for some years now. They argue that it will have negative effects not just for Finnish higher education institutions but also for the country as a whole, since international students spend money benefiting many other sectors during their study time.

The Union of Students in Finnish Universities of Applied Sciences (SAMOK) and the National Union of University Students in Finland (SYL) say they are mystified by the fact that the latest proposal to introduce non-EEA tuition fees was part of an immigration document as opposed to included in the rest of the austerity measures facing the education sector. Joonas Peltonen, chairperson of SAMOK, stated:

“It is cowardly to bring tuition fees up for negotiation separately from other points of educational policy. Even though the work on the government programme seems to have gone smoothly, they shouldn’t be ignoring these kinds of issues so blatantly, especially not in such an important matter.”

Regarding the apparent reversal, Prime Minister Sipilä told the Finnish news broadcaster Yle Uutiset: “I said that education would be reformed and properly. We need to make savings to enable long-term structural reforms.”

And the country’s new education minister, Sanni Grahn-Laasonen, lamented that “education cuts are painful and nobody would have hoped for them … The most important thing is how you make the cuts, so that you achieve as much savings as possible through structural reforms so as to guarantee the quality of teaching and research.”

But it is difficult to see how the cuts can enable such a guarantee. On the website of the University of Helsinki – the only Finnish university ranked among the global Top 100 (according to the Shanghai rankings) – this statement followed the news of the austerity measures: “The cuts pose a serious threat to the quality of research and teaching, and consequently to our national success and competitiveness.” Its rector, Jukka Kola, said of the proposed cuts:

“The steps proposed by the coming government are at odds with its goals. The government wants to make Finland a leading country in education and to increase both the quality and impact of research. The drastic cuts proposed to education would have the complete opposite effect.”

University World News reports that the university has already had to cut 500 employees through retirement and reducing hiring for new positions due to the previous round of cuts, and that even greater challenges lie ahead:

“By 2020, the university will face cuts amounting to €100 million, with €13 million of that due to decisions made by the previous government but taking effect in 2016. This will mean a cut in the university’s basic funding by one sixth.”

A climate of worry

All these austerity measures come during a time when Finns are understandably worried about their economy, which is being lumped alongside Greece’s and Spain’s in terms of its poor performance of late. A recent survey by Yle Uutiset, found that the majority of Finns (54%) are concerned about a “drawn-out economic depression,” and that this fear by far outpaced other concerns such as “problems in domestic politics (28%), problems in foreign politics (22%), threat of terrorism (20%), influx of refugees (16%), and extreme weather (15%).”

Earlier this year, Yle Uutiset reported on research showing that “foreign students may be significantly more expensive than Finnish ones.” With an economy in recession as well as evidence that Finnish students are having trouble finding jobs after graduating, it is possible that popular support may strengthen for the government’s plan to introduce tuition fees for non-EEA students.

Whether or not this occurs, it seems certain that Finnish universities are in for a challenging set of years trying to manage the best of the cuts they have been handed. Mr Kola notes:

“The proposed cuts are so major that universities cannot survive them just by shaving off costs. Hard decisions will have to be made. However, structural changes take time and cannot be implemented in the schedule necessitated by the cuts. The structural changes will have to be made based on a quality assessment of the universities. But the cuts should be targeted so that they do not erode our future.”

This entry was posted in Europe, Finland, Higher Education, Most Popular, Regions.