Malta’s English Language Teaching (ELT) sector has recorded a healthy increase in student numbers and student weeks for 2014. A new study commissioned by FELTOM (Federation of English Language Teaching Organisations Malta), 2014 FELTOM ELT industry survey report by Deloitte, shows that the number of foreign students studying English in Malta grew by 2,558 over 2013. This represents a 3.4% increase in student arrivals year-over-year, from 74,992 students in 2013 to 77,550 in 2014.

The FELTOM report indicates a healthy sector that is contributing substantially to Malta’s tourism economy, and it makes a case for government and other stakeholders to support the sector more comprehensively for still greater benefits.

According to a recent study from the International Association of Language Centres (IALC), Malta is the world’s seventh most-popular destination for students wishing to study English.

Even amid the 2013 decline, however, data from Malta’s National Statistics Office (NSO) showed that student weeks were on the rise. The latest FELTOM report indicates that this trend continued into 2014, with a 1.8% increase in the average length of stay for foreign students in Malta and a 5% increase in student weeks. Official statistics show an increase from a total of 233,834 weeks booked in 2013 to 245,587 weeks in 2014. 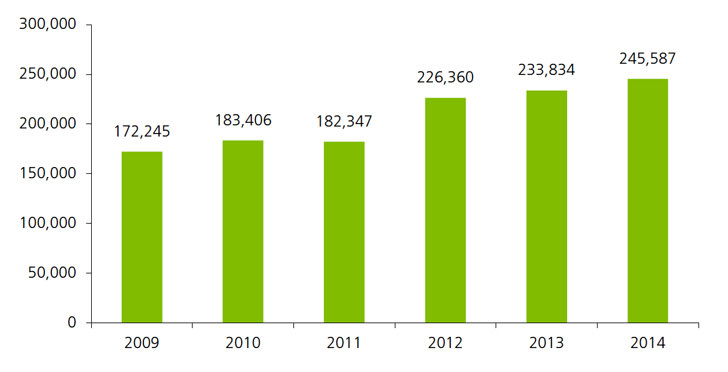 The ELT sector’s contribution to Malta’s overall tourism economy is significant: in 2014 ELT students accounted for 12.7% of total tourist bed nights in Malta, peaking in February and March and also in the busy summer period.

ELT students stay in Malta on average for 22.2 days, which the FELTOM report notes is “almost three times longer than the average tourist based on general tourism statistics.” In fact, the 2014 average stay represents a slight increase over the 2013 average and extends a longer-term trend of modest year-over-year growth in length of stay. 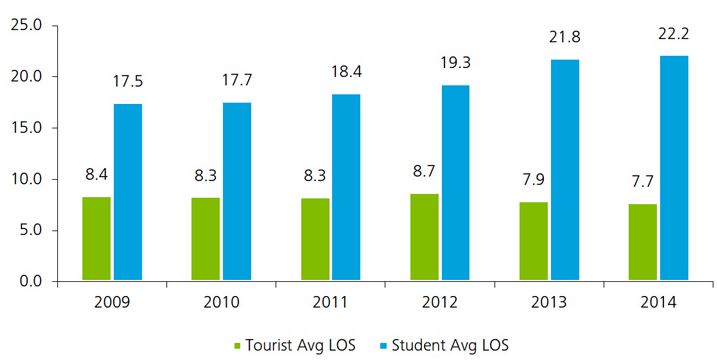 While the news that students are staying for longer periods of time in Malta is positive, it is a trend that is often accompanied by discounted prices for longer bookings. This appears to be a contributing factor for another finding in the 2014 report: total revenue per student week decreased by 0.6% among the 20 FELTOM member schools. FELTOM comments that the decrease might be linked to the increasing number of Italian students as well as given the price sensitivity of the Italian market.

In addition, operating costs went up in 2014, leading to an overall situation in which total gross operating profit per student week decreased (-8.9%) in 2014 compared to 2013. A downward pressure on profits was increased payroll costs in 2014: teaching costs per student week increased by 4.8%. The report notes, “This could be indicative of increased teacher rates as well as lower average numbers of students per class.”

A notable increase came from Libya, which composed a 10% share of overall student weeks in 2014, up from 7% in 2013. The report notes that the growth from Libya was cut short in the third quarter of 2014 as a result of the civil unrest that began in Libya at that time.

Germany (9%) and France (7%) remained stable in 2014 in terms of student weeks booked. Spain slipped from a 7% share in 2013 to 5% in 2014, and Turkey and South Korea also registered declines. Meanwhile, there was growth from Japan, Brazil, and Colombia.

These year-over-year shifts are summarised in the following table of leading source countries (by student weeks booked). 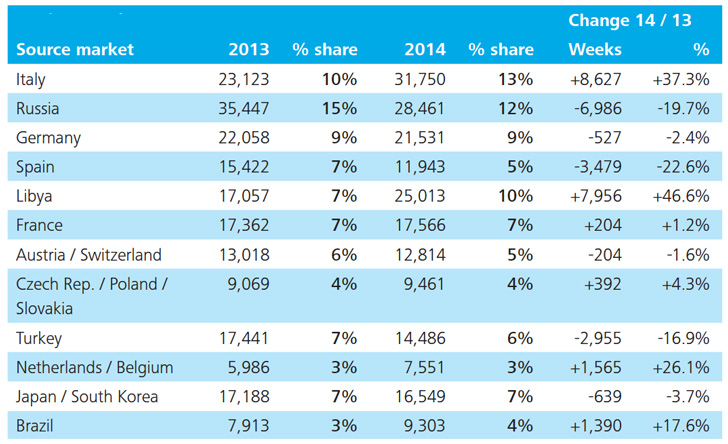 The prospects for further growth

Sue Falzon, ELT Senior Manager with Malta’s Ministry for Education and Employment (MEDE), says that the new growth in Malta’s ELT sector solidifies the country’s status as a key destination for students all over the world looking for English language training:

“This growth proves the effectiveness of Malta’s strategy to ensure sustainable growth in this sector and confirms Malta’s reputation as a global centre of excellence in English language teaching. The EFL Monitoring Board, which forms part of the MEDE in Malta, in close collaboration with MTA, FELTOM, EFL Schools and all industry stakeholders, is committed to further consolidate its efforts to maintain and improve the quality and standards of teaching in Malta.”

FELTOM’s CEO, Genevieve Abela, presented the report to stakeholders and media in Malta recently and took the chance to underline that the sector’s increasing contribution to the Maltese economy warrants “more support from all those stakeholders, especially government, who can help this industry achieve even better results.”

The FELTOM report identifies several specific supports that would improve the competitiveness of the sector relative to other leading destinations for English language study:

“This support could come first and foremost in the form of commissioning this very much needed market competitiveness analysis from which even the tourist industry at large is bound to benefit. Another opportunity would be to foster a better and more effective collaboration between the ELT sector and university through pathway programmes that could attract students from large potential markets. Other forms of support would be better cooperation when it comes to visas by expediting applications for FELTOM members, and more advantageous routes and offers from our national airline, Air Malta.

Increased support and a firm commitment from all those who can boost this sector’s competitive potential will put us on a higher playing field that would benefit, not only all our member teaching schools, but would give greater visibility to Malta as a destination in favour of the economy at large.”