Where the devices are: New study updates global stats on Internet usage

People in developing and emerging economies who are young and educated are much more likely to be Internet users. Ditto for those who speak a little English: regardless of age or education, they are more likely to be regular web surfers.

These are some of the findings of the Pew Research Center’s 2014 Global Attitudes study. The study updates a similar effort from 2013, which highlighted the strong levels of web usage and engagement for social and mobile users. The findings for the 2014 edition are drawn from in-person interviews with 36,619 people across 32 emerging and developing countries conducted from March 17 to June 5, 2014. The results for those 32 countries – including significant education markets such as China, India, Nigeria, Indonesia, Thailand, Vietnam, Brazil, and Mexico – have been benchmarked against a related Pew Center telephone survey of 1,002 Americans, also conducted in 2014.

The study’s high-level findings provide a compact overview of Internet access in developing and emerging economies, along with important insights as to how people access and use the Internet in each country.

For example, the following graphic illustrates the percentage of the population in each country who access the Internet at least occasionally or own a smartphone (as smartphone users, practically speaking, are also Internet users). 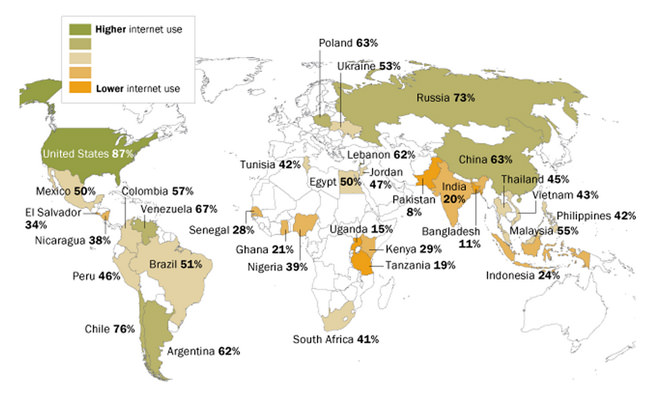 Those who access the Internet at least occasionally or own a smartphone within the 32 countries in the 2014 Global Attitudes study. Source: Pew Research Center

Do some of those numbers look lower than you would expect? If so, it is probably because you spend a lot of time talking to students. The Pew study points out that Internet usage is highly concentrated within younger demographics in developing and emerging economies, particularly among those with a high school education or higher and particularly among those who can speak or read English.

The following table summarises the variances in Internet usage for these factors, and, as you will see, they are quite striking in some cases. (Please note that some table cells are left empty for some countries due to insufficient sample size for the characteristic in question.) 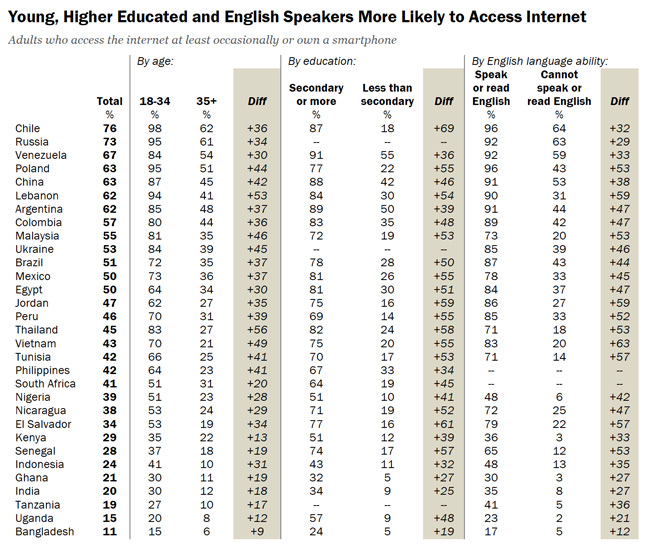 Internet usage by age, education, and English ability among the 32 countries in the 2014 Global Attitudes study. Source: Pew Research Center

These findings make intuitive sense in that the 18-to-34-year-old demographic came of age during a period of dramatic technological change, including the emergence of the Internet and the widespread adoption of mobile devices. In addition to these factors, and, as was the case in last year’s global survey, the 2014 study also finds a close correlation between Internet usage and income. Simply put, “Richer countries in terms of gross domestic product per capita have more Internet users among the adult population compared with poorer nations.”

Also echoing last year’s study, Pew finds that Internet users in developing and emerging economies are highly engaged socially. Staying in touch with friends and family and engagement with social media remain the leading ways in which they like to use the Internet.

This point reinforces an important aspect of communicating with secondary school and college-age Internet users: they are highly engaged socially and those social channels in turn are an important source of information and product or service recommendations. A recent post from NewBrand Analytics makes the point concisely:

“A study of millennials [that is, those born between 1980 and 2000] states that 95% of respondents say friends are their most credible source for information when making a purchase. Additionally, 98% are more likely to engage with posts by friends about a brand versus a post by the brand itself. Therefore, an effective method to get millennials loyal to your brand is to get other millennials talking online.”

Following on from the importance of this highly socialised exchange, Pew also finds that searching for more practical news and information is the next major category of Internet usage in developing and emerging economies. “For Internet users in emerging and developing nations, social relationships are a fundamental aspect of their interaction with the virtual world,” says the study. “Getting various types of information, such as political news, health information and government services, is the next tier of Internet use.”

What’s in your pocket?

The Pew report also has some important observations in terms of how users in developing and emerging economies access the Internet. It tracks usage and ownership of desktop computers from country to country but also smartphone and cell phone penetration as well.

The report notes, “Overall, a median of 38% across the 32 nations surveyed say they have a working computer in their household. In 11 countries, half or more own computers, including 78% in Russia – comparable to the 80% of Americans who say they have a computer in their household. Computer ownership is relatively high in a number of Latin American nations. Majorities in Chile (72%), Venezuela (61%), Argentina (58%) and Brazil (55%) have computers in their homes. Computer ownership rates are lowest in sub-Saharan African nations.”

The extent to which users in each country have reliable access to computers outside the home (e.g., at school or at work) is less clear. Leaving this aspect aside for a moment, we can see that computer ownership broadly correlates to national income levels and explains at least part of the relationship between Internet usage and income that we noted earlier.

Along that same line, cell phone ownership is much more common in the emerging and developing countries in the Pew survey. A median of 84% (across all 32 countries) own a cell phone of some kind. This compares to the US benchmark of 90% for cell phone ownership, and the survey finds a marked difference still between the penetration of more basic cell phones as opposed to smartphones. “Smartphones – and the mobile access to the Internet that they make possible in some locations – are not nearly as common as conventional cell phones. A median of only 24% say they own a cell phone that can access the Internet and applications.”

Percentage of 2014 Global Attitude respondents who own a smartphone or cell phone. Source: Pew Research Center

However, phone ownership again underscores the relationship between age and Internet usage. As with the broader correlation the study observes between these factors, smartphone ownership is also highly concentrated among younger users. “Young people (those under 35) are significantly more likely than their older counterparts to own an iPhone, BlackBerry, Android or other Internet-capable mobile phone,” says Pew.

Overall, the study makes an important point that broader statistics of Internet penetration and usage in developing and emerging economies have to be interpreted via some important filters, including age, education, English ability, and income. In an international education context, the high school and college-age prospects that educators and agents are mainly trying to reach are among the heaviest users of web and mobile technologies. In this sense, the findings of the 2014 Pew study will only reinforce the importance of the Internet, and the social and mobile web in particular, as a key channel for reaching and engaging prospective students.