Strategies for a challenging year in Russia

Russia has been an important growth market for outbound in recent years, both for travel generally and for student travel in particular. The ITB World Travel Trends Report notes that foreign trips taken by Russians more than doubled between 2005 and 2013, increasing by nearly 120% to reach 31.5 million trips in 2013. Russian students booked 276,158 weeks in English language programmes in 2013. In that same year, 51,171 students enrolled in higher education abroad, representing a 68% increase in international tertiary enrolment between 2002 and 2012.

That growth trend, however, has hit some significant hurdles over the last two years. The Russian economy began to stutter in 2013 due to falling demand for commodities and softening world oil prices. It took a harder hit still in 2014 as international sanctions, combined with rising inflation and further declines in oil prices, took hold.

As we reported in late-2014, the rapid devaluation of the rouble over last year was the most immediate and visible sign of these economic pressures: “Russia is in the midst of a currency crisis. The rouble has lost half its value year-to-date, falling from 32.65 per US$1 on 6 January to 59.60 as of 19 December. To put that in even starker terms, it now takes nearly twice as many roubles to buy a US dollar as it did at the start of the year.” 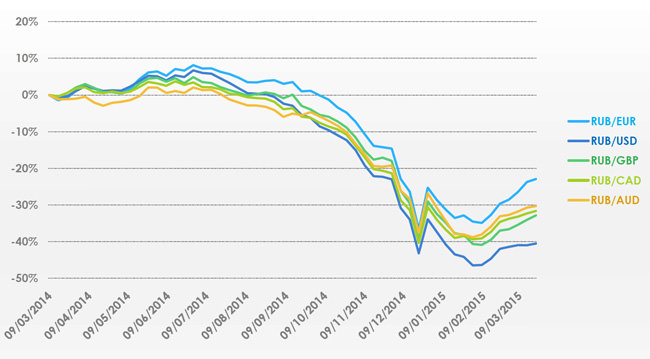 In other words, it became considerably more expensive for Russians to travel and study abroad over the course of 2014.

We would normally expect to see a drop in enrolment under such conditions, and early reports coming out of Russia suggest that has indeed been the case for some markets. We had a chance to survey a number of educators during a recent visit to Moscow and are pleased to present some highlights from those conversations, along with additional research, in our report below.

University World News reports the number of Russian students applying to study abroad fell by 25-30% in 2014. It appears, however, that language study – including group programmes and short-term studies – have been hit hardest with estimates of a 40-50% decline in bookings for the year.

Further declines are expected in 2015, albeit nowhere near as dramatic as what has been reported thus far for 2014. Particularly with respect to those students in longer-term higher education programmes, the situation may unfold more slowly. Those students are heavily invested in longer-term programmes abroad. Their studies may be supported to some extent by scholarships or other awards, and academic credits earned abroad are not easily transferred back to universities in Russia.

However, the longer the rouble remains devalued against foreign currencies, the more difficult it will be for some of those tertiary students to continue their studies outside of Russia.

The Russian Ministry of Education and Science has suggested recently that “many” are considering leaving their universities abroad. The ministry has recently halved the number of scholarship places in its Global Education Programme (from 1,500 per year to 750). However, the move appears to have been made to offset the higher costs arising from changing currency values rather than a bid to reduce programme costs for the government. The smaller field of funded students will each now receive more than double the grant that was previously offered (2.7 million roubles per student rather than 1.3 million).

University World News has also reported that the Russian government has drafted legislative amendments to ease the transfer of Russian students from institutions abroad, and to allow them to more readily continue their studies at domestic universities.

Such factors, along with how the rouble performs over 2015, could play a big part in determining Russian demand for education abroad this year.

For the moment, it remains to be seen whether Russian enrolment in longer-term studies abroad (e.g., at the secondary or post-secondary level) will follow the trend observed for language studies over the last year or whether such programmes will be more resistant to downward pressure on demand.

Price will be key

One thing seems reasonably clear: price is going to play a big part in shaping demand in 2015.

We can expect that more educators will introduce special discounts or other price incentives for Russian students this year, and that students will more actively explore alternate, more affordable study destinations as well.

That certainly seems to be the case in the travel industry. The ITB World Travel Trends Report quotes Dmitriy Tichshenko, Director of Strategic Development at PREKO Consulting in Russia, who says, “Russians are still looking to travel. More expensive destinations will perhaps be the losers next year and more Russians will go to cheaper destinations.”

IPK International President Rolf Freitag agreed, adding, “Russian consumers still want to travel. The battle for the Russian market will be won or lost on price next year.”

In his presentation at ICEF Moscow last month, StudentMarketing CEO Samuel Vetrak offered a similar outlook for student travel. In his analysis, price is now a greater factor in decision-making for Russian students and their families – and therefore discounts, special offers, and scholarships weigh more heavily as well – and prospective students are more open to less expensive study destinations.

We recently had the opportunity to check in with a number of educators during ICEF Moscow for their views of the marketplace. There was a general consensus among those from leading study destinations – the US and UK in particular – that Russian student numbers were down in 2014.

“This year we definitely saw a drop in Russian bookings,” said Elizaveta Evans of the US-based language school FLS International. “We are trying to adapt of course. We are investing in supporting our partners as much as we can. We are also offering some discounts. Hopefully, the situation will stabilise and it will be much better in the end.”

Other reports, however, suggest that more affordable destinations have not observed much of a drop off in student numbers as yet. Jaruwat Kiatiwongse of Bangkok University International College (BUIC) in Thailand added, “We’ve been monitoring the number of international students, and so far we continue to receive a consistent number of students from Russia. [Our university] offers a very affordable tuition fee and cost of living for Russian students, and the rouble-to-baht conversion rate is still quite reasonable. Also, many students like to stay after their studies to explore business and career opportunities.”

Andrew Fisher is the Managing Director of UK-based OSCARS International and he underscored the importance of value in his remarks: “Parents need to know that if they are spending the money, that their children are going to get good value from it, learn a lot, and come back having had a very, very positive experience.”

Mr Fisher elaborates on these points in our two video excerpts below. In the first, he outlines some strategies for establishing and reinforcing value for students, families, and agents in a down market, including flexibility around discounts and commissions.

He also makes the important point that a downturn in a market is not a time to withdraw – rather, it is an opportunity to invest further for the long term and even to diversify and expand into regional markets. “Russians are a very loyal people,” he notes. “And they will remember those that stuck by them during a difficult time.”

In our second and final video excerpt below, Mr Fisher emphasises the importance of differentiating programmes and services, both as a way of reinforcing the value proposition for study abroad and for establishing a stronger competitive position in the market.

He also expands on the key role that agents play in the Russian market. “The relationship with the agent is absolutely critical,” he says. “Our philosophy is to go out and work through the agents.”

To say the least, the commitment and optimism of these educators is impressive. But so too is the expansion of the Russian market over the past decade, and its prospects for continued growth in the future. It remains an emerging education market for a growing field of destinations and aims to be a bigger player in international mobility – both inbound and outbound – in the years ahead.

When the rouble strengthens again, the country and its students will be better placed to realise that ambition, and the working relationships that are being forged today will no doubt play a key role in the market’s continuing development.