A recent UK report found that about a third of all international undergraduate students in England transferred from programmes delivered offshore. Another Canadian survey notes that the number of institutions offering programmes in collaboration with international partners has nearly doubled since 2006. And Australian institutions currently offer more than 800 programmes offshore, for the most part in Malaysia, China, Singapore, and Hong Kong.

The findings in each case suggest that higher education institutions in major host countries around the world are continuing to rapidly expand their partnerships with institutions abroad. They further suggest that such linkages are becoming an increasingly important recruitment channel for the host institutions.

This pattern is reflected as well in another late-2014 report from the American Council on Education (ACE): Mapping international joint and dual degrees: US program profiles and perspectives. The report gathers together survey responses from 134 American universities and colleges, as well as findings from more selective follow-up interviews conducted by email and telephone.

Respondents to the ACE study characterised joint degree programmes as more challenging to implement and administer than dual degrees, largely due to issues around mapping course equivalencies and articulating curricula.

For example, ACE quotes Dania Brandford-Calvo, director of the Global Education Office at the University of Rhode Island, who notes that while joint degrees are “exciting once they get off the ground,” they often entail years of preparation, an extensive amount of work, and numerous stumbling blocks.

“Ms Brandford-Calvo noted the entire relevant curriculum must be reviewed on each side, along with thesis requirements and other programme details. It is necessary to find mutual agreement on how much credit to award for particular coursework, as it may vary between the partners. And, she added, many of the stumbling blocks in the process are country- and context-specific (e.g., regulations set by a national board of education) so they are unique to each programme and cannot be anticipated ahead of time.

Dual degrees, in contrast, typically are somewhat less complicated. While issues of course equivalencies and programme requirements must still be resolved, Ms Brandford-Calvo observed that there is often ‘more flexibility’ in these areas than for joint degrees. A number of participants also noted that as long as students fulfill their (US) institution’s degree requirements, it is up to the partner institution to determine and enforce its own requirements; the two degrees truly are separate, and granted independently by each institution.”

This perhaps explains the prevalence of dual degree programmes within the ACE survey: of the programmes reported in detail by survey respondents, 78% were dual degrees and 22% joint programmes.

A snapshot of US programmes offshore

Of the 134 respondents to the ACE survey, 89 provided detailed information on 193 joint and dual degree programmes currently operating offshore. China was the number one location by far, accounting for 37% of the programmes reported in the study. France was the second most-common programme location, followed by Turkey, Germany, and South Korea.

“The prominence of these five countries is broadly consistent with student mobility patterns for US institutions,” the report notes. “China, South Korea, and Turkey are among the top ten sending countries for students coming to the United States, while France and Germany are among the top study abroad destinations for US students.”

Undergraduate programmes accounted for nearly half of the offshore linkages reported in the study (48%), with the balance composed of 39% graduate degrees, 11% doctoral programmes, and 2% associate degrees.

As the following chart reflects, business programmes are the most popular of the joint or dual degrees reported, followed by the sciences. 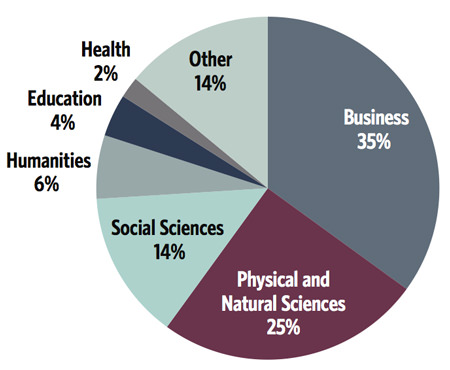 Area of study for programmes reported in the ACE survey, 2014

Accreditation for programmes reported in the ACE survey, 2014

In terms of timing, most respondents (70%) indicated a timeframe of up to three years for programme development and launch, with an average time requirement of roughly two years. Specific start dates were provided for 61 of the 193 programmes reported in the survey and of those nearly half were launched within the last five years.

This suggests an increase in institutional linking activity in the US, in this case particularly with respect to joint and dual degree programmes, that is in keeping with similar expansions of partnering activity we have observed in recent years in Canada, Australia, and the UK.

Launch dates for programmes reported in the ACE survey, 2014

Regardless of launch timing, it seems clear that enrolment is a major factor in sustaining these international programmes. Ultimately the success of the programme, and the willingness of both partners to support it, is heavily dependent on whether or not the programme meets the expectations of each partner with respect to enrolment.

A majority (63%) of programmes reported in the survey enroll only non-US students, while the remaining third accommodate a mix of US and foreign students.

One respondent noted that collaborative degree programmes are attractive in terms of recruiting abroad because they are ‘controlled,’ and students have essentially already been vetted through the partner institution’s admission process.”

In keeping with this finding, half of the survey respondents indicated that technology plays a part in the delivery of joint or dual degree programmes offshore. However, a larger majority (84%) indicated requirements for international travel or exchange – that is, for students to complete some of the programme requirements at the US host institution.

ACE adds, “Mobility configurations vary considerably; a number of respondents characterised their programmes as ‘plus’ models, (e.g., 2+2, 3+1, 1+2+1, and in one case, 1+1+1+1), which entail undergraduate students rotating between the two partner institutions on a yearly basis.

Whatever the configuration, however, the high percentage of programmes that require student mobility of some type suggests that even in light of technological advances, in-person cross-cultural interaction is still a primary component of joint academic endeavours; it also lends credence to the hypothesis that collaborative degree programmes are indeed considered a tool for bringing international students to campus.”

The clear implication of the ACE survey is that joint and dual programmes generally require a significant institutional commitment on the part of both partners along with a long-term investment of staff time and resources, both for the initial implementation as well as the ongoing operation of international programmes. While the report raises questions about the broader internationalisation impacts of such initiatives, it also clearly points to their growing importance as an efficient and effective recruitment channel for host institutions.