As much as the language travel sector is a key segment of the international education industry, little comparative data on the sector’s performance and trends has been available to date, whether globally or for major destination countries.

To help address this, the Association of Language Travel Organisations (ALTO) commissioned leading consultancy Deloitte to conduct a global survey of language schools and agencies. The survey was administered in 2014 and drew responses from 100 language programme providers representing 304 schools and 64 agents representing 127 agency offices.

The goal of the ALTO-Deloitte Language Travel Industry Survey was to take the “pulse of the language travel industry and produce statistics about business performance and outlook across language schools and education agencies.”

The 2014 survey is to be the first in a series of annual efforts that, over time, will provide valuable benchmarking data for this industry. ALTO and Deloitte note of the data generated by their survey:

“This type of data … helps to create a healthier and more transparent market environment, whilst pointing out weaknesses and areas for improvement. Equally important, it can be used as a tool when lobbying for more optimal regulatory structures and stable visa policies between source and destination countries.”

This ICEF Monitor article will present some of the findings of the survey, and then it will turn to highlights from a special report from the December 2014 issue of Study Travel Magazine (STM) which looks at recent trends for the eight leading destination markets for English language study.

The ALTO-Deloitte schools and their use of agents for bookings

The 304 schools represented in the ALTO-Deloitte Language Travel Industry Survey spread out across the world but – with significant representation in the UK, US, and Canada – have combined net revenues of US$507.8 million. More than half (59%) of respondent schools offer English language courses; 13% offer Spanish; then French (8%), Chinese (6%), German (5%), and then smaller percentages for other languages.

Source markets that featured as very important across the broad mix of schools included Brazil, Spain and Italy.

The survey respondents reported that 85% of their bookings, on a weighted average basis, were generated through agents.

Adults stay the longest to study in language courses

Responses from schools about the average length of time students spend in their language courses provided an average of 5.1 weeks, with adults staying longer (6.1 weeks) than juniors (2.3 weeks).

Across the countries, junior weeks brought in more money than adult weeks (an average of US$616 for junior versus US$316 for adult). The UK posted a very high value (US$923 a week) for its junior courses, which the study report says is likely due to a number of schools offering premium junior courses within the UK sample.

Growth reported across the board

Australian schools reported the biggest growth in student weeks (24%), well ahead of the US, Canada, and South Africa (each at 16%). Australian respondents also saw their revenues jump nicely from 2013 to 2014 (21% growth), as did South Africa (20%) and Canada (19%). Less buoyant, though still experiencing growth, were British schools (11% up for student weeks, 9% up for revenues). 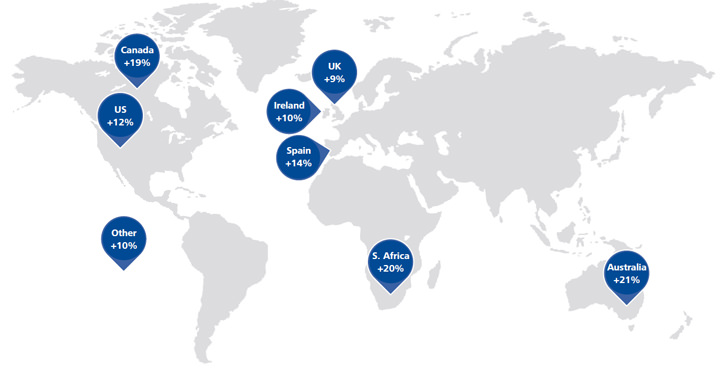 When schools were asked about particular issues that have affected their business over the last 12 months, 81% said that economic issues in source countries had had a negative impact. Nearly three-quarters (72%) reported that visa policies in their own country had been a problem for their business.

We have reported frequently on the effect of visa policies on international education sectors around the world. It is not surprising then to see Australia enjoying recent growth in both student weeks and revenue given recent changes to its visa system that have been more inclusive of language schools.

Agent-respondents to the ALTO-Deloitte survey reported that adult courses compose more of their business mix than junior courses do (65% adult versus 35% junior for student weeks, and 71% adult versus 29% junior for commission revenue).

The UK emerged as the top place into which responding agents were booking junior students in 2014, followed by the US, Canada, Ireland, France, and Germany.

The mix is slightly different for adult courses, with the UK still top for this but France second this time. The US comes in third, then Canada, then Australia.

Roughly as many agents said their junior weeks placements had increased (31%) in 2014 over 2013 as said they had decreased (29%), with 40% saying they had remained the same. There was slightly more growth reported for adult weeks placements: 38% increase, 27% decrease, and 35% no change. Overall, junior weeks revenues did not move up from 2013 for agents, while adult weeks went up by a modest 1.7%.

A closer look at English-speaking destinations

Aside from this being the first year of the ALTO-Deloitte survey, an important caveat that accompanies its findings is that they are based on a self-selecting sample of school and agent respondents. The survey is a valuable new contribution to the available data for the global language travel industry but its results necessarily reflect the make-up of the respondents, both in terms of nationality and mix of business.

In that sense, a recent item in Study Travel Magazine represents both a complement and a contrast to the inaugural ALTO-Deloitte survey in providing an overview of recent-year trends in the world’s eight leading destinations for English language study. STM drew on national-level data surveys for its findings of recent industry trends over 2012 and 2013. Like ALTO-Deloitte, it finds some important indicators of growth, albeit at a more modest pace, and provides some broad comparative values for the world’s major study destinations.

STM estimates the value of the English language teaching market across the eight leading destinations – the US, UK, Australia, Canada, Ireland, New Zealand, Malta, and South Africa – at just over US$11.7 billion. America and the United Kingdom hold the lion’s share of this revenue base, more or less splitting two-thirds of the market between them, followed by Australia and Canada, at 15.5% and 13.5% respectively. The individual market shares of the remaining destinations in the top eight fall off rather sharply from there, ranging from 4.6% for Ireland to 0.6% for eighth-place South Africa. 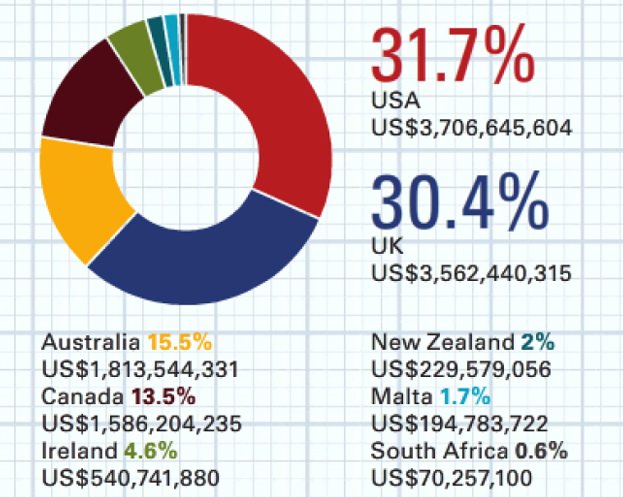 Australia and Canada were the big gainers among the top four destinations, with revenue growth of 36% and 12% respectively.

In contrast, both the UK and the US saw revenue fall off from 2012 to 2013, with Britain registering a 1% decline and a 2% drop for the United States. “The [US] is currently experiencing mixed fortunes in its IEP sector with declining student numbers from traditional source countries such as Korea and Taiwan, offset by large increases in students from China and Saudi Arabia,” notes STM. “The picture in the UK appears to [again] be one of mixed experiences as traditional markets such as Spain and Italy experienced a decline in numbers while other [markets] posted strong growth.”

Canada’s revenue growth (as measured in US$-equivalent values) may have been due in part to the continued strength of the Canadian dollar relative to the US currency over 2012 and 2013. That currency effect, along with any price inflation in the market over those two years, effectively masks a real decline in enrolment in Canadian language programmes: student numbers were down by 9% from 2012 to 2013 and total student weeks were virtually flat, registering a 1% decline. A spokesperson for Languages Canada, the peak industry body in the country, attributed the decline to “a combination of a strike by foreign service visa officers affecting the processing of visas at the height of the summer and changes to student visa regulations [that] led to uncertainty in the international market.”

In Australia, meanwhile, Sue Blundell of English Australia attributes the country’s strengthening revenue base to enrolment growth in academic preparation programmes. “This is being driven by post study work rights and streamlined visa processing for universities and packaged English programmes,” she adds. “The growth is experienced primarily by university language centres and not to the same extent by private providers.”

As with the ALTO-Deloitte survey, STM’s work in compiling and comparing details of market share, growth, relative pricing, and other trends is an important contribution to our overall understanding of the global marketplace. The real value of both the ALTO-Deloitte and STM benchmarks will be in continuing to compile similar data in the years ahead and in using that as a basis for charting longer-terms trends in language travel, both for the global market and for major study destinations.