A new report from Universities UK underlines the positive impacts that international students have on the UK’s economy and society, and warns that government policy is impacting the country’s competitiveness as a leading global study destination. It also shows that the composition of the international student body in the UK is changing over time; in particular, that South Asia is contributing fewer students and East Asia is sending more.

Universities UK emphasises that the UK’s status as a leading study destination is currently under pressure due to the following combination of trends:

“For the UK, a return to sustained growth in international student recruitment is not a certainty in the current climate,” says the report.

“With a spotlight remaining on the wider issue of immigration in public discourse, and with students constituting the largest portion of non-EU immigration, higher education institutions remain implicated within the government’s drive to reduce net migration to the ‘tens of thousands’.

This, coupled with certain policy changes making the UK less competitive in attracting international students, and an absence of a formal government commitment to grow student numbers, has led to the UK recently experiencing stagnation in an industry where it traditionally excels.”

Recent losses for the UK in international student enrolments

Perhaps the best place to begin in order to contextualise the Universities UK report is with HESA statistics. First, we should understand that non-EU students composed roughly 13% of the total UK student population in 2012/13, up from 10% five years earlier.

This is a small drop, but it represents a major reversal from the steady and sometimes very significant increases up to that point. As for EU students studying in the UK, there’s been a decline of over 5% (132,550 to 125,290). 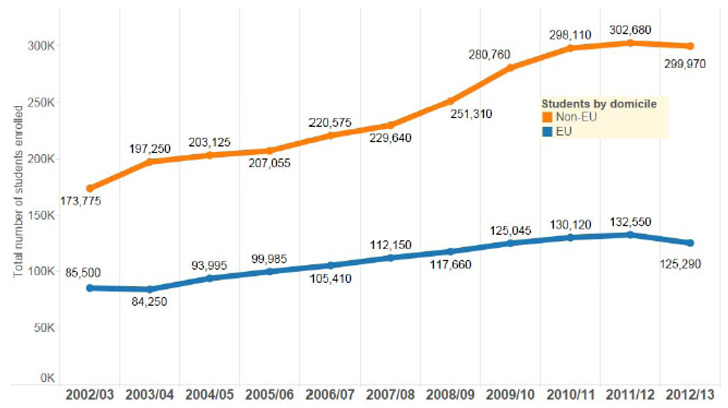 Trends in non-EU and EU student enrolment in the UK, higher education institutions only. Source: HESA

The story of China and India

Together, China and India constitute the greatest proportion of non-EU international students in the UK, and their combined proportion grew from 36% in 2008/09 to 40% in 2012/13. However, while Chinese enrolments have increased over this period, Indian enrolments have been falling. 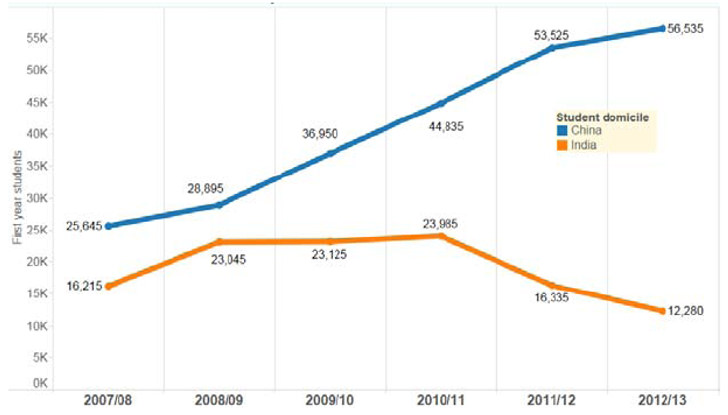 First year enrolments of students from China and India in the UK, 2007-2013. Source: HESA

There is also a broader regional trend emerging, with more enrolment coming from East Asia than from South Asia. 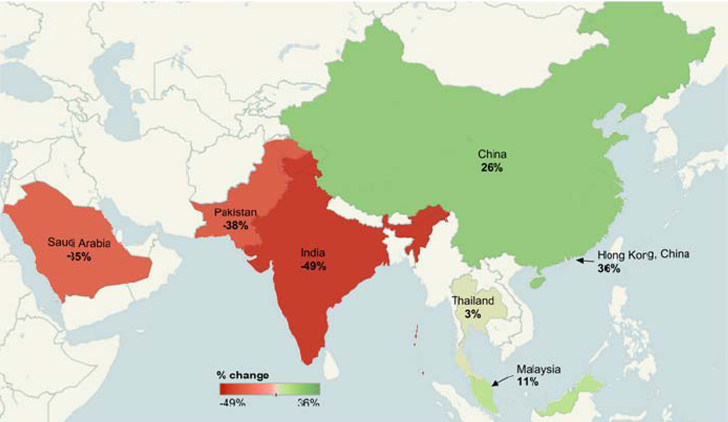 This is significant because many graduate courses in the UK are subsidised by tuition fees from international students. A similar phenomenon exists for STEM subjects, and international entrants to these courses have fallen by 10% in two years.

If international enrolments in STEM areas continue to fall, they could make certain STEM courses/programmes unviable and thus unavailable for domestic students as well.

The HESA data for 2013/14 is not yet available; in the meantime Universities UK surveyed 104 member institutions in spring 2014 to get a sense of trends in the 2013/14 academic year. Overall, members were more likely to report growth in international student commencements than declines, and said that China, Malaysia, and Hong Kong are driving the growth, with applications also increasing from prospective Saudi Arabian, Brazilian, and American students.

But the survey also revealed a continuing trend of declines from India and Pakistan. 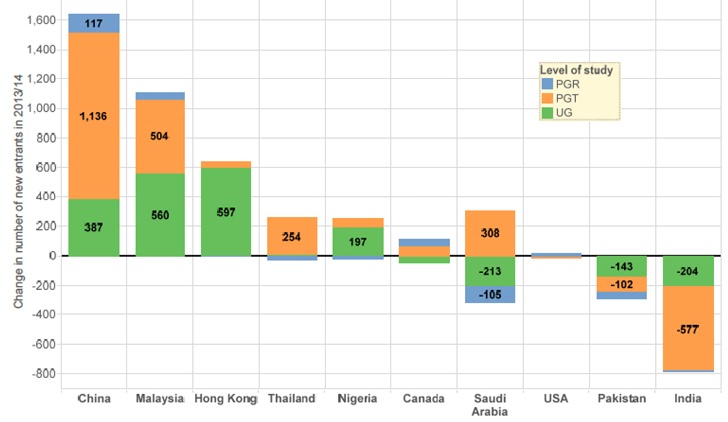 Change in number of new entrants in 2013/14 compared to 2012/13, by student’s country of origin and level of study. Source: Universities UK survey

The Universities UK report then contrasts the India/Pakistan drops to Indian/Pakistani enrolment trends in competitor countries:

More broadly, the report notes that among the major destination markets of the UK, the US, Canada, and Australia, the UK was the only one to experience a decline in international entrants in 2013/14. 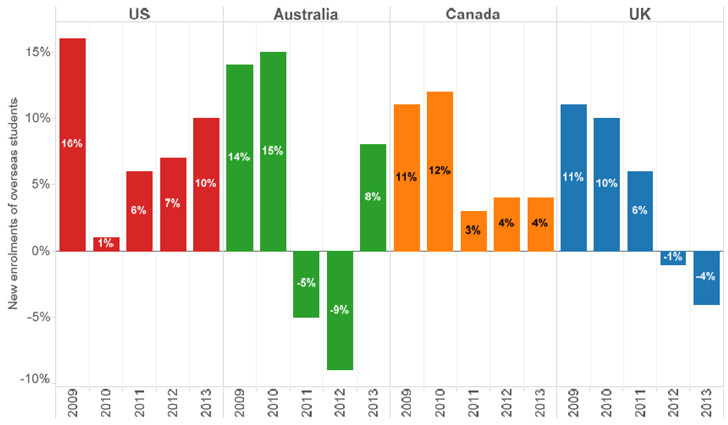 Year-on-year change in the number of foreign student entrants in the UK and its competitors. Sources: Institute of International Education, Australian Education International, Citizenship and Immigration Canada, HESA

While the report sets out a number of measures in which the UK continues to be an attractive study destination for international students – for example, quality of experience, welcoming institutions, quality of education – it highlights findings from a number of studies showing areas where its reputation is suffering. For example:

“A 2013 survey carried out by IDP Education of 1,100 students across Asia and the Middle East showed that, when it comes to the perceived quality of education, the UK is second only to the United States across the five main English-speaking destinations, with Australia and Canada close behind, and New Zealand fifth.

However, the UK was rated as the worst destination in terms of perceived graduate employment opportunities, and fourth in terms of student visa requirements/policies.”

The report also cites the ICEF i-graduate Agent Barometer study, which shows how agents’ perception of the UK as an attractive destination has fallen from 2008 to 2013 – in contrast to Canada’s increasing attractiveness.

Most worrisome perhaps is a 2014 National Union of Students (NUS) survey that showed that more than 50% of current international students in the UK feel unwelcome, and 19% would not recommend the UK as a study destination to their friends or relatives. This is a particularly worrying finding as other research in the field shows that a country’s attitude toward international students is highly influential in applicants’ choice of study destination.

Post-study work opportunities in the UK are also shown to be less attractive than those in other countries. The report cites a 2013 Ipsos MORI survey that revealed that 91% of Indians considering studying abroad believed the UK’s restrictions on post-graduation work opportunities would put off some or most students. And of those Indians who opted not to go to the UK, 38% said it was because they doubted they would be able to work in the UK post-graduation.

The UK currently commands a 12.6% share of the world’s internationally mobile students, second only to the US.

According to the Universities UK report:

“In 2011/12, the UK higher education sector generated £10.7 billion in export earnings. Around 30% of this value came from overseas student fees …. international students across the UK spent £3.4 billion off-campus in the form of living expenditure, on things like rent, food, entertainment and consumer goods.”

Put another way, the total spending by international students on fees, accommodation, and other consumer expenses in the UK was more than £7 billion (US$11.24 billion) in 2011/12.

What needs to be done

Universities UK considers the British government’s international education strategy to be missing a key element: a firm commitment to and target for international student growth. The association’s report calls for the following from the government:

Commenting on the contents of the report, Universities UK Chief Executive Nicola Dandridge made a point to emphasise the danger of the government’s continuing to lump international students into net migration targets:

“We must do all we can to welcome genuine students who wish to study here. We do not want to lose our leading position as a destination for the increasing numbers of students who want a higher education overseas….

We are in danger of disadvantaging a group of migrants who not only make a substantial contribution to our society and our economy, but also are not the migrants whom the public, including Conservative voters, are concerned about. The current one-size-fits-all approach to immigration does not work and must be changed.”