A report published by UNESCO Institute for Statistics charts strong growth in mobility and demand among higher education students in sub-Saharan Africa, with South Africa emerging as a key regional education hub. The report – New patterns in student mobility in the Southern Africa development community – comes at a time of increased higher education activity and greater collaboration across the continent and draws on data from UNESCO’s Institute for Statistics, the OECD, and Eurostat.

Africa has been attracting more attention from international recruiters of late due in part to major demographic shifts currently underway across the region. A recent article in The Globe and Mail cites Standard Bank figures indicating the African middle class has tripled in size over the past 14 years, growing from 4.6 million households in 2000 to 15 million today in the continent’s 11 largest economies.

The countries in the Standard Bank study – Angola, Ethiopia, Ghana, Kenya, Mozambique, Nigeria, South Sudan, Sudan, Tanzania, Uganda, and Zambia – account for about half of sub-Saharan Africa’s population and GDP, and have seen their economies grow 10-fold since 2000. Standard Bank estimates the number of middle-class households across these 11 economies will nearly triple again, to 40 million families, by 2030. Nigeria – the most populous country in Africa – is itself expected to contain 12 million middle-class households by 2030.

We have reported previously on some of the challenges and opportunities created by a surging population in Africa. Explosive growth, particularly in sub-Saharan Africa, means that by 2050, 2.4 billion people will live in Africa, up from just over one billion today, with Nigeria set to become the world’s third most populous country. Yet Africa is a large, diverse continent with striking cultural, historical, and economic differences from one country to the next. Not surprisingly, significant regional variations also exist in higher education enrolment rates, mobility patterns, and policy priorities.

The UNESCO report explores the current mismatch between supply and demand in higher education across the sub-Saharan region.

Static or diminished government investment, quality concerns, and overcrowding have resulted in many students opting to travel outside their home countries to pursue tertiary education. In 2009, 4.9% of tertiary students in sub-Saharan Africa (rising to 5.8% in SADC countries) were internationally mobile, compared to 2% globally.

While the majority of sub-Saharan students outside the SADC choose traditional study destinations such as France, the United States, the United Kingdom, Germany, or Canada, fully 48% of SADC mobile students choose South Africa for their studies.

The report also found that the majority of mobile tertiary students in the region were pursuing undergraduate opportunities, with social sciences, business, and law the most popular programme choices. 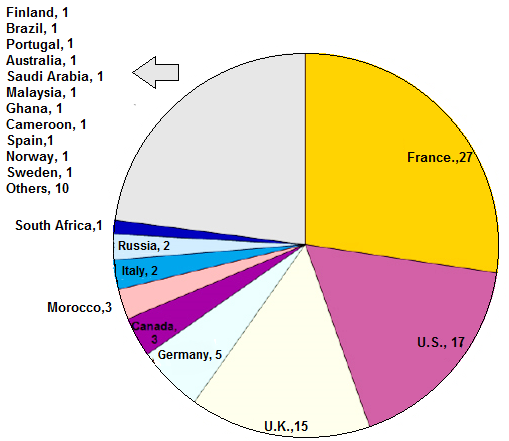 The sub-Saharan region has averaged an enrolment growth rate of 8.4% over the past four decades, nearly double the 4.3% global average. There were nearly 4.8 million higher education students in the region in 2009, a 20-fold increase since 1970.

Despite this rapid growth, the World Bank estimates that this figure represents just a 6% gross enrolment rate (GER) of the total tertiary-aged population (compared with enrolment rates of 13% in South Africa and 72% in North America and Western Europe).

While the growth in overall student numbers has been impressive, the gap in enrolment rates between the sub-Saharan region and other parts in the world is growing, underlining one of the key challenges of keeping up with such dramatic population growth.

Yet steps have been taken to encourage greater participation in higher education within the sub-Saharan region. The 2004 Accra Declaration (an agreement made among the Association of African Universities following a 2004 meeting with UNESCO and the South African Council on Higher Education) re-affirmed the region’s commitment to internationalisation and enhancing access to higher education.

The report notes that a number of programmes aimed at facilitating the mobility of students have been put into place. For example, in 2007 the African Union set up the Mwalimu Nyerere African Union Scholarship Scheme (MNAUSS), designed to enable African students to study at recognised higher education institutions on the continent in areas related to science in technology. In exchange, students who participate in the programme must work in Africa for a minimum of two years following graduation.

Focusing on the SADC region, the UNESCO report highlights a number of emerging patterns in student mobility within SADC countries.

Namibia, for example, has a relatively high GER for tertiary education at 9%. Combined with a high number of outbound tertiary students, the total enrolment rate rises to 12%. Smaller countries such as Lesotho, Swaziland, Seychelles, and Mauritius also record high outbound enrolment rates and higher overall participation rates, with most mobile students in these countries choosing to study in nearby South Africa.

Larger countries such as South Africa and the Demographic Republic of the Congo record lower outbound rates, but maintain high overall participation rates, a situation the report attributes to the availability of opportunities at home. 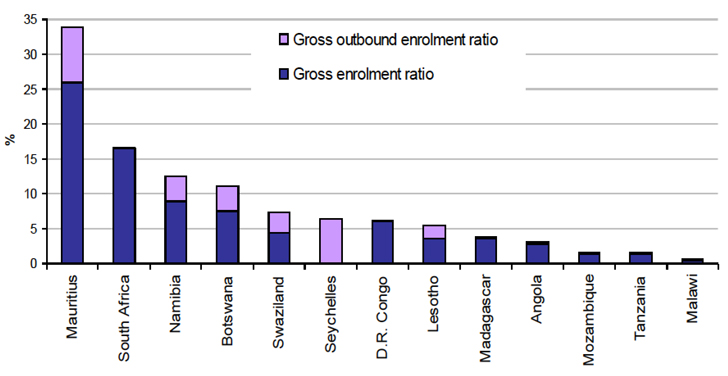 Conversely, the UNESCO report also finds that when local growth in some countries surpasses the growth in outbound enrolment, pressure on the system (in the absence of increased funding) raises concerns of overcrowding, diminished access, and the erosion of quality. One example noted is the Democratic Republic of the Congo, where a decreasing number of mobile students stands in sharp contrast to a strong increase in local enrolment.

With an outbound rate of nearly 6%, students from SADC countries have the highest outbound mobility rate in the world. Reflecting a trend toward intra-regional mobility that has also been observed in other global regions, nearly half of these students choose to stay within the region.

The “dispersion rate” for countries in the SADC (the extent to which students from a given country are concentrated or dispersed over a number of destination countries) varies by country, with students from countries such as Angola, Malawi, Mauritius, Mozambique, the Seychelles, South Africa, Tanzania, and Zambia studying in a larger number of destinations than students from other countries in the region. The report notes that one potential benefit of higher dispersion rates – assuming students return home following their period of study – is the introduction of a broader range of ideas to the home country. 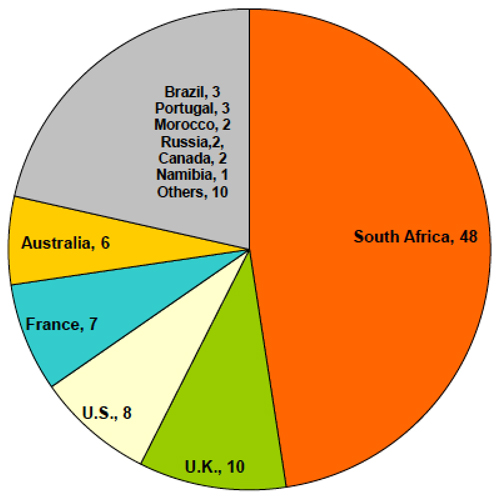 Explosive growth rates make Africa the next “frontier” for internationalisation initiatives, according to a 2013 article in University World News. Higher education providers are responding to opportunities in the region. For example, the article notes, Lancaster University has opened a campus in Accra, Ghana. India has invested in the Pan-African e-Network Project to develop higher education links with several African countries. Limkokwing University, a prominent private university in Malaysia, now has campuses in Botswana, Lesotho, and Swaziland.

Noting that “demand for higher education will grow tremendously over the coming decades as a consequence of massive expansion in access to basic education,” and “West and Central African countries face a particular shortage of human resources and capacity within Science, Technology, Engineering, and Mathematics (STEM) as well as agriculture and health disciplines,” the World Bank announced earlier this year the development of a network of 19 centres of excellence at institutions across the continent. Managed by the Association of African Universities, the initiative has allocated US$150 million for skills development and research and innovation projects located in Nigeria, Ghana, Senegal, Benin, Burkina Faso, Cameroon, and Togo.

Makthar Diop, World Bank Vice-President for Africa, said he was excited to support these pioneering centres because of how they will nurture specialised higher education institutions on the continent. “I can think of no better way to grow African economies, create jobs, and support research in Africa, than educating young graduates with expertise in high-demand areas such as chemical engineering, crop science, and the control of infectious diseases.”

Internationalisation in Africa was also a hot topic at last year’s EAIE conference in Istanbul. A presentation by Christoff Pauw from Stellenbosch University focused on intra-African mobility schemes, highlighting the Mwalimu Nyerere scholarship programme and urging the need for “South-South” solutions to education challenges such as “brain drain” and diminished funding that currently hamper growth in the region. This same presentation also placed a spotlight on the increasing emphasis on distance education initiatives across Africa. A second presentation by Jacob Songsore from the University Ghana outlined the “Periperi U” partnership, an innovative collaboration among ten African universities that aims to build regional capacity to reduce the impact of natural disasters.

University World News also recently reported that an African Virtual University (AVU) has been launched in partnership with the African Development Bank in order to provide African students with expanded access to higher education. The AVU will offer open, distance, and e-learning programmes at 29 learning centres across 21 countries, with centres set up to provide services in English, French, and Portuguese. According to University World News, “It is intended that the new centres will help to tackle the digital divide by helping Africa to overcome geographical, technological, political and financial obstacles that often hinder students’ access to higher education.”

With its booming population and economic growth, a corresponding and continuing rise in the middle class, strong growth in outbound mobility, and dramatic expansion of education at all levels, it seems clear that sub-Saharan Africa will be a key region for international educators for many years to come.