The UN predicts that the world’s population is going to increase to 9.6 billion in 2050 (from 7.2 billion today). Where will most of the growth come from? Africa and India. According to The Economist:

For the moment, the total population of Africa exceeds one billion, representing just over 15% of the world’s total. The following graphic paints a compelling picture of the current composition of the world’s population, how it will change further through 2050, and the increasing share of the global population that Africa will gain during this period. 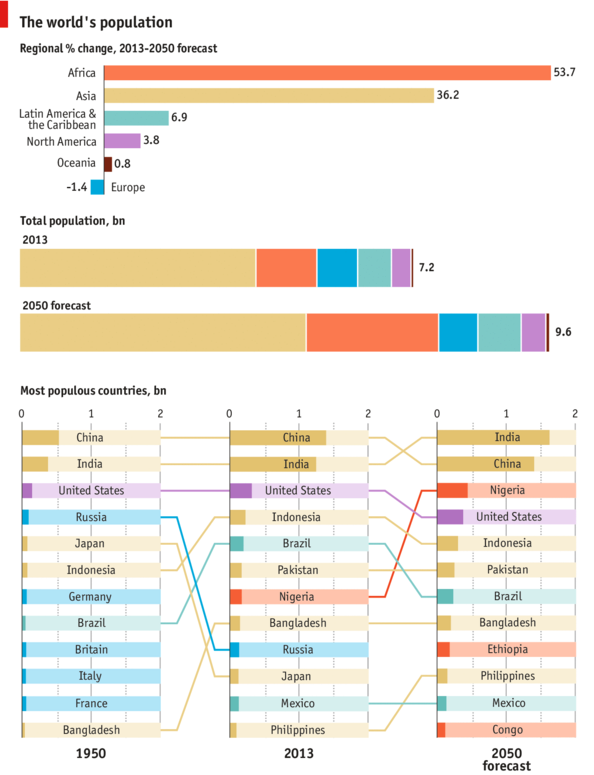 Suffice it to say that Africa’s numbers make it a hotspot to watch in terms of international students. So how many Africans are staying home for their education and how many are studying outside their country? Are those who do elect to study abroad travelling overseas or within the continent?

The French government has released a report that answers just these sorts of questions, La Mobilité des Étudiants d’Afrique Sub-Saharienne et du Maghreb, and it finds that there have been some shifts in the choices of African students studying abroad. For a primer on the Maghreb region, please see here; for one on the Sub-Saharan region of Africa, please see here.

However, South Africa, the #2 destination, has been gaining in market share relative to France since the last time the study was conducted. Its share of 15% of African students represents an increase of 28.8% since 2006, versus France’s decrease of 1% in that time.

“Advantages include less bureaucracy to obtain a visa than for European and American countries; it is less expensive than Europe; and it is ‘accessible, dynamic and stable.’

Its level of development, close to that of European countries, offers interesting professional prospects for students. Its public universities are of high quality. At the University of the Witwatersrand, which specialises in engineering and technologies, 20% of students are from another African country and they include a high proportion of Francophones.

University World News also makes notes about the allure of Morocco (for French-speaking Africans) and Angola (for Portuguese speakers).

What about the rest of the world?

Which African countries hold the largest proportions of students engaged in study abroad?

Africa is on the rise for students around the world

There is also data showing that Africa is becoming more attractive to students elsewhere in the world. For example, IIE’s Open Doors Report on International Educational Exchange, supported by the US Department of State’s Bureau of Educational and Cultural Affairs, reports:

“US study abroad to Sub-Saharan Africa has also been growing in popularity over the past several years in line with the general trend of more study abroad to non-traditional destinations. The trend appears to have continued in 2010/11, with 36% of respondents reporting increases.”

Clearly, Africa is on the move – both in terms of its students’ mobility and in its reputation as a study abroad destination in its own right.