A fascinating study on the use of educational agents in Canada has been released by the Council of Ministers of Education of Canada (CMEC). The study paints a complex picture of the extent to which Canadian education institutions engage with education agents, and how educators select, support, and manage international agent networks.

Because Canada is a leading destination country for international students – and because the study brings in current comparative contexts from other big destination countries like Britain, the US, and Australia – the study is also illuminating on a larger scale than just Canada. It illustrates trends in the way national governments and institutions are responding to the increasing use of agents in international education.

The study, The Role of Education Agents in Canada’s Education Systems, is based on a survey with 145 administrators working in international education in institutions across Canada as well as interviews with 12 education officials and government administrators. “We commissioned the study to give provinces and territories, institutions, and stakeholders a better understanding of the role of that education agents currently play in our education systems,” says CMEC Director General Andrew Parkin. “It will inform ongoing discussions at CMEC about international education and will no doubt be of use to education stakeholders as well.”

Agent use is widespread and on the rise

Most respondents from the education sector – representing the vast majority of the survey participants – reported that their institution uses agents (78%), with most reporting relationships with 100 or fewer counselors.

Agent use is most common in the post-secondary area but it is growing in K-12 as well. One interviewee noted that agents can be particularly helpful with parents of younger children for such things as language barriers:

“We recognise that parents would prefer somebody local to go to … to ask follow-up questions … and to go to if there’s some kind of issue that arises. [We know they’re] trusted partners that … are going to help solve any issues that arise. That is the very best situation for us. They really do become true partners.” 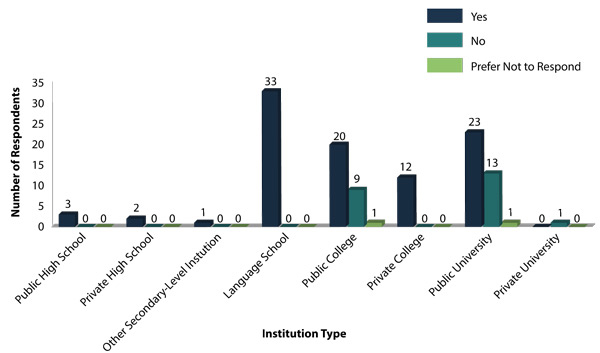 Almost all survey respondents (96%) reported using agents based both in Canada and abroad.

The top countries agents are helping Canadian education institutions to recruit students from are (in descending order):

Why educators work with agents

As for why they use agents, the study found these to be the top three reasons:

“Institutions that contract with agents are not simply purchasing a local presence in a particular market,” continues the report. “They are buying access to the agents’ local networks, their language skills and status as cultural insiders, and their familiarity with the needs of students and parents.

‘[With agents], you can operate at a scale, a breadth that you could never get to otherwise,’ said one college administrator. ‘[You get] really quick access to local markets. [It’s] naïve… [to think] that you’re going to stand at a college fair and that they’ll just come and you’ll be able to enrol them. You don’t have enough staff [and] you don’t understand the local culture and expectations. You could be there at the wrong time. You have to be in multiple places at the same time. [Agents are] essential to manage scale.’”

The study notes that “both jurisdictions and professional associations have developed policies regarding agent use. Most of these are advisory in nature: codes of ethical conduct for agents and institutions, or guidelines for best practice.”

The report adds that, at present, “most [Canadian] provinces and territories have left the issue of education-agent oversight and management unaddressed.” It clarifies:

“Neither the federal nor provincial/territorial governments accredit agents, nor has a regulatory framework like Australia’s regarding the use of agents been created.”

The exception is the Manitoba province, which in 2013 introduced Manitoba’s Education Act, which includes these provisions:

As such, Manitoba’s stance on education agents is much closer to Australia’s, whose Education Services for Overseas Students Act (ESOS) and complementary agent training and registration systems combine for one of the world’s most comprehensive regulatory frameworks.

The Manitoba example aside, it still falls mostly to Canadian institutions to develop and apply best practices in working with agents. “Beyond requiring that an agent be trained or certified through a recognised entity like the British Council, ICEF, or AIRC, institutions must rely on references and word of mouth when weighing the decision to hire an agent.”

So not surprisingly, the study reveals a wide range of institutional practice in Canada with respect to screening and hiring education agents, ranging from more complex models of vetting and selection to much more cursory review of prospective agents’ qualifications.

The authors find a similar range of management oversight for agent networks: “While some institutions have developed robust mechanisms for ensuring that agents receive ongoing training and supervision, other institutions provide little to no training or supervision.”

The study concludes, “Some institutions carefully screen prospective agents, hold agents to high standards, invest in agent success through ongoing training, resources, and oversight, and terminate contracts when evidence of misconduct surfaces. Others are in the process of developing protocols regarding agent use with support from key campus stakeholders and with a view to protecting both student welfare and brand reputation. These actions represent current best practices by Canadian educational institutions that use agents to support international recruitment activities. Other institutions do almost none of these things, relying on agents to recognise that longevity and success in the industry requires ethical behaviour.”

As we have noted previously on ICEF Monitor, all stakeholders have a natural interest in constructive, collaborative approaches to engaging with quality agents that strengthen both the recruitment capacity of institutions as well as the quality of service for students.

The CMEC report argues that governments, institutions, and industry associations all have a role to play in establishing and advancing best practices. In that sense, the study is an important new contribution to long-running discussions across the industry with respect to transparency, accountability, and improved standards of practice.

From the Field: South African ELT rebounding this year
From the field: Vietnam's cash economy and study abroad
Under pressure: Changing markets and the evolution of the university
US F-1 visas down nearly 17% in 2017
Agent perspective on study abroad trends in South Korea
Competition in Chinese higher education sector heats up
Proposed changes to conditional admissions in the US causing concern
Growing questions about the business model for higher education in the US

From the field: The new student recruitment landscape in Saudi Arabia https://t.co/aBaRbaw7gX https://t.co/4vEUkJYjA9 - 3 days ago