As the second largest country in South America, Argentina is both a good source of international students and an attractive study abroad destination. It has a long tradition of higher education, but debate about how to structure and maintain that system is central to the country’s turbulent politics. Today, ICEF Monitor speaks to various international education professionals in Argentina and examines the Argentine Republic, its education sector and students, and its viability for international educators and agents.

Argentine education can begin as early as a child’s first year, but only becomes compulsory at age five. Primary school begins at age six, thus a mandatory year of pre-school serves to prepare children for entry into the national education system. Typically, however, most children enter pre-school before age five.

Secondary education is split into three years of ciclo básico (basic cycle), followed by three years of ciclo orientado (oriented cycle) divided into specific areas of focus such as social sciences, natural sciences, arts, and others. Upon successful completion all students are automatically eligible for acceptance to public universities, with no admissions test required.

For many years, Argentina’s Education Ministry has prioritised universal access to secondary education, and enrolments rose 8% between 2001 and 2010. Looking farther back, in 1950 a mere 10% of eligible students attended secondary school compared to more than 90% today.

In the tertiary sector, Argentina boasts 124 colleges, universities, and technical institutes. The country has the largest enrolment rate in Latin America, with an estimated 2 million students in attendance. The majority attend public institutions, which normally don’t charge tuition for their bachelors and associate degree programmes.

While Argentine universities score well in regional rankings, the national education budget is at just above 6% of GDP according to Ministry of Education figures – higher than many nations in the region but well behind most OECD nations. Argentina’s annual per-student expenditure by tertiary educational institutions is also low, as shown in the chart below comparing OECD nations. 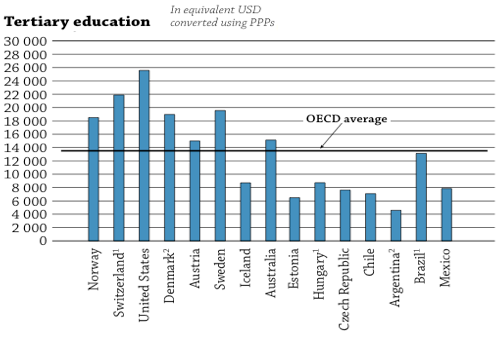 Per student spending at the tertiary level. Source: Education at a Glance 2013 OECD Indicators

The dropout rate in Argentine universities is high, and is a subject of debate in the country. Many sources suggest the rate is as high as 73%. Joseph S Tulchin and Allison M Garland’s book Argentina: The Challenges of Modernization cites a cumulative 80% rate. These figures could hint at a lack of preparedness for university, and a 59th place ranking (of 65 nations) on the OECD’s PISA tests of educational attainment seems to at least partially support that notion.

Despite the dropout rate, education enrolments in Argentina are rising. In addition, the country has increased its international recruitment activities, particularly within the region, and has seen a rise in popularity among students from outside Latin America.

As in many other countries, links between higher education and the private sector have increased in recent years. For example, last year Education Minister Alberto Sileoni presided over the creation of the University Network for Sustainable Solutions and the National Road Network of Universities Petroleum, designed to train students for work in the petroleum sector.

Minister Sileoni described the petroleum agreement as “a strategic partnership between the higher education system and a political project.” And in a clear articulation of his vision for Argentine education, he added that, “Knowledge should not be abstract but applied knowledge that always pursues social justice and [works toward] improving the lives of societies.”

A new influx into Argentina’s universities

Between 2006 and 2013, the number of foreign students in Argentina in undergraduate and postgraduate courses doubled to an estimated 50,000, according to the Secretariat of University Policies of the Ministry of Education. About a third of those students are from Colombia, and two thirds are from Latin America.

Bet E Wolff, Executive Director of the Buenos Aires based study and work abroad agency BEWNetwork, has witnessed the recent influx, and says it is mainly from Colombia, Venezuela, Mexico, Brazil, Uruguay, and Peru. As for why Argentina is popular, she notes:

“There are no entry exams, the level is acceptable and negotiable, it is free, you can live and work here with no restrictions, their currencies are stronger, there is no discrimination, and the night life is big fun.”

The students are also attracted by the quality of the schools and the city of Buenos Aires, where more than 60% reside. Many work to cover expenses and are able to strike a balance with their studies, however while public schools are tuition-free, a high inflation rate is driving up ancillary costs such as rents and prices for everyday commodities.

Enrique Helmbrecht, the President and CEO of the well-known COINED Spanish schools that operate across Latin America, sees a slightly more diverse make-up of inbound students. He explains:

“While our biggest and fastest growing markets over the past few years remain Western and Northern Europe, US and Brazil, we also experience a growing inflow of students from countries like Japan, China, Russia and Australia.”

The Institute of International Education’s most recent Open Doors data confirms the growing US presence in Argentina. During the 2011/12 academic year 4,763 students from the US enrolled in classes in Argentina, up 3.8% from the previous year, making it American students’ eleventh most popular international destination.

MBA programmes are the preferred study paths for these students, but courses fitting under the umbrella of Educational Tourism – everything from the aforementioned Spanish immersion to tango classes – also attract large numbers, particularly from Europe and the US.

Some major considerations for inbound internationals include:

What type of students come from Argentina?

While Argentina is a magnet for foreign students, the education landscape looks very different for locals, whose pesos lack value against foreign currencies. Many economists believe the inflation rate in 2014 could hit 30% or higher. Mrs Wolff, who besides helming her agency has a dual MBA and PhD in economics, put the problem succinctly: “Salaries take the stairs, prices take the elevator.”

However, she added that Argentines are used to overcoming obstacles, and students who want to study abroad often find a way. The most recent mobility data from 2010 shows that more than 9,000 did exactly that, with the top destinations being Spain, the US, Cuba, France, and Brazil. Most needed scholarships, and since 2012 there has been a government grant available for those studying STEM disciplines.

The majority of Argentines enrolled abroad are in graduate degree programmes, and the most popular fields of study are engineering, law, and business. Interest in intensive English programmes is on the upswing, and Argentines already possess the highest level of English in Latin America, with the country ranking 19 of 60 global nations in the third edition of Education First’s English Proficiency Index.

Last July, ICEF Monitor interviewed Gustavo Viale, CEO of InterWay Educational Consultancy based in Buenos Aires. He described the outbound mobility of Argentine university students as constantly increasing, gave important hints about how to tap into the Argentine market, and offered indispensable advice about how to build links with local recruitment agencies. That interview is available here.

Minister Sileoni has described Connectar Igualdad as “digital inclusion,” or a way of fostering equal access to technology and the Internet. This massive programme distributed more than 3.5 million netbooks to 8,800 public schools in Argentina by the end of 2013, and as an extra reward for students, they keep the computers permanently once they graduate.

Educators and agents should be aware of certain challenges associated with working in Argentina. Of special note are those related to the secondary sector, a major source of prospective international students. In recent years that sector has endured broad student protest, and even defiant occupations of high schools lasting for many days.

At issue is the New Quality Secondary School (NESC) reform, which beginning this year aims to streamline national curricula from 158 areas of specialisation into ten broad categories. Students believe that removing specialisations will narrow their future employment prospects, but the government feels pressured to improve PISA scores.

Also in the secondary sector, recent years saw teachers staging a series of salary strikes resulting in many lost school days. An agreement was finally reached at the end of March when the five national teachers unions agreed to a 28.7% across-the-board pay raise, a substantial hike until one considers the country’s even annual higher inflation rate.

Demonstrations and political gatherings occur regularly around Argentina and affect movement, particularly in Buenos Aires. With inflation pushing consumer prices and utility costs up, more protests are likely. Those wishing to work in the country should keep abreast of current events.

In Argentina, free public universities combined with meagre personal resources keep many students at home, yet a difficult employment market is driving locals to seek answers overseas. Hundreds of thousands of citizens have left since 2001. Under such circumstances, outbound student mobility would also be expected to rise, and InterWay’s Mr Viale confirms that, stating, “The amount has been growing dramatically in the last few years.”

Though Argentina is a complex market and the economy is poised at a delicate moment, the country’s population means opportunities exist for educators and agents.

For further research, please explore the list of useful resources below.