As we reported recently, things are trending in the right direction in Australia of late. For the first time since 2009, Australia recently registered an increase in international student enrolment. There were 526,932 international student enrolments in 2013, marking a 2.6% increase over 2012. The 2.6% growth rate compares to an average 5.9% growth rate over the past ten years – but also represents a distinct reversal of the enrolment declines recorded in 2010, 2011, and 2012. 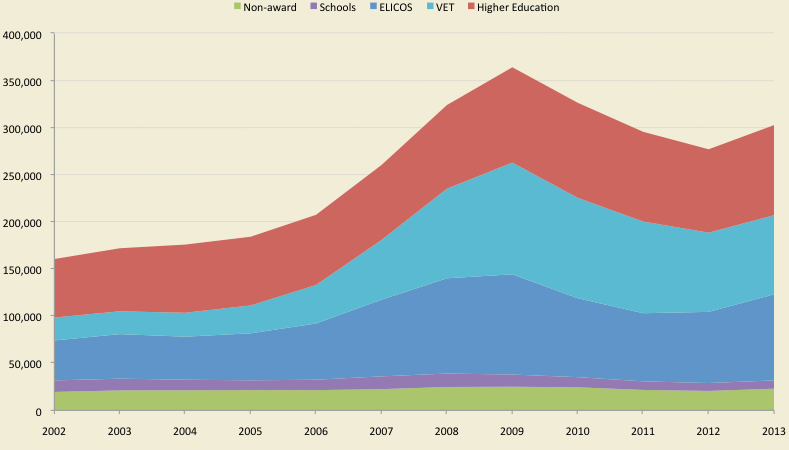 In fact, just-released statistics from Australia Education International (AEI) paint a convincing picture of continuing growth in 2014. The year-to-date (YTD) commencement numbers reveal 21% growth in new student enrolments through the end of March 2014 compared to the same period for 2013.

English Australia notes as well that, while growth was variable across the system, the year-over-year results represent the best enrolment growth for Australia since the previous peak in 2009.

Opportunities in Asia and other emerging markets

Looking ahead, it seems clear that if Australia is to meet its longer-term targets, it will need to balance growth in established markets, such as China, with the development of key emerging markets.

In his remarks at the recent ICEF Australia New Zealand Agent Workshop, Quentin Stevenson-Perks, Assistant General Manager, International Education Division at the Australian Trade Commission (Austrade) noted that one of the major priorities for his organisation is the qualification and identification of opportunities for Australian education providers, including transnational and cross-industry education opportunities and particularly those in Asia and key emerging markets.

In an interview with ICEF Monitor, Mr Stevenson-Perks indicated that markets in the Middle East, Sub-Saharan Africa, South Asia, and Latin America all show strong potential growth for Australian providers over the next ten years. He says that in recent years Austrade has opened new posts in Colombia, Mongolia, Ghana, and Myanmar/Burma. With respect to Mongolia, for example, he notes:

“In Mongolia, Australia has an established presence through the Australian Government’s scholarship programmes but demand from full fee-paying students has been low. Following the opening of its post in Mongolia in 2011, Austrade launched the inaugural Australia Future Unlimited Education Fair in 2012 and followed this up with a second exhibition in 2013. The 2013 exhibition attracted 18 Australian education providers, covering higher education, vocational education and training (VET), English and high school programmes – double the numbers that participated in the inaugural Exhibition (including five Group of Eight universities).”

Given the importance of the rapidly expanding mining and resources sector to Mongolia’s economy, Mr Stevenson-Perks explains that the 2013 exhibition placed a strong emphasis on vocational education and training opportunities, and reports that, following the establishment of the Mongolian post, international enrolments from Mongolia increased from 400 in 2011 to 650 in 2013.

The key emerging markets identified by Austrade are characterised by growing populations of young people and their potential for sustained high economic growth. However, Mr Stevenson-Perks notes as well that each also has important constraints on the domestic supply of quality education along with emerging skills gaps due to their expanding economies.

In the case of Nigeria, for example, he explains that Australia has seen strong growth over the past five years, but the number of Nigerian enrolments is still under 1,000. However, there are strong indicators for further growth ahead in that:

Mr Stevenson-Perks is careful to point out that Australia’s key education markets are located in Asia, which accounted for 75% of international enrolments in Australia in 2013 (see the chart below). Australia’s strong position in the region has been through its large and growing enrolment and alumni base, as well as the extensive linkages its institutions have developed throughout the region. He adds:

“While Australia values these markets, it is also looking to new markets to help ensure that Australia’s international education sector is sustainable, its student body remains diverse, and Australian education institutions are able to access new opportunities to engage offshore through partnerships with other governments or education institutions. For example, through Austrade’s new presence in Bogota, Colombia, it assists 41 Colfuturo scholarship students to undertake postgraduate studies in engineering, environmental studies, agribusiness, science, business, and humanities at universities across Australia.”

Mr Stevenson-Perks concludes that the main message for Australian education providers is that they need to stay agile and adaptable to changing market conditions.

He says Australia has already seen considerable change over the past decade in its top ten markets as a result of changing market conditions, “but the type of market intelligence delivered through the Market Information Package (MIP) means that Australian education and training providers and other stakeholders in the sector are able to make informed decisions about their current and future international activities.” 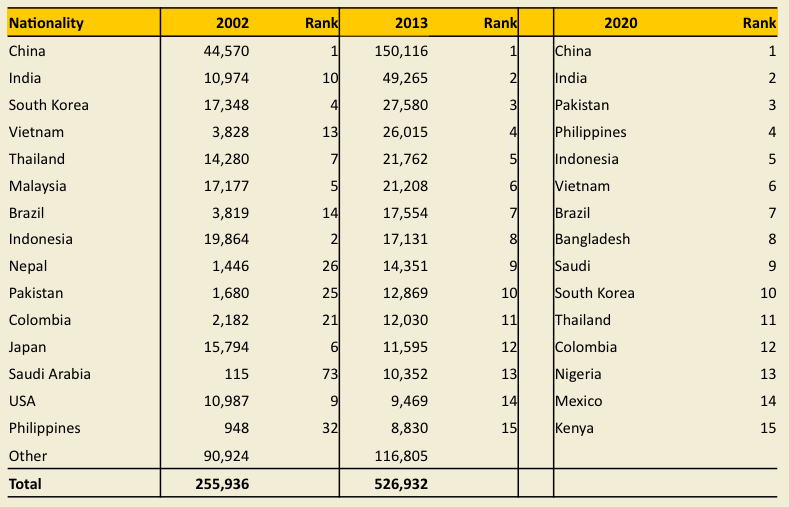 Current and projected (for 2020) ranking of source countries, note especially the shift in source countries anticipated for 2020 (China, India, and Pakistan being the top three). Source: Austrade

Growth for China, India, and Brazil in the future

Samuel Vetrak, CEO of StudentMarketing, picks up on the theme of opportunities in Asia and other emerging and growing markets for Australia’s inbound student recruitment. He says that China, India, and Brazil have a far larger potential for Australia than any other source markets in the coming years and that they all represent some of the biggest sending countries for fee-paying, post-secondary students in general (ranking them first, second, and twentieth respectively), but more importantly:

“All three countries are well-set for a significant further growth in numbers of internationally mobile students. This can be attributed to a mix of factors (the current level of economic well-being, purchasing power, and the demand for quality education increasing faster than domestic education supply, resulting in new and numerous cohorts of international students coming from these populous countries). And, Australia has not reached its potential there (current market share of 15%, 6% and 3% in China, India and Brazil respectively).”

Mr Vetrak also notes that the strongest sending countries are poised for further growth, and while Australia does not capture the market share to the fullest, these countries are far from its previously reached historic maximum. In addition, some source markets have been invigorated recently through additional incentives to study abroad (such as the Ciências sem Fronteiras scholarship programme in Brazil).

He adds as well that Australia provides an interesting value proposition for students from these countries (in terms of visa processing, employment prospects, etc.). “In addition, Australia enjoys a relative proximity to these countries, making it an advantage in comparison to other destinations competing for international students from China, India, and Brazil.”