Nigeria: Rapid growth and a strategic gateway to Africa

The most populous nation in Africa, Nigeria is being touted by some as the next big education market. The combination of a rapidly growing population and burgeoning middle class has given rise to a huge demand for quality education in Nigeria, as well as significant opportunities for foreign education providers to meet that demand.

Today’s ICEF Monitor post draws upon market updates and other insights we gathered at the recent International and Private Schools Education Forum (IPSEF) London Conference to take a closer look at education trends in Nigeria, and explore best practices for approaching this burgeoning market. Though working in Sub-Saharan Africa is not without its challenges, it can be – as those with experience will attest – definitely worth the effort.

Nigeria is on the rise

With approximately 169 million inhabitants and growing, Nigeria is leading Africa’s population rise. Its population is expected to exceed that of the US by 2050, and Nigeria could be the world’s third most populous country by the end of the 21st century, according to UN projections. 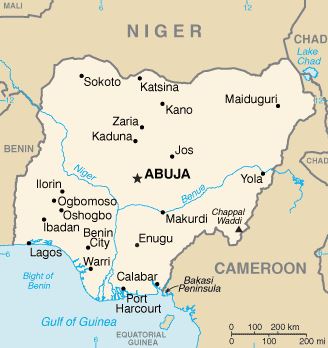 The capital Abuja is often referred to as the “Washington DC” of Nigeria, but the nation’s financial hub – where business gets done – is Lagos. One of the world’s largest urban areas, the population of Lagos has nearly doubled over 15 years to reach 21 million and by 2015, Lagos will be third largest megacity after Tokyo and Bombay.

But population isn’t the only thing on the rise in Nigeria. Boasting the world’s tenth largest oil reserves, Nigeria is expected to enter the “economic stratosphere” between now and 2050, with the highest average GDP growth in the world. Annual GDP growth has been around 7% over the past few years, as compared to 2.8% in the US in 2012 and less than 1% in the UK, that same year.

What does this rapid growth mean for the Nigerian education market? The consulting firm McKinsey has noted that 128 million African households will earn US $5,000 a year or more by 2020, enabling them to spend half their income on non-food items. Furthermore, Africa’s middle class families – those earning US $20,000 or more – outnumber India’s. And according to The Parthenon Group, “Education now ranks as one of the most important requirements of the African middle class.”

But although Africa has made progress in expanding school access in the past decade, it has the world’s lowest secondary school enrolment rates. There are 16 million out-of-school children, and only 6% of eligible tertiary age students are enrolled in tertiary education in Sub-Saharan Africa, leading some to suggest that more schools and more investment in education is needed in Africa. According to the World Bank, however:

“In most sub-Saharan African countries, enrolment in higher education has grown faster than financial capabilities, reaching a critical stage where the lack of resources has led to a severe decline in the quality of instruction and in the capacity to reorient focus and to innovate.”

The entryway for foreign education providers

In Nigeria in particular, the demand for a quality education is prompting some families, especially those from the upper and middle classes, to look to the West. Perhaps not surprisingly, schooling in the UK is a popular choice, given the UK’s historical and cultural ties with Nigeria.

By some estimates Nigerians spend £300 million annually at British universities and elite secondary schools, and invest £250 million in British property, including student accommodation. According to the January 2013 Independent Schools Council (ISC) Census, approximately 1,600 African students are registered in an ISC school, around a third of which are Nigerian. And Iain Stewart, member of the British Parliament, estimates that 30,000 Nigerian students will be studying in various universities across the United Kingdom by 2015. British and other foreign education providers looking to make inroads in Africa may want to take note of such figures.

Mark Brooks, an industry consultant experienced in the region, argues that the key to unlocking Africa is to have a foothold in Nigeria:

“Nigeria is a huge market. There’s never been a better time for schools to develop a relationship with parents over there.”

“The schools in Nigeria wish to develop working relationships rather than be seen as a captive recruitment market.”

In short, contacts are everything in well-connected Nigeria, and any education providers looking to explore the Nigerian market should conduct research to embark on the right approach from a relational and cultural perspective.

While it is important to develop effective and successful relationships with recruitment agents, Mr Brooks also suggests not relying on agents alone, and proactively developing relationships with local partners and schools. Foreign education providers looking to foster links between top schools in Nigeria and the UK should get buy-in from the head and governors, and consider working with school leaders to develop exchanges, for example, to benefit schools and the nation. It is also important to set reasonable expectations: focus on a few schools and linkages, and set a realistic budget for any trips, on the ground work, or fairs, as living costs in Nigeria are high.

But for many Nigerians seeking a quality education at home, the choice is often private schooling. Consulting firm The Parthenon Group has reported that according to the International Finance Corporation (IFC) estimates:

“Private schooling accounts for between 10% and 40% of primary and secondary schooling in Africa, and is highest in Kenya, Nigeria and Ghana at the 40% mark. This is likely to increase as the middle class continues to expand, and parents increasingly view their children as their most important asset. For comparison, rates in other emerging markets vary from 13% in Mexico, to 30% in Ecuador. Around 14% of Brazilian students are in private education, while 20% and 26% of Colombian and Peruvian school goers are enrolled at a non-public institution.”

Low-cost private education is also expanding across Sub-Saharan Africa. James Tooley – a professor of education policy at Newcastle University and the Chairman of Omega Schools, a chain of 40 low-cost private schools across Ghana and Sierra Leone – has found that burgeoning numbers of low income families are willing and able to pay for education. Among the market solutions for education “at the bottom of the pyramid,” Mr Tooley has found that a “pay as you learn” model, which enables students to pay for school on a daily basis using a cash-free card system, effectively meets the needs of families who don’t have the ability or income stability to save and plan.

But why, given that public schools are free, do Nigerian parents send their children to private schools? While the prestige and pedagogical style of some private institutions are factors, the overriding decision is often quality and accountability for ensuring pupils learn. For-profit schools typically outperform the public schools and operate at a lower cost. When the total cost of public schooling is factored in, including uniforms and books, private schooling is comparatively affordable – even for lower-income families.

It is factors such as these – as well as the need to improve curriculum, enhance teacher knowledge, and drive vocational and technical education – that are driving private education investment in the region along with interest in public-private partnerships.

So what can foreign education providers looking to approach the Nigerian market learn from others who have already made inroads in Africa? Iain Colledge, Owner and Director of World Academies, offers the following practical considerations for setting up and running schools in Africa:

Matthew Goldie-Scot, Director at Carfax Educational Projects, notes that some of the greatest challenges can be the tendering process; logistical challenges (such as power outages, roads, and transportation); compliance issues; and safety and security. However, to achieve quick wins, focus on:

As many in the field can attest, if it all goes too smoothly, something is probably wrong. However, there are many positives, and as Mr Colledge notes, at the end of the day, it is important to maintain humour, flexibility, and focus on the students throughout.