The Republic of Costa Rica is known as one of the most stable, prosperous, and progressive nations in Latin America. The country’s higher education system produces more than 45,000 graduates a year, a number expected to increase to 60,000 by 2017, and yet the domestic system is struggling to keep up with rising demand for education. In today’s post, ICEF Monitor offers a market analysis of higher education in Costa Rica, charting the changes and challenges in the region.

Costa Rica began to prioritise education in 1869, when schools were made free and mandatory for all citizens. In 1948 the country’s army was disbanded, freeing up more money for education. Today, Costa Rica is ranked top in Latin America in terms of its ability to develop its human resources, according to the World Economic Forum’s (WEF) Human Capital report. The WEF ranking indicates the presence of highly developed local talent, a major advantage for the country in the region and the wider global economy.

As the demand for higher education in Costa Rica increases, there are insufficient seats available at public universities. This has led to a growing number of private universities in the country, and to the establishment of a government-initiated National Accreditation System for Higher Education (SINAES) to ensure private institutions meet national and international standards. Private institutions certainly appear to have an important role to play vis-a-vis access to education in the country, as José Andrés Masís, Director of The National Council of Rectors (CONARE) affirms. Public universities form a vital part of Costa Rica’s education system, but the private arm is crucial for the country to be successful. He adds:

“The future is much more than public or private. It’s which universities can maintain a high level of quality and best contribute to Costa Rica’s advancement”

But as a whole, universities in Costa Rica are among the best in Central America and several of its public and private institutions are highly ranked by independent analysts. The government in Costa Rica currently spends 7.2% of GDP on education but that percentage may fluctuate, as Costa Rica is in the midst of a presidential runoff, to be decided on 6th April 2014.

In the lead up to this impending political development, PAC candidate Luis Guillermo Solís criticised Johnny Araya of the National Liberation Party (PLN) for backing off a party pledge to raise education spending to 8% of GDP. However, the PLN’s has not called for drastic cuts, but rather a spending freeze at 7% of GDP. The World Bank graph below shows how education spending in Costa Rica has trended in recent years:

If both presidential candidates can be taken at their word, it seems likely that Costa Rica’s education sector will continue to receive public funding at or near current GDP rates.

Of primary importance in today’s global economy is a level of English proficiency. Costa Rica ranks in the fourth lowest of five ranking bands on Education First’s English Proficiency Index (EF EPI). However, more than half of the region ranks even lower. The top six Latin American countries by English proficiency, as measured by the EPI, are: 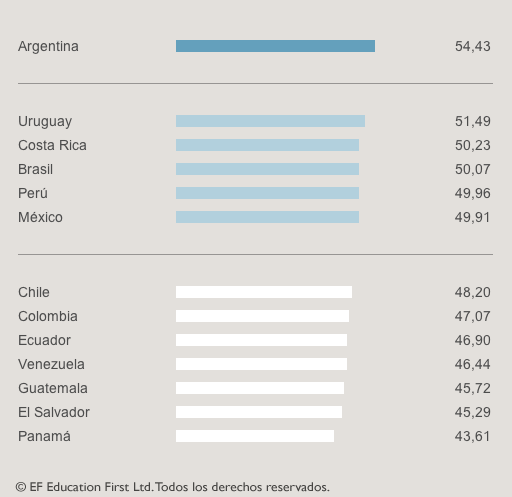 Costa Rica included English as a mandatory subject in primary and secondary schools in 1997, and higher national proficiency remains a goal of the government.

In terms of study paths, education and social sciences are popular with Costa Rican students. In fact, more graduates in these areas are produced than can be absorbed into the local job market. While some education observers see this as a problem, others are not sure universities should be concerned about matching graduates to job openings.

“Insofar as there is an overlap between the university’s mission and job-training, it is to encourage the kinds of critical thinking skills that enable graduates to adapt to a changing future economy, not to plug into the existing one.”

Yet a shift toward producing a higher number of ready-to-work graduates has already begun. Technical and trade schools like the National Institute of Learning (INA) are experiencing enrolment growth, which has in turn prompted universities to refine their curricula to offer more hands-on learning. Meanwhile the Ministry of Education has stated that it wishes to link university curricula to the world of work.

One unambiguous strength of Costa Rica is its Internet connectivity. As of February 2014 96% of all schools had been connected to the Internet, coupled with a concerted effort to improve connection speeds across the school system. In general, Costa Rica has experienced an Internet explosion, with connectivity more than doubling between 2010 and 2013.

Comprehensive mobility figures are not readily available, however Costa Rica’s emigration rate is quite low compared to other Latin American countries, with only 3% living in another country as immigrants. This suggests that Costa Ricans who attend college elsewhere may often do so with the intent of returning home.

In terms of drawing international students, Costa Rica is attractive due to several factors. While the universities are important, the country’s biodiversity is a key enticement for students involved in environmental sciences. In a country that has explored becoming carbon neutral by 2021, and is the first in the Americas to completely ban sport hunting, internationals students have the opportunity to work in diverse ecosystems that don’t exist in their home countries.

Costa Rica maintains links and draws students from numerous countries, but it has grown particularly popular with US students, who showed a 9.3% increase in arrivals during 2011/12 for an estimated total of 7,900 American students studying in the country that year. Costa Rica is now the eighth most popular destination for US students. In addition, North Americans make up one of the largest groups of permanent immigrants, along with Central Americans.

France is also a strong education collaborator with Costa Rica and has built several academic partnerships, including the 2011 opening of the Jacques-Yves Cousteau Observatory, and the creation of the of UNESCO-Cousteau Chair at the University of Costa Rica. Such links have resulted in significant interchange of students between the two countries.

One of the most popular occasions for making contact with Costa Rican students is during ISN’s Latin Fair Expo, the 2014 version of which will take place October 30 in the capital city of San José. At the 2013 version, a dozen US universities made academic presentations, mainly seeking applicants for courses in technology, engineering and science. The US is a popular study destination for Costa Ricans, with 1,074 students heading “stateside” in 2013.

Coming in April 2014 is the EDUvirtualEXPO Latin America and Europe, a virtual fair that targets students from the entire Central and South American region, as well as Spain and Italy. Its five areas of focus are language programmes, vocational and short courses, undergraduate, postgraduate, and Master of Business Administration (MBA).

In terms of attracting students, financing is key. Canadian Trade Commissioner Alexander León said of last year’s EDUFINDME trade show, which was held in San José in September 2013, that funding and scholarships were the main concern of the students in attendance.

Costa Rica is a quality source of prospective international students, and is also an attractive regional study destination, but there are also calls for a shift of emphasis in higher education policies toward those that would push more students into STEM subjects. Advocates of the idea believe Costa Rica needs graduates in those areas to keep pace in the global economy.

But at the same time, inflation has slowed in the last year, the presidential frontrunner has campaigned on an anti-corruption platform, and both candidates have pledged to tackle inequality. This Sunday’s runoff election will ultimately determine which direction Costa Rica goes, in education and other matters.

This entry was posted in Most Popular, Regions, South & Central America.