We reported last year on the dramatic growth in enrolment in international schools – that is, those primary and secondary schools that offer a curriculum different than that of the country in which they are based. The International School Community blog notes that global enrolment in such programmes has grown dramatically over the past decade and more, rising from roughly one million students in 2002 to more than three million by 2012.

The UK consultancy ISC Research estimates that there are more than 6,500 English-medium schools worldwide, nearly half of which (3,292) are British. ISC Research Chairman Nicholas Brummitt has projected that by 2024, there will be over 12,000 international schools teaching 6.9 million students generating an annual fee income of over US$62 billion (£37 billion).

These broad market trends are front and centre this year in an annual survey that provides both a detailed snapshot of international student enrolment in British independent schools as well as the continued expansion of overseas campuses for UK-based schools. The latest census conducted by the Independent Schools Council (ISC) in January 2014 gathers responses from all 1,257 ISC member schools. 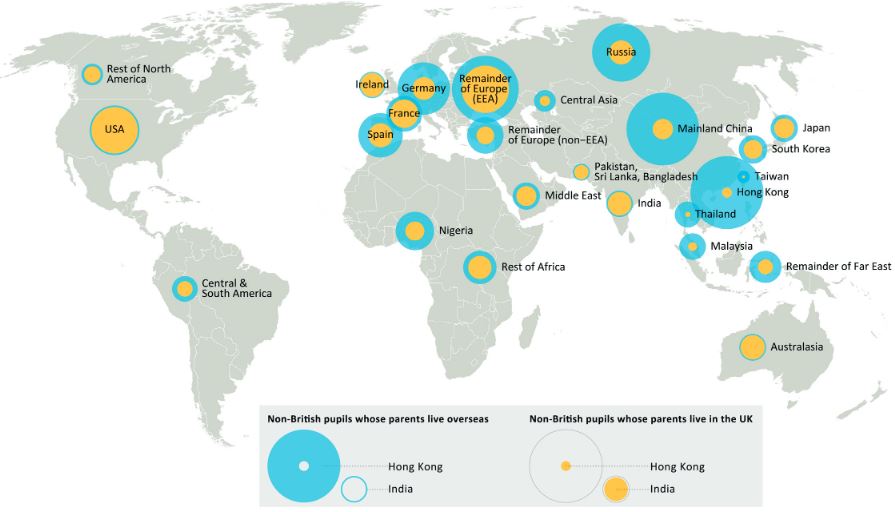 The ISC census finds that among member schools there are currently 24,391 non-British students enrolled whose parents live overseas – representing roughly 5% of the total enrolment of ISC members – as well as a further 11,329 foreign students whose parents live in the UK.

The census indicates as well that a majority of foreign students in British independent schools enrol in their last two years of secondary studies (54.4%), choose co-ed schools (80.9%), and attend as boarding students (91.3%).

As the following chart illustrates, the enrolment base for independent schools in the UK has shifted over the past several years with greater proportions of students coming from both Mainland China and Russia from 2007 onward. 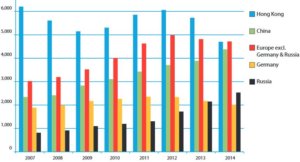 The ISC census report further notes that this enrolment is concentrated among the roughly half of the Council’s UK members that hold Highly Trusted Sponsor (HTS) status under the UK Border Agency’s regulations for Tier 4 visas:

“Since 2009, schools wishing to recruit pupils from outside Europe have been required to hold a Tier 4 licence, issued by the UK Border Agency. Regulatory changes in 2011 imposed a further requirement: that the schools hold HTS status within Tier 4… Our census discloses that 683 ISC schools are Tier 4 sponsors, with 645 of these holding HTS status. At those schools holding a Tier 4 licence, there were 24,084 non-British pupils with parents living overseas, of whom 18,347 were pupils from beyond the EEA [European Economic Area].”

Branch campuses on the rise

In addition to such detailed findings on the international enrolment base at independent schools in the UK, the census also highlights a rapid expansion in the overseas campuses for leading British schools. Indeed, the number of overseas campuses of ISC members has nearly doubled over the past two years, and offshore enrolment will shortly exceed the number of international students attending independent schools in the UK.

“A growing number of ISC schools are operating overseas campuses,” notes the ISC census report. “In 2014 there are 39 such campuses educating a total of 22,514 pupils. This represents a rise on last year’s figures of 29 campuses with 18,784 pupils.”

A related report from TES Connect adds that leading private schools have opened campuses abroad since 1998, when Harrow School set up a branch in Bangkok, Thailand. Other schools including Dulwich College followed suit, which now has “a network of seven schools in Asia.” TES Connect also notes that “Wellington College built a ‘replica’ school mimicking its architecture in Tianjin, China, with another opening in Shanghai this August. Epsom College is opening its first overseas school in Kuala Lumpur, Malaysia in September, and Brighton College runs two campuses in the United Arab Emirates.”

The following table summarises the locations for the 39 offshore campuses reported by ISC members for 2014. 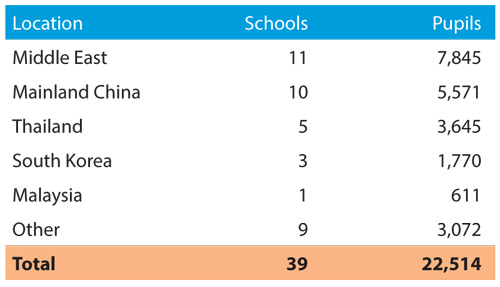 Barnaby Lenon, chairman of the ISC, anticipates the broad effects of growing offshore enrolment in an interview with TES Connect:

“The rise in the numbers of pupils [in ISC school branches abroad] is going to be quite dramatic and the numbers of pupils in our franchise schools will rapidly overtake overseas pupils being educated here. It might slightly depress demand in the UK, but for most independent schools it is being used to pay for bursaries and attract a wider range of people to their UK schools.”

For additional background, please see a summary infographic for a helpful snapshot of independent schools in the UK as well as the complete ISC census report for 2014.

This entry was posted in Europe, K-12, Most Popular, Regions, Research, United Kingdom.