A month ago, we wrote of the Australian education sector’s anticipation of how the new government might approach the international component of the industry, which has weathered substantial declines over the past several years.

Now, there are signs of hope that (a) the international education sector, looked at as a whole, is firmly on the path to recovery and (b) the new Coalition government in Australia is committed to strengthening the country’s competitiveness as a leading destination for international students.

Commencements up year-to-date, almost across the board 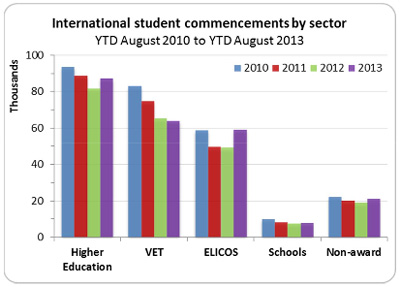 Moreover, this 7.4% compares favourably to the average annual increase of 4.9% over the preceding 10 years.

The news is less positive for the Vocational Education (VET) sector, however, which is registering continued international enrolment and commencement declines and is troubled by mixed signals from the government regarding how much it may change policies to help bolster the sector.

Here is a more specific breakdown of commencements by sector YTD August 2013:

Across the board, commencements grew at a faster rate than enrolments, possibly signaling a strengthening enrolment trend for Australia going forward.

Even the VET sector, which declined both in terms of enrolments and commencements, saw a much more marginal dip in its commencements (-1.9%) than in its enrolments (-8.4%), which could be a sign of a slow turnaround.

Of the Higher Education sector, an accompanying AEI report notes:

Looking specifically at ELICOS and VET in terms of the most important nationalities making up their international student figures, we note the following:

Australia’s new Minister of Education, Christopher Pyne, spoke at the Australian International Education Conference (AIEC) in Canberra on 9 October, and to warm reviews for the positive messages he brought of the government’s commitment to the sector. Mr Pyne said:

“One of the Coalition’s key priorities will be restoring international education to its rightful place as one of our most valuable exports.”

The Minister added, “I know you’ve had it tough,” and alleged that the previous government’s “mismanagement of changes to visas wounded an already fragile industry at a time when the high Australian dollar was dramatically starting to impact on student numbers.”

He said that his government would “respond fully” to the suggestions of the Chaney Report and would “make it a priority to finalise the list of non-university providers to be offered the streamlined visa arrangement.”

This last point is a huge one for the VET sector as it continues to work to reverse a declining enrolment trend. Under those earlier reforms, which came into effect in July 2012, international graduates of Australian universities were entitled to remain in the country and work for up to four years after graduation. However, the government has yet to extend these same visa provisions to private-sector providers.

Outside of the Streamlined Visa Processing (SVP) provisions, international students enrolled with private providers are allowed to work “up to 18 months and then only if their qualifications are in recognised areas of skills shortage.”

Some observers have noted the government’s hesitancy to expand post-study work rights for private providers may be due to a concern that this will threaten domestic workers’ jobs in entry-level occupations.

This issue persisted around the recent AIEC conference as initial excitement over the Minister’s remarks was tamped down when rumours began to circulate that a significantly reduced number of private providers would be considered for the expanded list of schools eligible for SVP.

The response from Claire Field, CEO of the Australian Council for Private Education and Training (ACPET) reflected the industry’s heightened expectations in the wake of the Minister’s AIEC speech:

“The rumours swirling around the AIEC conference were loud enough to make it to me in Indonesia, where I was advised that a much reduced list of some 20 or so higher education institutions was being considered for release. If this rumour has any truth to it, this would be a (further) setback for the many VET, ELICOS and schools all with an outstanding record of delivery to international education students and with a strong visa compliance track record.”

“The criteria used by the Department of Immigration to ensure the universities had strong track records of visa compliance are publicly available, see page 15 of the Guidelines for University Participation in Streamlined Visa Processing.

It is my understanding that approximately 90 providers meet these criteria and are eligible to be invited to opt-in to SVP arrangements. It is this list of providers, and the transparent criteria used to compile the list, that ACPET is calling on the government to release urgently.”

Additional questions about the government’s plans for post-secondary, and the VET sector in particular, were raised in mid-September when the ministries responsible were restructured.

“Providers are scratching their heads over the arrangements, which will force some to deal with four federal portfolios,” observed The Australian recently.

“The change raises many questions. Do vocational colleges with international students deal with the department of industry, education, or both?

Previously, there were talks of a merger between the two education regulators (the Australian Skills Quality Authority for the vocational sector and the Tertiary Education Quality and Standards Agency for higher education). However, the department changes now make this merger unlikely to go ahead.

At the least, the restructuring signals the government’s intention to administer the VET and higher education sectors as distinct streams of education and training. The new structure may help strengthen the role of VET providers in giving innovative skills training to Australians, but for the moment the impact of this new model on the VET sector’s international programmes is anything but clear.