Global enrolment by level of education. Enrolments in primary and secondary education have risen from 400 million and 184 million in 1970 to 691 million and 544 million in 2010. Over the same period, the number of students in tertiary education rose from 33 million to 178 million. Source: World Bank.

Among the report’s key background findings: 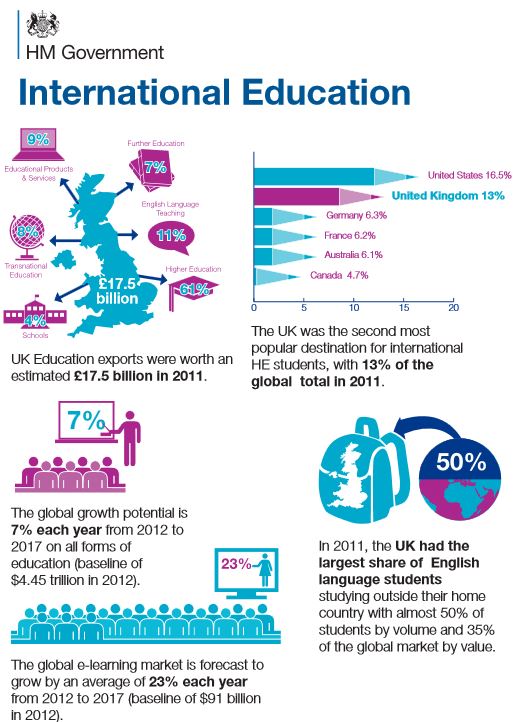 An infographic from the UK government on the international education sector.
Source: Department for Business, Innovation and Skills.

Prepared by the Department for Business, Innovation and Skills (BIS), the report sets out goals and strategies for international student recruitment, transnational education, education technology, partnerships, and branding.

It also intends to “explore opportunities to broker new partnerships with countries looking to send large numbers of students to the UK on government scholarships (such as Brazil’s Scientific Mobility scholarship programme) and to support an interdepartmental initiative to promote engagement with “the 200,000 foreign students who graduate from UK universities every year.”

The strategy announces a planned expansion of the Education UK recruitment website operated by the British Council: “An enhanced website will represent boarding schools, English language schools, colleges and universities as well as the UK transnational education market. It will be easier for students to search for courses, institutions and scholarships and to find reputable agents in their own country.”

“Universities that offer courses overseas will be inspected more rigorously to avoid scandals over quality. Speaking at the launch of the strategy in London on 29 July, David Willetts, the universities and science minister, said that oversight ‘needs to be beefed up. There will be a lot of future growth in provision overseas, and I have asked the [Quality Assurance Agency] to make sure it has got the proper regime in place,’ he said.

Mr Willetts said that the watchdog would introduce a ‘risk-based’ inspection scheme for overseas courses similar to the approach that will be adopted domestically later this year. The approach sets more frequent or tougher inspections for institutions deemed to be more of a hazard.”

“It is good that the government has recognised that education could be one of the key growth sectors of the UK economy for the future, and is prepared to support and encourage UK education providers of all types to expand our business,” said English UK Chief Executive Tony Millns. “It is especially good that the English language is an integral part of the strategy, since English is arguably our most successful export ever and a source, along with our education, heritage and culture, of much of the UK’s soft power.”

Other observers have wondered if the government’s ambitious strategy for the sector is at odds with more restrictive British immigration policy in recent years and with the continuing debate over immigration targets in the UK today. Interestingly, the Global Growth and Prosperity report appears to anticipate this critique and offers an important signal of the government’s intentions with respect to international students:

Universities UK Chief Executive Nicola Dandridge picked up on this critical issue in her organisation’s response to the government strategy:

“It is important and welcome to hear the government state so clearly that genuine international students are welcome in the UK and that there is no cap on numbers. Looking ahead, we would like to see the government go even further in terms of growth. The view in the strategy that the number of international students in higher education can grow by 15-20% over the next five years should be adopted as a cross-government target.

The challenge will be to make sure that the UK’s student visa rules are properly understood internationally and that international students do not become caught in efforts to bear down on immigration. Visa procedures should be implemented in a way that is consistent with the strategy’s commitment to growing international student numbers. Students and talented academics will go elsewhere if they do not feel welcome.”

As this comment suggests, the success of the government’s new international education strategy may ultimately hinge on its success in harmonising immigration policy and procedures, especially given that international students studying in Britain account for the lion’s share of UK education export revenues.