Have we reached an inflection point for mobile marketing in student recruitment?

Mobile marketing is hardly a new idea. Indeed, considerable ink has been spilled in the general press and otherwise as to the rising share of Internet traffic claimed by mobile and the expanding range of mobile marketing ideas and strategies either in use today or on the drawing board for tomorrow.

We come back to the topic in today’s post though because it feels to us like we are approaching – perhaps we have reached it already – an inflection point for mobile marketing in international student recruitment. Because of this, ICEF Monitor readers can expect more on mobile marketing in our digital pages in the months ahead.

For the moment though, let’s consider a few recent findings on the rising tide of mobile Internet usage and how this is beginning to impact marketing spending and marketing strategy. 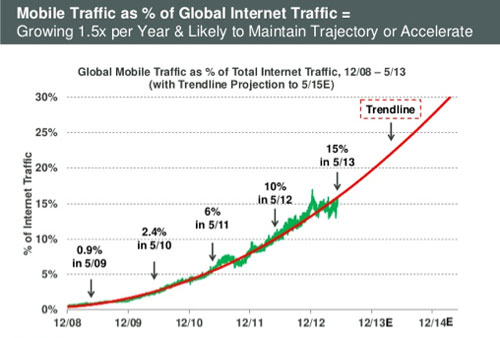 By some estimates, mobile will overtake desktop Internet access as early as next year – check out the infographic at the end of this article. Another fact to highlight in the infographic below: women aged 35 to 54 are the most active group in mobile socialisation. In other words, don’t just think of students when it comes to mobile marketing; consider the parents as well.

Mobile usage in Europe and China

In looking at mobile usage in Europe, the UK, Ireland and Russia lead the pack, as this graph illustrates: 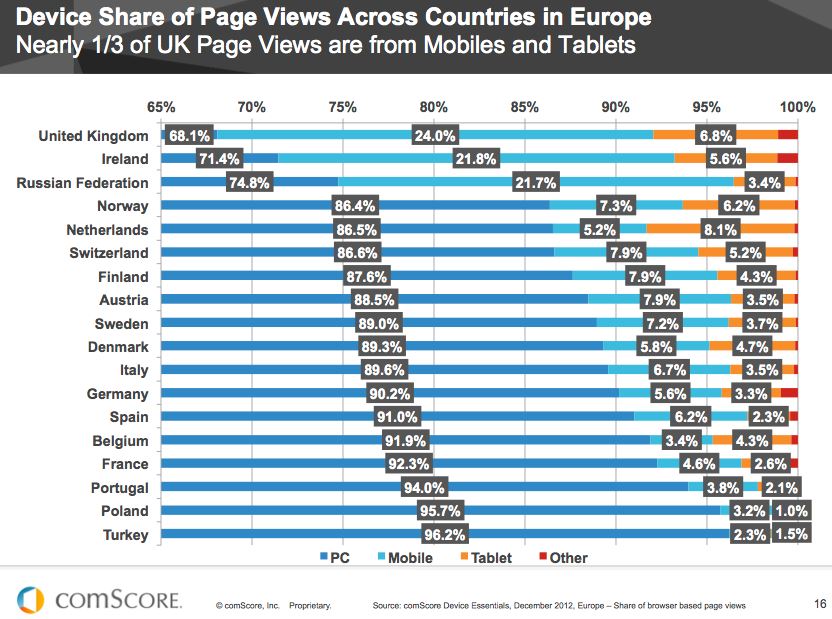 And in China, current data indicates that mobiles have already taken over desktops (see the chart below). 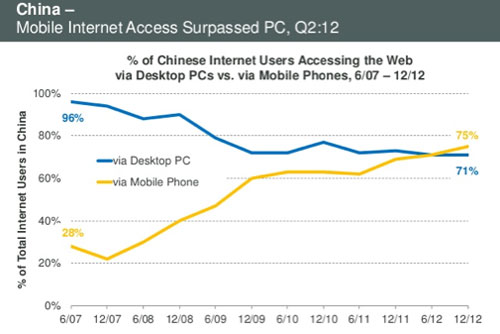 “Marketers need to acknowledge that mobile advertising is now becoming mainstream; at the same they need to think holistically about how mobile interactions can support their marketing and customer relationship aspirations and avoid treating mobile advertising as a channel silo,” said Andrew Frank, a Gartner analyst.

Looking just at ad spend patterns in the US, Mobile Marketer reported in June:

“Mobile’s share of digital ad spending is growing more quickly than expected and, as a result, the spend on desktop ads will peak next year as marketers turn their focus to reaching smartphone and tablet users, according to new data from eMarketer.

In 2013, the bulk of incremental growth in overall digital advertising will come from mobile, which will account for US $7.7 billion of the US $41.9 billion spent on digital ads this year. The trend will accelerate going forward, with desktop banner and search advertising expected to see flat or declining growth in 2014 for the first time ever.”

“Consumers today spend more time with mobile devices than ever before,” said Clark Fredricksen, vice president of communications at eMarketer. “They’re also more likely than ever to research and buy products using phones and tablets. As a result, mobile advertising is on track to account for over 40% of digital ad spending in three to four years. It’s incredible growth.”

In September 2012, ICEF Monitor reported the finding that 52% of US college prospects viewed educator websites on mobile devices.

But more recent data suggests that the use of mobile devices among prospective students, and the degree to which mobile factors in student recruitment, has only expanded in the year since.

A new study – 2013 E-Expectations: The Impact of Mobile Browsing on the College Search Process – produced by Noel-Levitz, OmniUpdate, CollegeWeekLive, and the National Research Center for College & University Admissions reports the following:

The study is based on a survey of over 2,000 college-bound US high school juniors and seniors, and covers a wide range of their online and mobile browsing behaviour. In order to determine the impact that mobile browsing is having on the college search process, it explores their usage of email, phones, and social media, as well as the influence of websites on their perception of a campus and a college website’s content priorities (as illustrated below).

As these latest figures suggest, mobile has moved from the nice-to-have source of competitive advantage that it may have been in years past to a must-have aspect of an overall web strategy today.

It would not be overstating the case to say that websites aimed at prospective students now must include a mobile site or reflect an adaptive or responsive site design in order to effectively reach their intended audiences.

In the coming months, we will take a closer look at various aspects of mobile marketing and how the growing importance of mobile continues to shape and challenge online marketing conventions going forward.