This record-setting number counts those students engaged in long-term studies of six months or more and holding a student visa for Canada (known as a “study permit” in the Canadian system). As such, it does not fully reflect the total population of international students in the country as many more students would have come to Canada in 2012 on tourist visas for programmes of less than six months (such as short-term exchanges or language studies). Many more still are continuing students that arrived previous to 2012, and in fact the total number of international students enrolled at Canadian institutions for six months or more now surpasses 260,000.

Government estimates place the economic impact of the international education sector in Canada at more than CDN $8 billion per year. 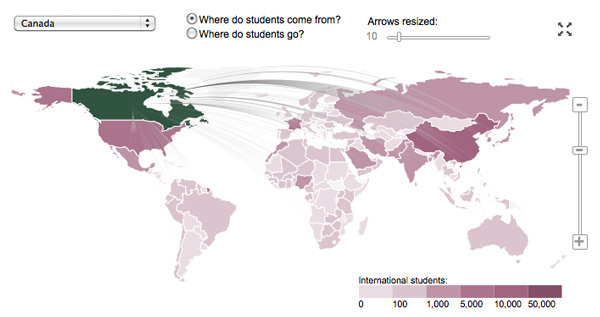 News of Canada’s record year comes on the heels of a number of important developments, including ample indication of the country’s growing appeal as an international study destination and proposed changes to the Canadian student visa system scheduled for implementation in 2014.

“Canada competes globally for the best and brightest minds, so we are continually working to make studying in Canada an attractive choice,” said Canadian Citizenship, Immigration and Multiculturalism Minister Jason Kenney.

“Through our proposed improvements to the [student visa system], we will further improve Canada’s already strong reputation.”

“Where international education was formerly appreciated for promoting cultural awareness, knowledge of transnational issues and language skills among youth, today it is also seen as a vehicle for establishing durable social, political and trade relationships between countries.”

“Once a predominantly provincial and domestically oriented policy sphere, education has become a centrepiece of Canada’s approach to international trade and foreign affairs.”

“Our world-class universities and technical colleges are at the forefront of this shift. With an increasing focus on international partnerships and collaboration, they are impacting Canadian society well beyond the campus setting.”

“Take, for example, the international business student from China who, following her studies in Toronto, stays on to help her Canadian employer expand its operations in Asia; or the undergrad from Regina, who took language classes while on exchange in Spain and now works in sales targeting Latin America; or the Ukrainian public policy student who, after interning with an MP in Ottawa, returns to his country to press for democratic reforms and minority rights.”

“Examples like these are abundant across Canada. They illustrate the ways in which international education can help bolster bilateral goodwill, open trade avenues, and share Canadian values.”

As part of its greater emphasis on the sector, it also appears that the Canadian government sees education as a way to help close projected labour market gaps in the Canadian economy.

Projected skills shortages are a major concern for Canadian educators as well. A January 2013 report from the Research Universities’ Council of British Columbia found that almost 18,800 jobs would go unfilled in Canada’s westernmost province alone in 2020 because of a lack of graduates with adequate post-secondary education or training.

Educators and policy-makers alike are understandably concerned about the potential drag on the Canadian economy of any such skills gaps and this is likely to keep strategy and policy for international education front and centre in Canada for years to come.

“Attracting and retaining the best and brightest immigrants from around the world is part of the government’s commitment to grow Canada’s economy and ensure long-term prosperity,” concluded Immigration Minister Kenney.