The ICEF i-graduate Agent Barometer, now in its sixth year, has elicited a record number of agent responses (1023 from 107 nationalities) for its 2012 edition, providing a robust and comprehensive understanding of the international education market as seen through the eyes of education agents.

It is a great year to have such excellent participation in the survey, given the turbulence we saw quite frequently throughout the year in leading higher education markets. Various countries seemed to become either more welcoming or less so to international students as a result of such things as visa policies, national immigration climates, government/industry collaboration, marketing activities/bilateral agreements, and safety issues. Did such a year affect the attractiveness of the usual leading country’s appeal to international students, according to agents? To some extent yes, and to some extent, no.

The combined responses of surveyed agents representing 107 source countries provide us this list of the most attractive study destinations in 2012, with the US in the lead (73%), Canada and the UK tied in second place (64% each), Australia in third place with 48%, and New Zealand in fourth (32%), just ahead of Germany (31%). 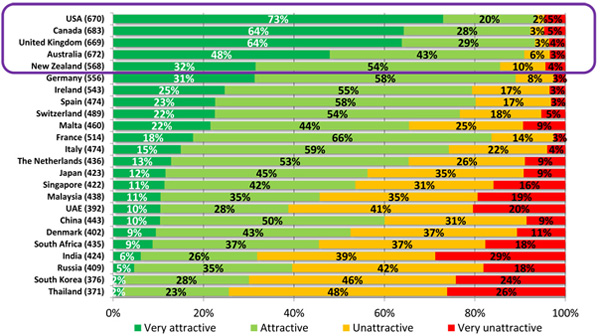 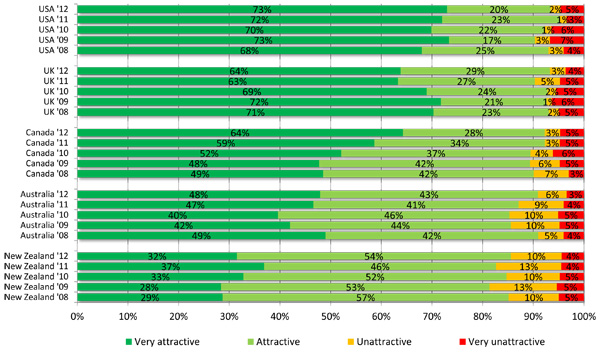 Also notable when we look at the years 2011 to 2012 is the fact that the UK remained stable despite fears that its more restrictive visa policies announced this year would dampen international student interest in studying there.

Australia also held its ground, gaining one percentage point from 2011. This may come as welcome news to the Australian international higher education industry, which has seen billions of dollars disappear from the sector since 2009, and which is hoping to be on the road to recovery.

Among emerging markets for study abroad (the top ones being China, Japan, Singapore, Malaysia, and South Africa), attractiveness rankings remained mostly stable year-over-year with China and Japan in the lead. When looking at emerging markets, what is most interesting is their popularity in certain regions. For example, Singapore is the most attractive among Asian agents, South Africa among South American agents, China among European agents, and Malaysia among African agents.

Attractive is one thing, but what’s the best?

Canada may be rising overall in attractiveness as a study destination, but when it comes down to individual placements for various types of programmes, the US and the UK dominate agents’ responses for what’s “best” (with one exception: Australia) in terms of certain programmes. Here’s the rundown:

Other highlights of the 2012 Agent Barometer study include:

The Canadian government’s continued focus on international education and increasingly open immigration policy are likely factors in Canada’s ascent in the rankings.

Meanwhile, despite the British government’s tightening of visa restrictions that had the university and college sector so worried this year, agents have not seen marked changes year-over-year in the attractiveness of this study destination, perhaps because of how historically well established the UK is as a leading study destination and because of the continuing prestige of British education and institutions.

As for the stability of Australia’s attractiveness from 2011 to 2012, this may be a sign that Australia’s recovery  – from, among other things, the hit it took in 2009 due to safety concerns for international students – is off to a good, if not dramatic start.

“We are delighted to see such a significant increase in agent responses this year,” said ICEF CEO Markus Badde. “Agents offer invaluable insights on global market trends and recruitment strategies and the response rate of 2012 helps us reflect their perspectives in a very meaningful way.”

For more information about the ICEF igraduate Agent Barometer, please visit the i-Graduate website and check back with ICEF Monitor for additional follow-up reports.