Look around at education sectors in many countries – and into every level and niche – and one characteristic is increasingly common: the presence of private funding and participation, even in areas traditionally thought of as completely public. Private contributions are affecting the K-12 and tertiary levels, domestic and international operations, and offline and online delivery models, providing both start-up financing and ways of improving or expanding existing services.

For a general, global sense of the growth of private sector funding at the tertiary level we can look at the chart below from the Organisation for Economic Co-operation and Development (OECD) comparing 2000 to 2009. The OECD notes of the chart:

“On average across OECD countries it more than doubled, but countries like Austria, Portugal and the Slovak Republic had growth indexes exceeding 500 points. In 2000, the United Kingdom already drew 32.3% of its expenditure on tertiary education from private sources and further increased it to 70.4% in 2009.” 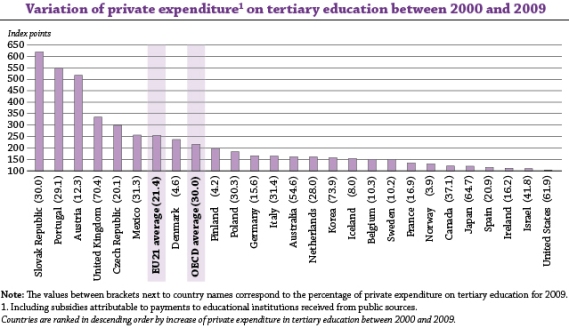 Another interesting point the OECD summary makes is:

“A simplistic interpretation might suggest that countries have substituted public funding with private resources. On the contrary, the evidence shows that the increase in private expenditure did not occur at the expense of public funding. In addition, public funding for tertiary education increased in the same period from an index of 100 in 2000 to an index of 138 points in 2009 across the OECD.”

Readers will note that the US shows the least growth in private funding from 2000 to 2009, but there are anecdotal reports to suggest this is changing rapidly, especially as it relates to the provision of technology-based services and to the recruitment of international students.

In fact, at the recent 2013 Association of International Education Administrators Annual Conference in New Orleans, James Cooney, vice provost for international affairs at Colorado State University, spoke of his delight at his school’s partnership with INTO University Partnerships, which recruits students into pathway programmes that it runs in partnership with Colorado State. Inside Higher Ed quotes Cooney as saying:

“If you’re doing on international enrolment what you did 10 years ago, you’re missing the boat.”

There are many factors compelling institutions to look at private sources of funding and/or private partners to help them deliver core services:

Which areas are particularly noteworthy in terms of private investment?

Pathways: While universities are becoming more and more interested in courting international students, they are also needing to make sure they are qualified for academic programmes in terms of language and credentials. Enter pathway programme providers, many of them private. As we explained in a past ICEF Monitor article:

“The pathway market is dominated by a small number of large players, all backed by private capital, with Kaplan, Navitas, INTO, and Study Group being among the most prominent providers in this space. Each of these privately controlled firms has registered significant expansions in their respective portfolios of university partnerships in recent years.”

INTO specifically has announced major new funding from a leading US equity firm.

New institutions or campuses: Just one example is that of Laureate Education, which operates a network of 65 universities in 29 countries. Laureate Education has just received a US $150 million investment from the World Bank.

Expanding existing institutions: Britain is particularly keen on the use of private capital to expand the British brand on a global scale. Speaking at the Goldman Sachs-Stanford University Global Education Conference in California in 2012, UK’s universities and science minister David Willetts said:

“Our universities are well-financed for what they do but under-financed for big expansion. I want to see investors from Britain and abroad helping our universities access these big overseas markets. I know that companies like Goldman Sachs … are keen to investigate this possibility.”

Expanding services: Outsourcing is big in every sector and level, including K-12 in the US. The Huffington Post reports that, “In the venture capital world, transactions in the [US] K-12 education sector soared to a record US $389 million last year, up from US $13 million in 2005.”

They quote Michael Moe, the founder of GSV Advisors, an investment firm in Chicago that specialises in education, as saying that the goal is “an education revolution in which public schools outsource to private vendors such critical tasks as teaching math, educating disabled students, even writing report cards.”

Education technology: The Wall Street Journal reports in an article on private investment in K-12 technologies in the US: “According to Thomson Reuters, US venture capitalists invested US $429.1 million in 82 education-technology deals last year, up from US $334.3 million and 58 deals the year before.”

Then there’s tertiary education, with education providers more and more driven, at least in part for revenue reasons, to deliver programmes overseas or domestically at reduced cost, which is spurring the need for online delivery models, including MOOCs.

Overall, there’s demand among students for technology integrated into education and a lack of capacity/knowledge within institutions themselves for how best to meet this demand.

All of this is creating incredible demand for technology companies to contribute their services to the education sector.

Is it all for the good?

Not everyone is on board with the increasing presence of private money and involvement in education.

For example, Diane Ravitch, a New York University professor, writes regularly about the problems she sees with the move toward private capital. She asserts that “the bottom line is that they’re [private companies funding/providing public school services] seeking profit first.”

But in a new environment in which change is the only constant and public funding is often stagnant or declining, and in which business models are under pressure, it is unlikely that there will be any reversal in the trend.

The question about whether for-profit motives are detrimental to the provision of a public good is an age-old debate unlikely to be resolved anytime soon. What is less debatable is institutions’ need to survive and adapt in a dynamic marketplace and the need for education systems to continue to respond to the challenges of technological, social, and demographic change.