New enrolment data from the Australian government shows that the Australian international education sector is, at best, in the early stages of recovery.

Most of the new data point to continued enrolment declines with the exception of one sector: ELICOS (the English-language training sector), which in recent years has been particularly hard hit. (Please note that we have used Australian government data up to December 2012 to report on international student enrolment and commencement trends; other sources linked to in this article are based on year-to-date figures from earlier in 2012.)

This is the Australian government’s latest summary of current international education trends: 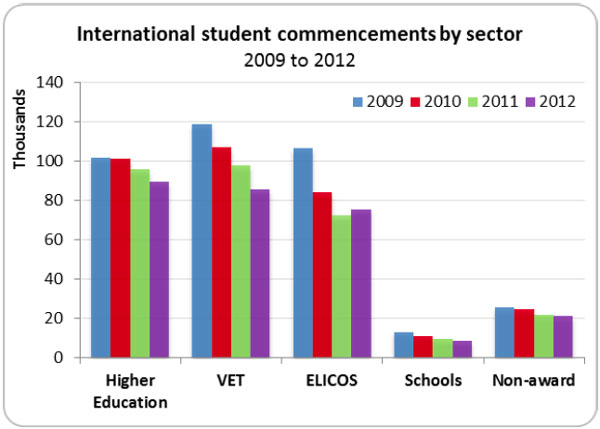 Regarding specific sectors, here are the details (please note that “commencements” refers to new enrolments – those students entering the system for the first time):

The top five international student markets (by volume of enrolments) for Australia are China, India, Korea, Vietnam, and Malaysia. Next are Nepal, Pakistan, Colombia, Philippines, Sri Lanka, and Germany – noteworthy is the fact that enrolments from Pakistan, Colombia, and the Philippines grew year-over-year from 2011 to 2012 (by 18.1%, 13.8%, and 20.6%, respectively).

The Australian Council for Private Education (ACPET) commissioned Deloitte Access Economics to do an analysis of the downward enrolment trend. Deloitte Access Economics found that the new statistics “reflect a continuing decline in the international education sector’s export income of almost AUS $2 billion per annum, with financial year activity reported by the Australian Bureau of Statistics at AUS $14.7 billion in 2011–2012, compared to the peak of AUS $18.1 billion in 2009–2010.”

Looking at the ELICOS growth

The fact that ELICOS registered a small gain in enrolments (0.2%) and a more substantial one in commencements (4.2%) may be a first positive sign for the overall Australian international education sector – despite the declines other sectors registered in 2012 compared to 2011. This is because of the role and nature of the ELICOS sector: it has been described as a “pipeline” and as a “canary in the coalmine” in relation to the rest of the system, since it is very often the first – but not the only – stop for international students studying in Australia.

This means that growth in ELICOS (which just last year received very good grades from students in it) may translate to growth in other sectors such as higher education in future years, since a portion of the international students who have begin ELICOS studies (i.e., commencements) will go on to pursue degrees or other certification in Australia.

We published an article in 2012 that explains the importance of the ELICOS sector in Australia, noting of an Australia Education International study published that year that:

Of the new data showing the growth of the Australian ELICOS sector amidst declines in others, Sue Blundell, CEO of English Australia, commented to The PIE News:

But she added that the growth should be interpreted cautiously: “Whilst positive when compared to recent trends, I wouldn’t get too excited.”

What else will it take for Australia to recover?

While the news of the ELICOS stabilisation is a bright spot amid a fairly bleak overall picture, everyone knows that the recovery of the Australian international education market is dependent to a large degree on the visa and immigration climate within the country.

While governmental reforms introduced in 2012 positively affected university-bound international students’ visa, work, and immigration prospects in Australia, many question whether they have done enough for the ELICOS and VET sectors.

Because of the reforms, all international student graduates can now stay in the country for at least two years to work. In addition, all bachelor-level students are now classified as “low-risk” when it comes to how their study visa applications are assessed, regardless of what country they come from, which speeds up the application process for them.

There were other reforms passed as well, on the basis of 41 recommendations in the 2011 Knight Review, but most of them are considered to be targeting the university sector rather than the ELICOS and VET sectors.

Clare Field, the CEO of ACPET, which represents more than 1,000 VET, English and HE providers, has said the Australian government needs to extend visa and immigration reform to the VET and ELICOS sectors in order to protect this sector and the health of the overall system:

“A key recommendation of the 2011 Knight Review is that streamlined visa processing measures be introduced beyond the university sector. This delay is compounding uncertainty for providers and prospective students, with negative effects for the sector and the economy.”

For more on ACPET’s position regarding the importance of extending the Knight Review recommendations to the ELICOS and VET sectors, please follow this link.