The US Department of Homeland Security’s Student and Exchange Visitor Information System (SEVIS) is always an interesting window into international enrolment trends in the US – not least for its ability to provide something close to a real-time snapshot of student numbers.

The latest quarterly release of SEVIS data for March 2019 continues a downward trend that we first observed last year. In March 2018, the SEVIS numbers, reflecting active student visa holders at all levels of study in the US, showed a very marginal decrease (-.5%) compared to March 2017. The March 2019 data now reveals a second straight year of declining numbers with a nearly 3% drop in the number of foreign students with active US student visas.

There were just under 1,170,000 foreign students in the US as of March 2019 compared to slightly more than 1,200,000 as of March 2018 (a decrease of -2.7% year over year). This reflects enrolment at all levels of study – including language courses, degrees, community college, vocational, and K–12 – as well as those students who have graduated but remain in the US for Optional Practical Training placements.

The top 15 sending markets for US institutions and schools account for slightly more than three in four foreign enrolments in the country (76%). The following table looks at the number of student visa holders for each of these leading sending markets as of March 2018 and March 2019.

As the table reflects, 14 of the top 15 source markets declined year over year. In most cases, these are marginal decreases, the exceptions being South Korea (which continues its longer-term trend with a drop of nearly -8% this year), Saudi Arabia (which fell off -17% as the teach-out of scholarship students continues), and Iran (where the -9% decline has likely been influenced by the US administration’s travel ban and by rising political tensions between the two countries generally).

Brazil stands out as the lone sending market among the top 15 to have increased as of March 2019. 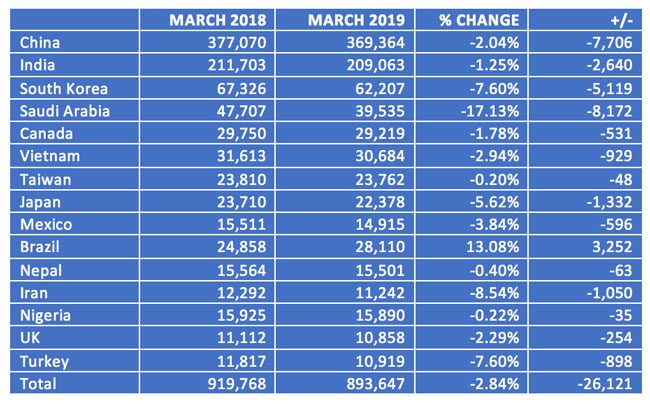 This latest SEVIS data reinforces a marginal downward trend in foreign enrolments in the US that we have been tracking over the last couple of years. The Institute of International Education’s Open Doors report, for example, highlights that, when OPT numbers are factored out, the number of international students on American university and college campuses fell by -1.3% between 2016/17 and 2017/18. This marked the first time there had been a reduction in this top-line value in more than a decade.

Open Doors reports over the last two years, however, have also noted a decreasing trend in terms of foreign student commencements in the US.

This entry was posted in Immigration, Most Popular, North America, Regions, United States.