Newly released data indicates that South Africa’s English Language Teaching (ELT) sector booked a third consecutive year of growth in 2018. Student numbers were down slightly from 2017, but, on average, students stayed longer, and this helped to drive total student-weeks for the year to an all-time high.

These are among the findings in the latest data release from Education South Africa (EduSA), the country’s peak body for ELT. EduSA reports a total enrolment of 9,512 among its member schools in 2018, down 5% from 10,042 students the year before. Student weeks, however, rose nearly 5% to reach a new high point of 64,102 for 2018.

This important shift in the composition of ELT enrolments in South Africa can be traced back to a November 2016 out-of-court settlement between EduSA and the South African government. That settlement ended two years of legal limbo where the country’s ELT providers were effectively kept outside of the student visa system. With the settlement, study visas could once again be issued for students enrolled with recognised ELT providers.

“The main reason why students are staying longer is due to our recent accreditation with the Department of Higher Education and Training in South Africa,” agrees EduSA CEO Ryan Peters. “The ELT industry now benefits from the collaboration with our government in a manner that opens the door for more long-term study visas.”

As the following charts reflect, South Africa has a fairly broadly based enrolment with strong representation from most global regions, with the exception of Asia. 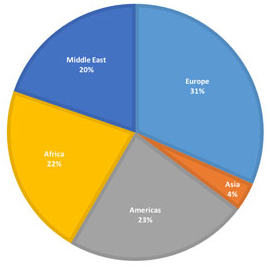 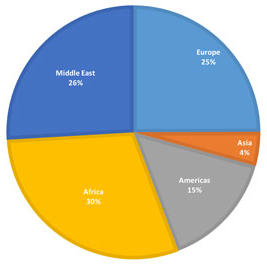 Nearly all of the students (and student weeks) attributed to the Americas come from Brazil, which remained South Africa’s leading sending country by far in 2018. “Brazilians and South Africans have a lot in common,” says Mr Peters. “We both offer cultural diversity, nature, wildlife, and a warm disposition. Another factor is that direct flights are affordable, allowing for more frequent movement between the two BRICS nations.”

Student numbers for most global regions increased last year, with the exception of Asia, which fell off 6% and Europe, where enrolments declined by 26%. EduSA attributes part of that European drop to a looming water crisis in South Africa last year, which was widely covered in European media.

In contrast, enrolments from the Middle East jumped up 20% in 2018, marking it as an increasingly important growth market for South African providers.

“This could have been due to ongoing travel challenges that are redirecting Middle Eastern learners to our market,” acknowledges Mr Peters. “This was followed by an increase of 11% from the rest of Africa last year. The overall development of the African continent is a key contributing factor to the growth in the requirement for ELT.”

Finally, EduSA reports a growing interest in general from a widening range of sending markets. “Agents have indicated that prospective students are asking for ‘something different’, which is exactly what South Africa has to offer the ELT marketplace,” says Mr Peters. The EduSA data indicates that agents referred roughly two thirds (65%) of all ELT students to the country in 2018.