The growing popularity of international K-12 schools in China

Over the past three years, there has been a significant rise in the number of Chinese families selecting an international style of education in China for their children.

With the development of the country’s international Chinese-owned Private Schools (iCPS) sector, options for Chinese parents to keep their children close to home prior to university and yet receive an education that prepares them well for university studies abroad, have expanded. For many of China’s parents, this is proving to be the preferred option, in preference to foreign boarding or foundation years overseas, at an age when their child may not be sufficiently mature to face independent living in a vastly different cultural context.

Private education in China is developing thanks to favourable government regulations, and it is growing in popularity amongst Chinese nationals, despite free public schools. This is partly due to a shortage of education resources in the public education sector, but also due to increased wealth of many Chinese families who are seeking private options as a route to academic success. For the most aspirational of families, the international Chinese Private Schools offer the best of all worlds: an international style of bilingual education where children can learn in the language of English, follow a more Western-style of pedagogy, and study towards globally recognised examinations that effectively pave their way for subsequent admission to the world’s top universities and, ultimately, global careers.

There is also a growing recognition amongst informed Chinese parents (many who have experienced, or are aware of the demands of foreign higher education) that university success is about completing the entire degree course and graduating; not simply about getting the grades to enter university. Such success requires independent learning skills, the ability to think creatively, and to debate and communicate effectively – for most of the best universities in the world, this means in the language of English. These are the skills that iCPSs are promoting, and many successfully offering, particularly when foreign collaborations are involved.

Some of the most successful developments within the iCPS sector have included partnerships between Chinese investors and foreign independent schools, in particular, British schools. They have not only provided the essential Western skills and pedagogy, but bring an important brand identity which responds to the demand, by aspirational Chinese families for education that delivers academic heritage, reputation, brand prestige as well as a reliable route to higher education.

The international Chinese Private Schools are one of the few routes by which foreign brands can get involved in the education of Chinese children in China. There are now 31 independent school brands which have established agreements with Chinese schools and investors in order to deliver teaching expertise and an international style of education. Several such schools opened their doors for the first time in September 2018, including Adcote School and Lucton School in Shanghai; Nanwai King’s College in Wuxi; RDFZ King’s College in Hangzhou; Rong Qiao Sedbergh School in Fuzhou; Huili Schools in Shanghai and Hangzhou which have service agreements with Wellington College; and Wycombe Abbey International in Hangzhou. More are in development and the trend looks set to continue.

2018/19 academic year data, now available in the International Schools Market Intelligence Report for China from ISC Research, identify that over 245,500 students (primarily Chinese nationals) are enrolled in the 563 iCPSs already established in China. ISC Research projections suggest that by 2028 this number will have increased to well over 800,000 Chinese children attending such schools.

Enrolment growth is anticipated for several reasons. In addition to their reputation for pathway preparation to global university and careers, access to the high-fee iCPSs is increasing as levels of personal wealth in China continue to rise. ISC’s China Market Intelligence Report states that China has around 1.3 million USD millionaires and over 800 USD billionaires. Over the next 15 years, the number of high-income residents in top-tier cities – such as Beijing, Guangzhou, Shanghai, and Shenzhen – is expected to double. The number of families able to afford the tuition of iCPSs has therefore increased rapidly and will continue to do so. 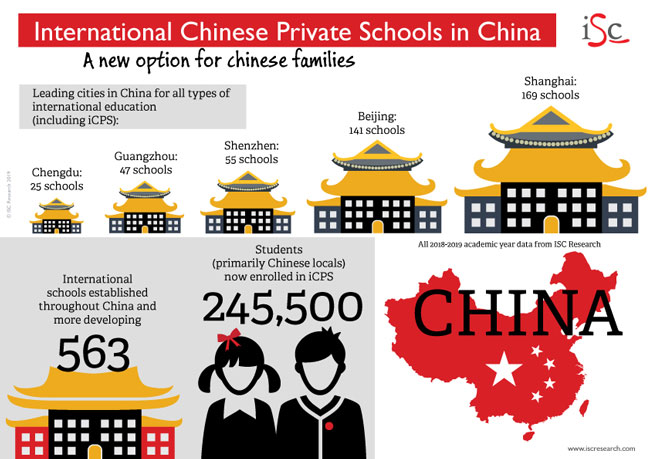 Regardless of their independent structure, government regulations for these schools are strict. There are restrictions on curriculum content during the compulsory years from grades 1 to 9; some subjects must follow the Chinese National Curriculum (notably history, geography, and mathematics) and be delivered in Chinese by Chinese nationals. However, the way learning can be delivered can be quite different from Chinese public schools, and the chance to develop English language skills, the ethos of the school, extra-curricular activities, uniform, house system, and other aspects of school life can be significantly influenced by Western approaches, even during the compulsory years.

Successfully operating an iCPS therefore involves a need to blend the Chinese National Curriculum with a foreign programme; one that must be very carefully delivered up to grade 9 to ensure full compliance with government requirements, while exposing students to as much of an international approach as possible.

Chinese families are selecting iCPSs for very specific reasons and as such, expect the teachers delivering the learning to have these skills and experiences. As a result, there is a demand for a high proportion of foreign, native English-speaking teachers at the international Chinese Private Schools; teachers who can deliver a blended, dual curriculum with sufficient expertise in Western-informed pedagogy (i.e., inquiry-led, student-led, collaborative learning). This is an important characteristic of the best (premium) schools; one that distinguishes them from schools at the lower end of the market and is a challenge for this developing market sector which faces a shortage of sufficiently qualified teachers in China.

According to ISC Research teacher demographics from this academic year, the proportion of foreign teachers employed by iCPSs is currently 39.5% (increasing to 44.9% in the premium iCPSs). ISC Research estimates that, if the current rate of growth is maintained during the next five years, around 64,700 teachers will need to be employed at China’s international schools in the 2023/24 academic year, at least 37,000 of who will be foreign teachers.

The upskilling of Chinese teachers will be one of the keys to the successful expansion of the iCPS sector and there are emerging solutions. The Huili Institute of Learning in Shanghai, for example, has been founded to support the training and professional development of teachers working within the international and bilingual context in China, and further afield. A strategic partnership with Durham University is enabling the Huili Institute to offer a Postgraduate Certificate in Education (PGCE) in an international or bilingual context, with a specific focus on the demands of being an excellent teacher in an international or bilingual school.

Other solutions include highly targeted recruitment support such as that from Eurus which specifically roadmaps Chinese teachers towards the development of skills they need to meet the demands of the iCPSs.

Richard Gaskell is schools director at ISC Research which has been collecting market intelligence and data on international schools throughout the world for over twenty years.

This entry was posted in Asia, China, K-12, Most Popular, Regions.