Australia’s brand as a top study abroad destination continues to strengthen – and in a growing number of sending markets. The Australian government has just released data showing that international student numbers grew by 11.4% in 2018, another year of double-digit growth following a 12.6% increase in 2017. There are now 693,750 international students in the country – 70,820 more than in 2017.

Total international enrolments also grew substantially to reach 876,400. The discrepancy between total enrolments and student numbers occurs due to the fact that the same student can enrol in more than one course during a year. Enrolments grew by 10.1% following 12.2% growth in 2017, while commencements increased by 6.6% after 10.2% growth in 2017.

Higher education posted the largest gains in 2018 (14.4%) after a strong 2017 as well, and with a significant increase in post-graduate enrolments. For the first time, as of 2018, the number of international enrolments in post-graduate programmes in Australia is now greater than the number for undergraduate studies.

Growth outside of China

While Chinese students still make up the lion’s share (29.2%) of Australia’s international enrolments – and while Chinese enrolments increased 10.9% over 2017 to reach 255,895 – other key markets contributed higher rates of growth. India, for example, grew by 24.5% to 108,290 enrolments and Nepal, the third most important sending market, contributed 52,243 enrolments – a huge 48.4% increase over 2017. A related Austrade analysis highlights that, “India and Nepal’s combined increase was larger than China’s.” 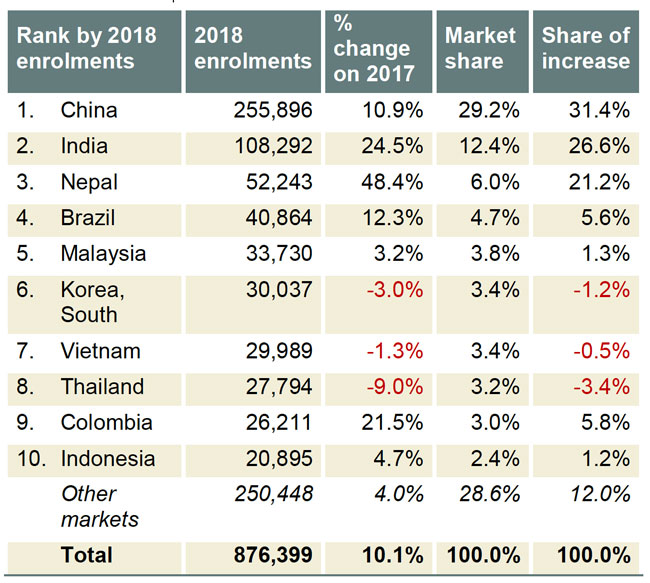 There were notable declines as well: enrolments from South Korea, Vietnam, and Thailand, which are the sixth, seventh, and eighth largest foreign student markets for Australia, declined by -3%, -1.3%, and -9%, respectively.

Diversification outside of the top ten

Overall, the trends suggest that Australia is placing a greater emphasis on diversification, with South Asia a priority region. Austrade affirms that, “Australian Institutions are highly active in South Asia markets with the tempo of visits and partnerships increasing over the last 18 months in particular,” and adds:

“Country-specific factors generating demand include interest in India moving away from US and UK; in Sri Lanka, a strong Australian brand and disjoint between state university places and those students leaving high school; and in Pakistan growing brand recognition of Australia as a quality supplier of education with pathways options.”

Of the substantial growth from the Latin American market of Colombia, the Austrade report cites “relatively good exchange rate in Australia compared to the US, improved interest rates in Colombia, high visa grant rates, increased agent activity, low English proficiency …. and the ability to work whilst studying” as major factors driving increased demand for study in Australia, noting as well that, “many Australian providers are offering scholarships in search of diversification.”

Austrade also highlights several market characteristics in the Philippines that are contributing to the country’s rapidly expanding contribution of students to Australian institutions, including a growing middle class, economic expansion, and high unemployment. The number of agents operating on behalf of Australian institutions is now significant, and the report states that Australia and the US are tied for first place as the preferred destination for Filipino undergraduate students.

Offshore enrolments trending up as well

International education represents Australia’s third largest export (after only coal and iron ore) and was valued at AUS$34.9 billion in 2018 (US$24.7 billion).

This entry was posted in Australia, Australia/Oceania, Regions.