Taiwan’s foreign enrolment getting a boost from Southeast Asia

The latest statistical release from Taiwan’s Ministry of Education reveals that foreign enrolment in the country increased by 4.5% to reach nearly 127,000 students in 2018. 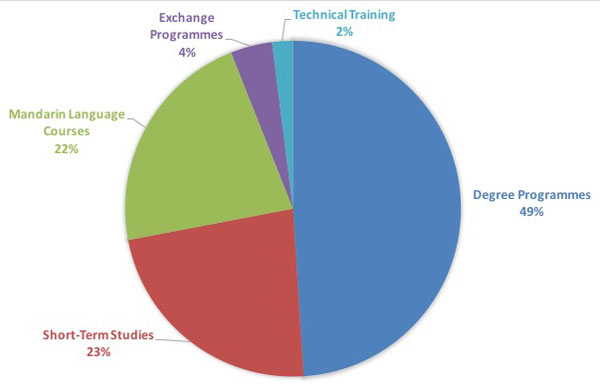 2018 foreign enrolment in Taiwan by type of study. Source: Taiwan Ministry of Education

Taiwan’s increasing emphasis on markets in Southeast Asia and South Asia – under its “New Southbound Policy” – was a major factor in the 4.5% growth recorded last year. The strategy was enacted in 2016 to encourage closer economic and cultural ties between Taiwan and 18 other Asian markets, including Malaysia, Vietnam, Indonesia, and Thailand.

The Ministry of Education reports that more than 50,000 of all international students enrolled in Taiwan in 2018 were from Southbound Policy countries, representing nearly a third of total enrolment last year and a year-over-year increase of 10,600 students from those target markets.

Also in 2018, the combined enrolments from Southbound Policy countries surpassed those from China for the first time.

The top 10 sending markets for Taiwan in 2018 are summarised in the table below.

The top ten sending markets for Taiwan, 2018. Proportion of total enrolment is shown for each as is the proportion from each sending country that are engaged in degree studies in Taiwan. Source: Taiwan Ministry of Education

Chinese numbers were down 15% in 2018 (from 35,305 in 2017) but still represented nearly a quarter of total foreign enrolment during the year. Malaysia held its number two position and was down marginally from 2017. Vietnam and Indonesia – two notable Southbound Policy markets – both recorded significant growth and surged to become the third and fourth-largest sending markets respectively.

Diploma programmes recorded an 11% increase in enrolments, while growth was even higher (34%) for degree programmes. Many more students also came to Taiwan for Mandarin language studies as well, with growth of 20.5% year-over-year.

This entry was posted in Asia, Regions, Taiwan.