Indonesian outbound continues to grow with emphasis on regional destinations

Consider this handful of economic and demographic indicators for Indonesia and it quickly becomes obvious why competition for the country’s internationally mobile students is heating up. Indonesia is:

And it is a market within the powerful ASEAN trading block (Association of Southeast Asian Nations), with a government that is demonstrably encouraging its students to pursue advanced degrees. In the past year alone, funding for the Indonesian Endowment Fund for Education (LPDP), a scholarship programme for Indonesian students seeking masters and doctoral opportunities abroad, has more than doubled.

A question of numbers

While the most recent UNESCO data shows that there were just over 45,000 Indonesian students abroad in 2017, there are indications from other sources that this figure may be understated. The US Commercial Service uses IIE data to estimate that that there were over 69,000 Indonesian students abroad in 2018/19, with 9,130 in the US.

There is also a discrepancy in numbers regarding Indonesian students in Australia (the most popular study abroad destination for Indonesians): UNESCO counts 10,676 Indonesians in Australian higher education in 2017, while the Australian Department of Education and Training’s figure is 15,885 for 2017 (and more than 16,500 in 2018). And differing counts continue in Malaysia (third most popular for Indonesian students), where UNESCO counts 5,825 Indonesians in 2017 and the Malaysian government reports 9,000.

These discrepancies are interesting because they suggest a context wherein Indonesian student mobility is (1) growing more quickly than is widely understood and (2) placing more emphasis on destinations in the Asia Pacific, such as Australia, Malaysia, and China. Indonesian culture is notable for prioritising family closeness and connection, and Indonesian students, in global surveys, are more likely than students from most other countries to mention “fear of homesickness” as a barrier to study abroad. With the ASEAN alliance increasing in economic importance, with quality higher education increasingly available in the region, and with a current US administration perceived to be unwelcoming to Muslim students, Indonesians have more reasons to consider study destinations closer to home.

Meanwhile, according to the US Commercial Service, other destinations, including New Zealand, China, Malaysia, and Singapore, have stepped up their recruiting efforts in Indonesia. The Commercial Service notes that “China, in particular, increased scholarships in the country after first witnessing a 42% enrolment surge at its universities in 2007–2009.” That was ten years ago, a long time before China asserted itself as the world’s fifth most popular study abroad destination. Indonesian students are reportedly growing more interested in learning the Chinese language, not a surprise given China’s growing economic and political power.

Characteristics of the Indonesian market

The US Commercial Service notes that “more than ninety percent of Indonesians studying abroad are self-funded,” relying on financial support from parents and/or overseas relatives. The rest are on grants or scholarships from the Indonesian government or from universities and companies. Some foreign institutions are partnering with the Indonesian government’s Indonesia Endowment Fund for Education (LPDP) scholarship programme to boost their chances of enrolling Indonesian students.

Most Indonesian students abroad are enrolled in undergraduate programmes, but we can anticipate more demand for post-graduate studies as a result of the Indonesian government’s greatly increased funding for the Endowment Fund. STEM degrees, business programmes, and hospitality training courses are very popular. And language institutes and pathway programmes have excellent opportunities given the relatively low level of English-language proficiency among Indonesian students hoping to enrol in English-taught degree programmes.

Affordability a top driver of choice

Indonesians are price sensitive and motivated by the possibility of a scholarship. While the middle class is growing, many families remain frugal out of habit or necessity, and financial analysts point to “subdued household consumption” as a reason Indonesia’s GDP has not been growing as fast as some expected it would in recent years.

An AFS Intercultural Connections survey of Indonesian students aged 13–18 conducted in 2017 found that close to half (45%) would consider study abroad only if a full scholarship was available, and nearly a quarter (22%) said that once they had chosen a destination country, they would select the lowest tuition available for their studies. Some institutions recruiting in the Indonesian market are wisely setting up dedicated scholarship pages for Indonesian students.

Indonesian teenagers ranked price a close second to “reputation of the host country” in the AFS study as the most important driver of their study abroad decisions (84% and 80%, respectively).

With tuition relatively high in the US, the US Commercial Service observes that American universities are engaging in “1+1” or “1+3” or “2+2” programmes which enable Indonesian students to apply credits from their home university towards an undergraduate degree at a foreign university.

Money counts, but family matters most

As much as Indonesian teens may want to study abroad, many aren’t excited about being far away from their families and friends. The AFS survey found that nearly half (46%) of young Indonesian students said that fear of homesickness was a leading concern for them around study abroad, and 47% mentioned “safety and security.” Such findings underline the extent of the competitive advantage that education institutions in destinations close to Indonesia have when recruiting in this market.

For those farther away, creating – and promoting though the institutional website and social media channels – a warm and welcoming environment for Indonesian students is crucial. Testimonials from current and former Indonesian students are key and will carry a great deal of weight with those still deciding where to go from their homes in Indonesia – a decision that is very often made with parents. Some institutions are going so far as to create dedicated resources and web pages for the parents of their Indonesian students so parents can feel like they are part of the experience, even from afar. Higher Education Marketing notes that “many institutions set up ‘family programmes’ which involve regular newsletters and events for Indonesian parents.” 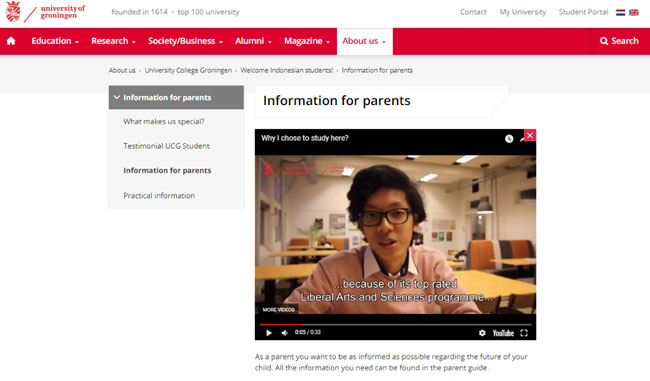 The dedicated page for Indonesian parents set up by the University of Gronginen in the Netherlands. Source: Higher Education Marketing

The US Commercial Service adds that “Educational consultants are very popular with prospective students and their parents as they serve as a “one-stop-shop” for applying to schools.”

This entry was posted in Asia, Indonesia, Most Popular, Regions.