The number of foreign students studying in the country rose 16.25% last year, marking a third consecutive year of double-digit growth and an overall increase of 73% in the five years since 2014.

The last time we took a close look at the enrolment composition of each country, the UK was the second-ranked study destination in the world (after only the US), followed by Australia in third, and Canada in fourth. Based on the continued rapid growth of foreign student numbers in both Australia and Canada, it seems likely that there is further change afoot in that global table of leading study destinations.

India continues to be the big story in Canada’s international education sector. The number of Indian students grew by another 40% in 2018, for total overall growth of just under 350% since 2014. This amounts to more than 172,600 Indian students in Canada last year, a benchmark that means that India will now surpass China as the leading sending market for Canada. Chinese numbers rose 2% last year to reach just under 143,000.

While they are showing contrasting trends in recent years – China is flattening out as India surges – the two countries together accounted for 55% of all visiting students in Canada.

More broadly, the top 20 source markets, as reflected in the table below, sent nearly 86% of Canada’s foreign students in 2018. 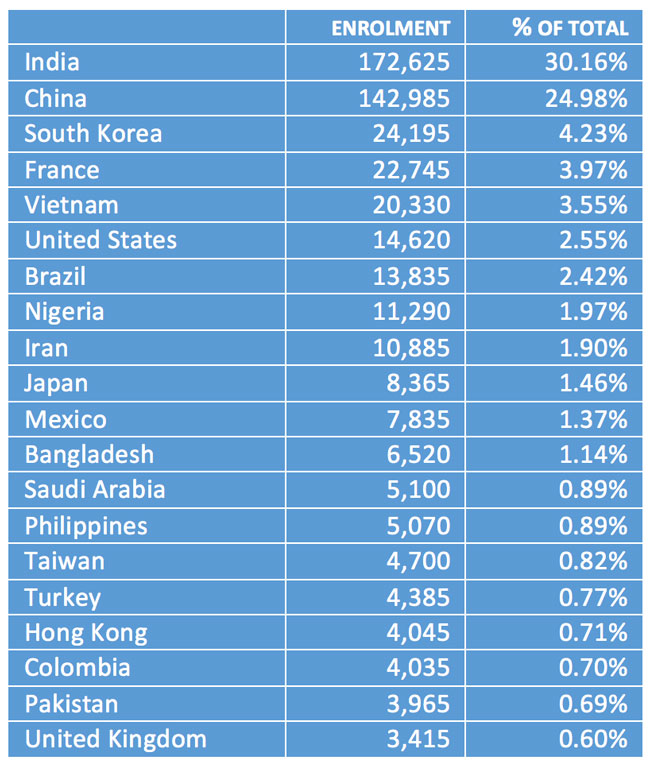 The top 20 sending markets for Canada, 2018. Enrolment and percentage of total. Source: IRCC

In terms of level of study, 13.5% of Canada’s international students were in secondary schools, 76.5% in post-secondary programmes, and 10% in “other studies”, including exchange programmes and language studies of six months’ duration or more.