In its updated report for year-to-date June 2018, DET reports just under 627,000 international students in Australia. This represents an 11% increase over the same period for 2017.

A closer look reveals, however, that it is the higher education and VET sectors that are driving nearly all of that growth this year, with overall year-over-year increases of 15% and 14% respectively through June 2018.

Sector-by-sector trends for commencements reveal a similar pattern through mid-2018 with strong growth in post-secondary but relatively flat volumes in other sectors. 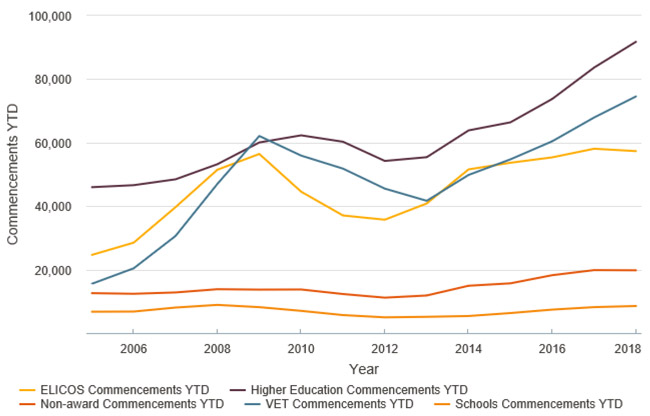 As the preceding chart reflects, ELICOS commencements actually declined marginally through June 2018 (a decrease of 1.3% over the year previous, for an overall drop of just over 750 students). Overall enrolment, however, was almost exactly flat, with a 0.2% increase year-over-year and a net gain of 205 students compared to 2017.

Among the leading source countries for Australian ELT providers, only China continues to demonstrate strong growth in commencements this year. Other than China, which remains by far the leading sender for Australian ELICOS (and accounts for 27% of total enrolment), nearly all of the top 20 source markets are showing flat or declining student starts as of June 2018. The exceptions to this pattern are Colombia, India, and Chile, for which the numbers of new students increased by 7.5%, 7.1%, and 30% respectively.

These contrasting trends reinforce one observation that can be drawn from the following chart: that Latin markets are continuing to play an increasingly important role for ELICOS centres in Australia. 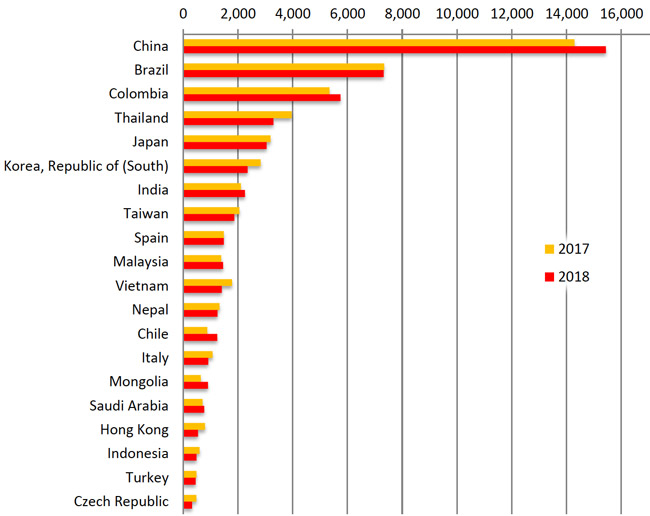 A related commentary from English Australia highlights that visa grants for ELICOS study fell by 4.4% in fiscal year 2017/18. The visa data, however, reveals a worrying trend in that the number of visas granted to ELICOS students applying from outside Australia declined by 9% (or about 2,700 students) – a decrease that was offset by an increase in visas granted to students already in Australia (a category that went up by 15%, or about 1,000 students, in the same fiscal year).

“This suggests a worrying trend of recycling students rather than bringing in new students from offshore markets,” notes the English Australia analysis. “From an optimistic view point, this still represents the second-best year ever for offshore student recruitment. From a pessimistic view, the fall in offshore applications is being offset by onshore re-enrolling students which isn’t a sustainable trend and possibly the start of a significant decline.”

Taking a broader view, those year-over-year observations can also be set within a context in which Australia’s competitive position in the ELT sector has significantly strengthened in recent years.

Updated figures compiled by the industry research consultancy StudentMarketing (and presented at the recent English Australia conference in Sydney) highlight that Australia has steadily gained global market share since 2013.

When measured in full-time-equivalent student weeks, Australia’s share of global ELT mobility increased from 16% in 2013 to 21% in 2017. Those gains are especially notable given the overall marginal net growth in total student bookings over this period, and the declines in market share recorded by other major study destinations, notably the US and UK, over the last five years.