Following a dip in 2016, Saudi Arabia’s college-aged population has begun to grow again and is forecast to reach a cohort of about four million 18-to-24-year-olds by 2025, up from a little more than three million today. All told, about half of the current population (of about 33 million people) is under the age of 25.

These are the types of trends that give rise to talk of a “demographic dividend” – or the economic potential that derives from a shift in a population’s age structure, particularly when the working-age population is larger than a country’s non-working cohorts. And this is the opportunity, and the challenge, that Saudi Arabia now has.

This is the same potential that helped to fuel the massive King Abdullah Scholarship Programme (KASP), and that saw such large numbers of funded Saudi students going abroad over the past decade and more. With the spotlight squarely on such a generous scholarship programme, another important development was unfolding more quietly over roughly the same period: the Kingdom has also been quickly expanding its higher education capacity.

Total university capacity in Saudi Arabia reached about 1.7 million students as of 2016, up from 850,000 in 2009 and less than 650,000 in 2006. Most of this capacity resides in the Kingdom’s 28 public universities, but the private sector, with its current group of ten institutions, is growing quickly. More to the point, given the more constrained public finance outlook in the country of late it will largely be the private sector where any further expansion through 2025 will likely take place. As the following chart reflects, the proportion of higher education enrolment accounted for by private universities is projected to expand from 6% in 2014 to 12% by 2020. 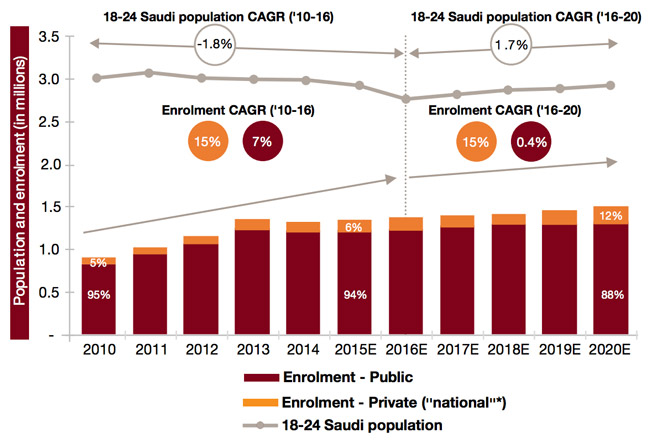 Even so, the Saudi system is not keeping pace with labour market demand. It produces only about a fifth of the engineers that the economy requires, and foreign graduates fill nearly seven in ten science jobs. Saudi Arabia, QS reported last year, “Has a workforce shortage in many areas of science and technology, such as health, agriculture, engineering, biotechnology, nanotechnology, and information technology.”

These prevailing demographic and economic trends have been important drivers in Crown Prince Mohammad bin Salman’s Vision 2030 strategy to diversify and strengthen the Saudi economy.

The strategy sets out an ambitious programme of innovation that will see the Kingdom invest US$1.6 billion in research and development over the next two years alone. Within that envelope is a US$75 million allocation to support international partnerships, a mechanism which is projected to have a transformative effect on higher education in the country. Times Higher Education reports that, “The Saudi Research and Development Office has identified six priority fields for international research collaboration: water; energy; information technology; petrochemicals; life sciences and health; and the environment.”

Fuelled in part by this additional funding, the Saudi leadership aims to build the research capacity of its public universities and in turn to place five of those higher education institutions in the top 100 of major rankings by 2030. There are, at present, no Saudi universities in that top tier in any of the global tables.

Along with its increased research funding, Vision 2030 anticipates a modernisation of higher education curriculum, and closer links between Saudi universities and the country’s employers. And it is perhaps this point that underscores the wild card in the government’s wide-ranging plans for its higher education system. Building budgets is one thing but the pace and scale of change anticipated in Vision 2030 will require nothing less than a cultural shift, and very likely a greater commitment to academic freedom and open exchange.

This suggests that there are further important changes afoot in Saudi higher education, in terms of its capacity, research impacts, international links, and graduate outcomes. And this in turn raises the question as to how all of these developments at home will shape outbound mobility from the Kingdom over the next decade and more.

Will students stay home in greater numbers, or will the expanding college-aged population continue to encourage students to go abroad for access to high-quality, career-relevant qualifications? The answers to all such question are likely to become more clear well before 2030 as Saudi Arabia’s demographic dividend continues to come into sharper focus.