Scale of OPT growth revealed as US administration contemplates reforms

The scale and importance of the Optional Practical Training (OPT) programme in the US, both as a lever for international recruitment and as a source of skilled talent for US employers, is in the spotlight in a newly released Pew Research Center study.

Pew Research reports that over the 12 years between 2004 and 2016, roughly 1.5 million foreign graduates were able to stay and work in the US through the OPT programme – more than half of which (53%) were alumni of STEM programmes (science, technology, engineering, and math).

OPT allows authorised foreign students to stay and work in the US for up to 12 months following graduation. Those graduating from STEM fields have benefitted from two executive orders, the first in 2008 and a second in 2016, that provided for extended work terms – ultimately allowing STEM graduates to stay for an additional 24 months and up to three years in total.

As the following chart reflects, the effect on STEM OPT numbers has been profound, with the number of STEM graduates in OPT placements increasing by 400% since the first extension was announced in 2008. 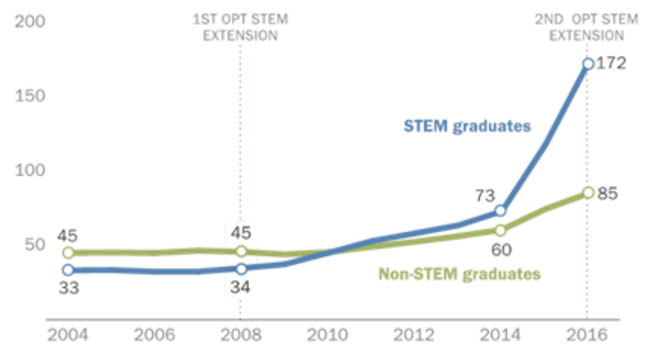 Number of foreign graduates (in thousands) obtaining OPT authorization to work in the US, 2004–2016. Source: US Immigration and Customs Enforcement, Pew Research

New rules on the way this year

The growth of the OPT programme has reached a scale where it now figures prominently in the overall composition of international enrolment in the US. In fact, a 20% increase in OPT programme numbers played a large part in the overall foreign enrolment growth (3.4%) recorded in the US in 2016/17. As we reported at the time, “Nearly all of the growth in overall enrolment for 2016/17 has come from increased participation in [OPT]…Absent those OPT counts, however, the total number of international students enrolled with US institutions grew by only .76% year-over-year.”

This reflects the significant role for OPT in the US today, the fact that programme participants continue to be counted as international students during their work terms, and the powerful role that OPT plays in the overall attractiveness of the US as a study destination. This is especially the case in source markets, including the key Indian market, where post-graduate employment opportunities are a significant decision factor for prospective students.

For all of these reasons, the prospect of reforms to the OPT programme this year is squarely on the radar of international recruiters, both in the US and abroad.

The US administration first signalled its intent to introduce new OPT rules in a regulatory agenda filed by the Department of Homeland Security (DHS) in fall 2017. This notice has since been reinforced by the department’s updated agenda for spring 2018, which explicitly anticipates new regulatory proposals for OPT: “[Immigration and Customs Enforcement] will propose this rule to improve protections of US workers who may be negatively impacted by employment of nonimmigrant students on F and M visas. The rule is a comprehensive reform of practical training options intended to reduce fraud and abuse.”

A related statement from NAFSA cautions that, “This is not a final rule, or even a proposed rule yet. Its appearance on the DHS regulatory agenda as something at the ‘proposed rule stage’ means that DHS is working on a proposed rule, which will eventually be published in the Federal Register for public notice and comment…Specifics have not yet been released to the public…The language in the Regulatory Agenda is broadly worded as focused on ‘practical training,’ however, and could therefore encompass F-1 OPT, STEM OPT and CPT, as well as M-1 practical training.”

Many observers expect to see something in way of proposed regulatory changes during 2018, and, in keeping with the current administration’s “Buy American, Hire American” Executive Order, there is some expectation that any rule changes could introduce new wage restrictions and/or other measures designed to protect US workers.

In a related development, the White House also released an updated national security strategy  in December 2017. It too raises the spectre of additional constraints on STEM graduates aiming to secure OPT placements in setting out that the US government will “consider restrictions on foreign STEM students from designated countries to ensure that intellectual property is not transferred to our competitors, while acknowledging the importance of recruiting the most advanced technical workforce to the United States.”

The importance of the OPT to international recruitment to US institutions is underscored by Pew’s finding that roughly three-quarters of all foreign graduates on OPT placements between 2004 and 2016 came from Asia. In fact, nearly half came from India and China alone. These two dominant sending markets for US providers accounted for just under half of all foreign enrolment in the country in 2016/17. 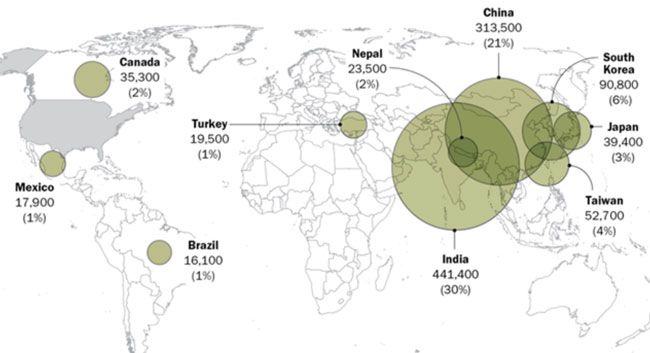 “Asian foreign student graduates accounted for 74% of all OPT approvals during this period,” notes Pew Research. “Graduates of European citizenship were the second-largest group (8%) along with students from Latin America and the Caribbean (8%), followed by African students (5%)…In terms of country of citizenship, graduates from India made up the largest share of those authorized to work under the OPT program during this period, with 441,400 (30% of the total). Students from China came second at 313,500 (21%), followed by South Koreans at 90,800 (6%).”