The continuing expansion of online learning in the US

The US is the world’s leading international study destination, and home to one of the largest populations of international students on the planet. And so any significant shifts in enrolment patterns naturally catch the interest of international educators, both in terms of what they mean for the key US market and for how they may reflect in other countries as well.

Last year, we began tracking two contrasting factors: a pattern of declining total enrolment in US higher education and a trend of increasing enrolment in online enrolment in the US. And now a newly released report reveals that both trends are continuing, and even accelerating.

Grade Increase: Tracking Distance Education in the United States finds that distance education enrolments in the US increased for the fourteenth straight year in 2016. The number of distance students in America – that is, those pursuing academic studies partially or entirely via online learning – grew by nearly 6% between fall 2015 and fall 2016. As of fall 2016, there were 6.36 million distance students in the US, a number that equates to nearly a third (31.6%) of all higher education enrolments in the country. Along with this overall growth, the proportion of university students in the US following distance courses also continues to increase, and is up from 26% in 2012.

In fall 2016, roughly half of these online students were pursuing all of their coursework via distance delivery, with the balance undertaking a combination of distance and on-campus studies.

The other notable moment in time in this trendline happened in 2012. Both distance enrolment and total higher education numbers grew in the US from 2002 to 2012, but it was at that point that the two trends began to diverge. Distance numbers have continued to grow since – in fact the nearly 6% increase between 2015 and 2016 was the fastest rate of year-over-year growth yet – but the total number of students in US higher education has been declining from 2012 on.

Total on-campus enrolments (those studying only on-campus or taking a combination of distance and face-to-face courses) fell by 6.4% or about 1.2 million students between 2012 and 2016. There were nearly 21 million students in US higher education in 2012, but four years later that total has fallen off by more than 800,000 students (roughly a 4% drop over the four years). 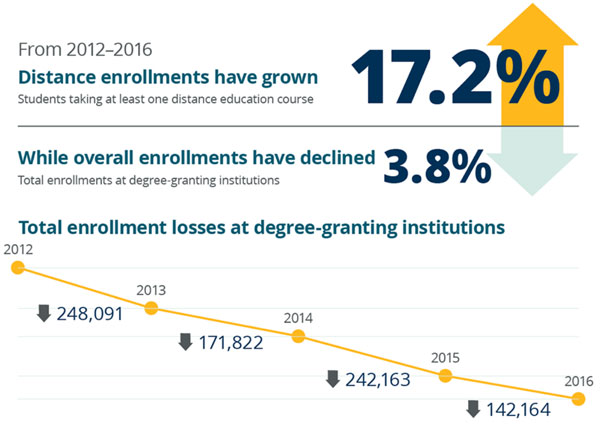 The data indicates that this enrolment drop was unevenly distributed across different categories of higher education institutions, with private, for-profit universities recording the largest declines. The study authors point out as well that virtually all of that eroding enrolment was recorded at the undergraduate level over the four years in question, whereas graduate student numbers remained relatively stable (and even grew slightly between 2014 and 2016).

Riding alongside those data points on international enrolment is the report’s observation that distance enrolments tend to skew local overall – that is, a majority of distance students enroll in programmes at nearby institutions. “Distance education is becoming more localised over time,” notes the report. “The proportion of students taking exclusively distance courses who are located in the same state as the institution offering the courses has increased every year, growing from 50.3% in 2012 to 56.1% in 2016.”

This pattern is especially notable with respect to public institutions in the US, where more than eight in ten distance enrolments (84%) are students who live in the same state where the university is based.