After a marginal decline in 2017, international enrolment in independent secondary schools in the UK have rebounded to report year-over-year growth of 4.5%. In absolute terms, foreign students with parents overseas grew from 27,281 in 2017 to 28,513 this year. This is according to the annual census of the 1,326 member schools of the Independent Schools Council (ISC). This year’s edition was carried out in January 2018 and, as every year, reflects enrolment in ISC schools at that point in time.

This international enrolment, and the global engagement of ISC schools generally, remains an important feature of this sector of British education.

“Many overseas leaders were educated in British independent schools and this has helped the country to maintain especially good diplomatic relationships with countries like Jordan, Malaysia, and Thailand, says ISC Chair Barnaby Lenon. “Because UK independent schools are so strong, other countries have encouraged them to set up partner schools abroad; recent years have seen such schools established in China and the Middle East and this has strengthened relationships with these important trading partners.”

The more than 28,500 foreign students (with parents overseas) enrolled this year represent 5.4% of the total enrolment in ISC schools in 2018. ISC notes as well that just over half of its members (51% or 670 schools) hold Tier 4 sponsor licences with UK Visas and Immigration, and thus are able to admit students from outside of the European Economic Area.

Where do students come from?

As the following graphic illustrates, nearly half of the foreign students at ISC schools (with parents overseas) come from China and Hong Kong. 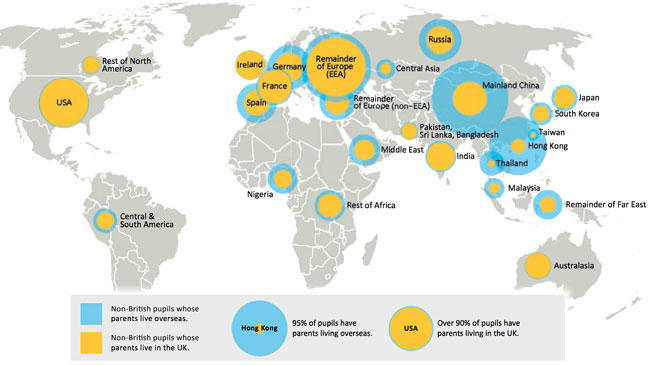 It happens that China (again, including Hong Kong) accounted for roughly two-thirds of the net growth reported by ISC schools this year. Indeed, the continuing strength of these major sending markets, has helped to offset more mixed results from the top of the table of source markets for British schools.

Leaving aside China and Hong Kong for a moment, Spain was the big gainer among the top international source markets for ISC schools, with 14% year-over-year growth and with Spanish students accounting for 5% of all foreign students at ISC schools. German enrolment has been essentially flat over 2017 and 2018, and is holding steady at roughly 6% of foreign enrolment in British independent schools. Russian numbers, meanwhile, fell off by 12% this year and Russian students again represent about 6% of total international enrolment among ISC members.

As of this year, ISC schools operate a total of 47 campuses overseas which enroll a combined 32,000 students. In other words, total foreign enrolment in campuses abroad exceeds the number of international students at ISC schools in the UK.

Not surprisingly, given the sector’s heavy reliance on the Chinese market, nearly half of these overseas operations (40% or 19 schools) are based in China. Another quarter (12 schools) are found in the Middle East with the remainder based mainly in Southeast Asia and South Korea.

Australian students studying abroad more than ever before
Numerous visa changes from Australia to kick off 1 July 2012
Dramatic changes ahead for Korean universities
Checking in on cost of living in global study destinations
The growing popularity of international K-12 schools in China
Record-high international enrolment in Canada in 2013; many students plan to stay
BRIC economies return to growth in 2017
From the field: A closer look at the Turkish outbound market