One in four higher education institutions in North America now offer badges and three in four say that such alternate credentials are “strategically important to their future.” These are some of the headline findings of a new study from Pearson and UPCEA.

The study tracks the growing footprint of alternative credentials – which are defined as “something other than the associate, bachelor’s, master’s, and doctoral degree” – in the professional, continuing, and online education offerings of North American universities and colleges.

“Perhaps it’s time to see if there are different ways to prepare contemporary students for an increasingly complex knowledge and information economy, using methods that take less time, cost less money, and lead more directly to quality employment,” says UPCEA President Wayne Smutz. “At least some employers are beginning to think this might be the case, as they express frustration over not being able to find qualified employees for their vacant jobs. It is this possibility to improve the way we prepare students that drives the increasing exploration of alternative credentials, such as certificates [and] badges.”

As the definition above suggests, the study takes a broad view of alternative credentials to include so-called “stackable degrees” (i.e., certificate programmes within full degree offerings that can be laddered to degree completion), shorter-term “micro-credentials” (which may or may not be stackable toward a certificate or degree qualification), and badges. The latter is the trickiest of the bunch as it can be understood in a couple of different ways including to refer to “a specific, small-grain size of work-related skill or micro-credential.” However, the term can also be used to describe a standardised digital or data-based representation of a variety of alternate credentials.

As the following chart reflects, the percentage of UPCEA members offering alternate credentials across this spectrum has increased notably from just 2016 to 2017. Please note that in this context the terms “undergraduate” and “graduate credit” refer to stackable credentials within those levels of degree studies offered by responding institutions. 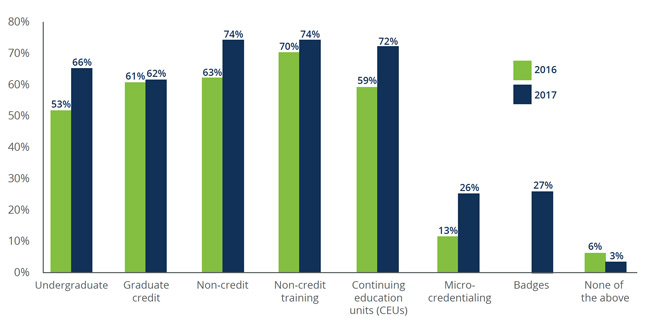 “Non-credit certificate programmes and non-credit training courses and programmes demonstrated substantial increases and currently are the two most popular offerings, both at 74%,” notes the report. “These programme formats are likely the most popular because of their versatility and ability to adapt quickly in response to changes in skill gaps. Offered separate from traditional degree programmes, their topical coverage, focus and coursework can change based on employer and labor market demand.”

The UPCEA/Pearson survey finds that badges are less commonly offered – that is, relative to stackable credentials and certificates – but are nevertheless becoming more common over the past few years, particularly in the business, healthcare, manufacturing, tourism, and technology sectors. The report adds that, “In the past year major employers have adopted digital badges for employment qualifications, including Microsoft, IBM, Oracle, Cisco and many others in the IT industry, PMI, EY and AICPA in business and professional services, and many healthcare, finance and other business sectors. The business world is increasingly embracing alternative credentials and digital badging for professional development.” 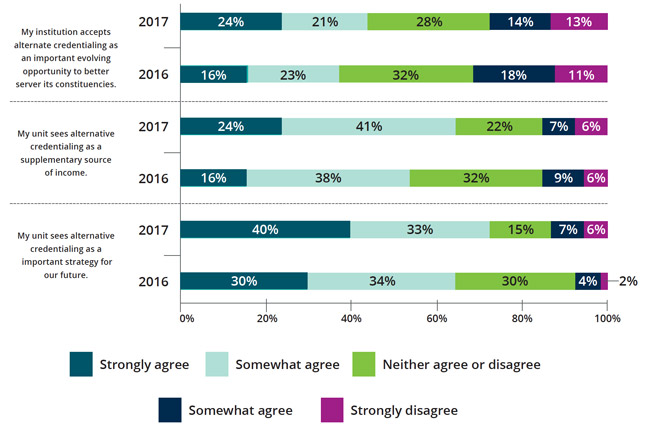