The goal was to enroll 350,000 international students by 2020, but Germany has already exceeded the target as official statistics confirm that 358,900 foreign students were studying in German universities in 2017, a 5.5% increase over the previous year. This according to a new report from the German Academic Exchange Service (DAAD) which notes the 5.5% increase means that 18,000 more international students came to study in Germany’s higher education system in 2017.

International students now compose 13% of all university students in Germany, and nearly a quarter (23%) of first-year students.

China remains by far the most important source market for Germany, sending 35,000 students in 2017 and contributing growth of 8.5%. The number of Indian students in Germany grew even more robustly (13%) and in 2017, Germany’s universities enrolled 15,308 Indian students. Iran, the US, Korea, Pakistan, Syria, and Tunisia also sent notably more students to Germany in 2017 than in 2016, while Russia, Germany’s third most important source market, sent fewer.

“Bildungsinlaender have usually lived in Germany for a long period and attended a German school before going to university here, whereas Bildungsauslaender usually come to Germany primarily in order to study here.”

The latter group, Bildungsauslaender, are particularly interesting because they more directly correlate with current demand trends for German higher education in other countries, and Bildungsauslaender numbers are growing much more quickly than Bildungsinlaender since about 2013. 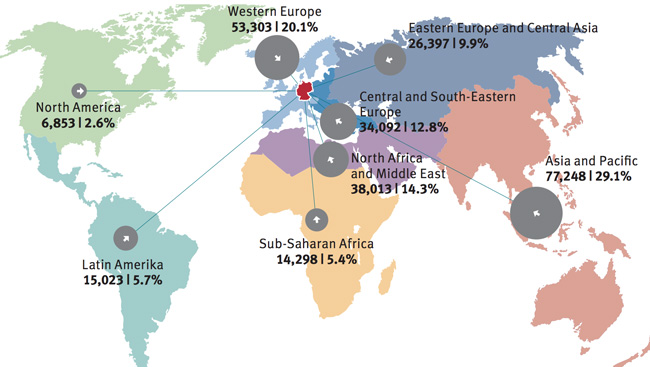 The two most popular fields of study are engineering (37%) and law, economics, and social sciences (26%).

Germany is now the world’s sixth leading study destination worldwide, after the US, the UK, Australia, Canada, and China, and the recent 5.5% growth of international students in its universities keeps it very competitive. However, as we have noted often, the competition is vigourous right now for international students and multiple countries have achieved impressive recent growth. For example:

A new Study.EU Country Ranking puts Germany atop a pack of 30 European study abroad destinations for international students wanting full degrees, the second consecutive year that Germany has held the #1 spot. Germany scored well across the criteria informing the ranking, including quality of education, cost, and life and career factors.

Within the past few years alone, Germany’s international recruitment efforts have been boosted by a no-tuition policy for international students, improved opportunities for work during studies and after graduation, and the continuing expansion of English-taught programmes within German universities.

And, as we have noted recently, Germany’s international enrolment is notable for its balance and diversification with good representation from both European Union and non-EU sending markets.

This entry was posted in Europe, Germany, Higher Education, Most Popular, Regions.