New data from the US State Department points to a marked decrease in the number of F-1 visas issued to international students in 2017. The F-1 visa class applies for students engaged in long-term studies in US higher education, as well as those on Optional Practical Training (OPT) placements following graduation.

US student visas issued, by class, for fiscal years 2013–2017. Source: US State Department

Of particular note within this overall count of F-1s is a 28% drop in the number of visas granted to Indian students and a 24% decline in visas for Chinese students. These are of course the number two and number one sending markets for the US, respectively, and they have collectively contributed the lion’s share of overall enrolment growth for US schools in recent years.

As always, the normal cautions apply when considering visa data, as opposed to actual enrolment numbers, as visa counts may not correspond precisely to enrolment. This point is particularly relevant in the case of Chinese students, given that a 2014 change in US visa policy now allows Chinese applicants to receive an F-1 that is valid for five years as opposed to one, thereby foregoing an annual renewal of visas for continuing studies. This revision alone could account for a significant proportion of the dramatic drop-off in F-1s issued to Chinese students from 2015 on. 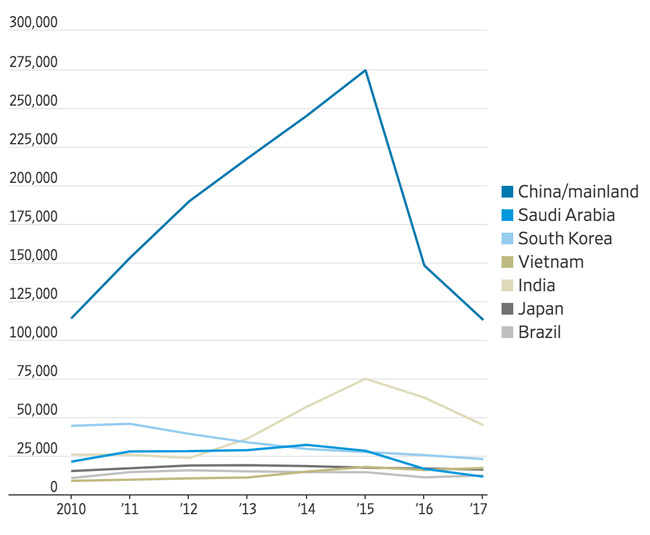 Even so, these overall visa counts represent the latest significant indicator of a levelling off and decline in foreign enrolment in the US over 2016 and 2017.

Set alongside these other important indicators, the significance of such a substantial drop in F-1 visa issuance in 2017 may well be more evident in 2018 and 2019 if the declining commencements suggested by the reduced number of visas issued is less able to keep pace with the number of graduating students in the years ahead.

The US government does not report on the number of visa applications received, nor does it reveal acceptance or rejection rates. Aside from the on-again-off-again US travel ban on visitors from Muslim-majority countries, however, there are some indications that US visa policy has generally become more restrictive, with more scrutiny of incoming international students, over the last two years.

“Some of the [drop in F-1 visa numbers] can be attributed to stepped-up competition from schools in other countries,” notes the Wall Street Journal. “But immigration attorneys and school officials say Trump administration policies are making the US a tougher destination for foreigners and point to stricter scrutiny of those who do apply.”

Indeed, US government officials have confirmed that the current US administration has explicitly revised its guidance for consular officials in order to encourage greater scrutiny of student visa applicants.

The Journal further indicates that the steepest enrolment declines in 2017 are being felt at smaller regional institutions outside the top tier of US universities.

This point is echoed by another recent report in the New York Times, which adds that, “Schools in the Midwest have been particularly hard hit — many of them non-flagship public universities that had come to rely heavily on tuition from foreign students.”

The Times also highlights the connection between stable and growing international enrolments and the financial health of US colleges, a point that recently surfaced in updated analysis from Moody’s Investors Service.

“‘Growing uncertainty for international student enrolment stems from immigration policies that are in flux,’ Moody’s said, warning that universities without global brand recognition would be hit hardest. While some flagship public and elite private colleges have been affected…the biggest impact will be felt by second-tier institutions.”