Germany ranked as most attractive study destination in Europe

An annual analysis ranks Germany as the best choice for international students within a table of 30 European study destinations. This marks the second consecutive year in which Germany appears at the top of the Study.Edu Country Ranking, a performance the higher ed portal attributes to the country’s “remarkable mix of world-class education at no or almost no fees.” In addition, Study.EU points out that Germany has made “a considerable improvement in the number of courses offered in English” and boasts the lowest unemployment rate for university graduates in Europe.

Study.EU says that the key question addressed by its ranking is “Which European countries are the best choices for full-time degree students?”

Data informing the ranking include university world rankings, governmental and university information on study programmes and tuition fees, and data from sources including Eurostat, the UN, and the OECD regarding cost of living, unemployment, quality of life, and safety in the various countries.

The ranking is based on scores in three areas: Education, Cost, and Life & Career. For the first time, this year’s analysis incorporates a score for “personal safety” in the Life & Career area, reflecting the importance of this consideration for today’s international students. Of the three dimensions, Education (i.e., quality of education) is weighted the highest, making up 45% of the total score, with Cost accounting for 30% and Life & Career scores contributing the final 25%. These three key factors are used to generate an overall score for each country out of 100. 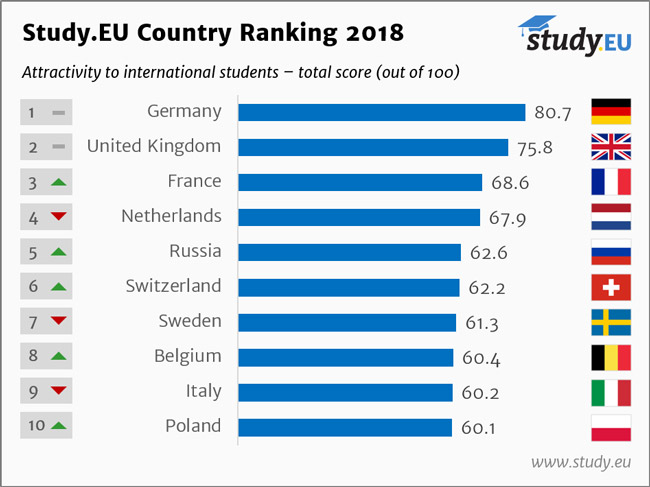 Looking just at Education factors, the UK is ranked first by a wide margin with a score of 86.7% versus the next highest scores of Germany (74%), Netherlands (61.3%), and France (53.4%). This dimension is scored according to performance in university rankings, indicators of teaching quality, and number of English-taught bachelor’s and master’s programmes.

When it comes specifically to teaching quality, as measured by staff-to-student ratios and academic reputation surveys, Switzerland, the Netherlands, and Germany score the highest. 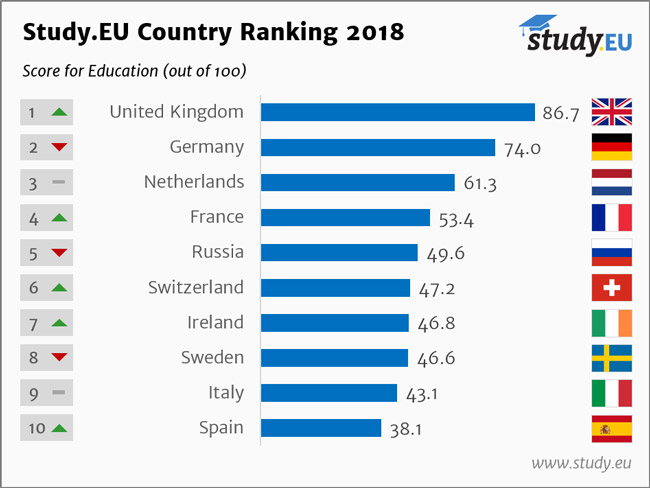 The Cost dimension considers affordability across a number of areas, including cost of living, housing, and average tuition fees. In this area Poland scores the highest – 98.1% – followed by Serbia (96.3%), Hungary (95.7%), Romania (94.1%), and Turkey (92%). This is a decidedly different group of countries than the one represented in the overall ranking. Germany is an exception, with a relatively high score in this dimension (88.5%) as well as being the overall top-ranked country “thanks to its virtually tuition-free public university system and moderate cost of living.”

By contrast, the UK places last in the Cost dimension, though Study.EU notes that (1) studying in the UK is more affordable this year than in 2017 due to the declining value of the British pound, and (2) that the Cost dimension offers only “rough guidance” given that it is an average. For example, they point out that “A year studying for an MBA in London will inevitably be much more expensive than, say, an Anthropology degree in Cardiff.” 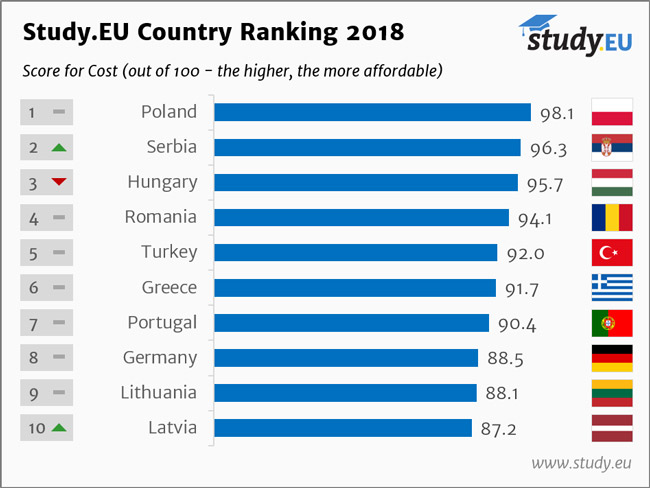 Life & Career scores, which represent 25% of the overall score contributing to a country’s ranking, are ever more significant given how much students think about their study experience as well as post-graduation outcomes today. The factors going into Life & Career are English proficiency among the population, UN World Happiness Index data, unemployment rates for the tertiary-educated, and personal safety indicators. The leading countries in this area are the UK (88%), Ireland (87.6%) Iceland (87.4%), Norway (86.4%), and Netherlands (85%). 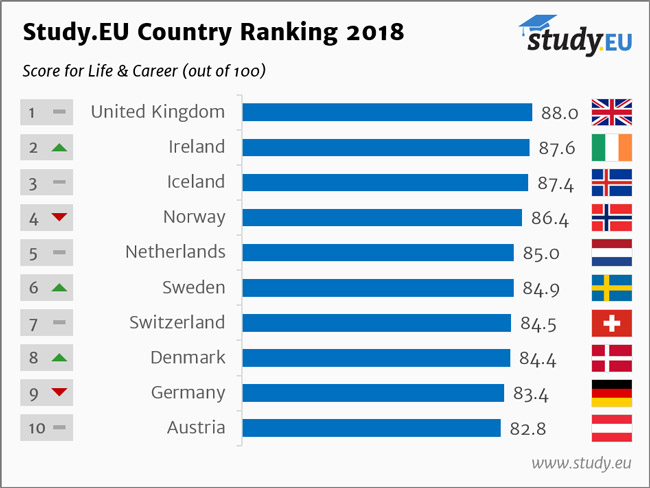 “First, there is the Trump presidency driving international students away from the US to other countries – in many cases, Europe. And then there is the upcoming Brexit, of which neither the timeline nor the consequences are foreseeable.”

There are indications that European universities outside of the UK are increasing the number of courses taught in English in preparation for Brexit, with Study.EU estimating that “the total number of English-taught programmes in universities on the continent has risen by 13% in the last year.”

Poland on the move

In 2015, Poland announced a target to host 100,000 international students by 2020, and it is steadily working on improving its offer to foreign students. Study.EU points out that affordability and English-taught programmes are key considerations for international students, and singles out Poland as worthy of mention in both respects:

“Already among last year’s most affordable countries, Polish universities have consistently increased the availability of English-taught study options. No wonder, then, that the number of foreign students in Poland has exploded from just 12,000 to over 65,000 in the past ten years.”

At the end of the day, the overall impression one has from the ranking is of a balanced field across Europe. Study.EU highlights that despite Germany’s overall leadership position, many other European destinations offer distinct advantages for international students.

“Each country has its strengths and its weaknesses,” notes the report. “There are no nations that are consistently among the best, or among the worst, for every single input factor. When looking at the three individual areas, more than two-thirds of all ranked countries make it into at least one of the top 10 lists.”

This entry was posted in Europe, Germany, Higher Education, Most Popular, Regions, Research.