Foreign language enrolment in the US trending downward

A preliminary report from the US-based Modern Language Association (MLA) finds that enrolment in foreign language programmes in US institutions – that is, all languages other than English – continued to decline through 2016.

The MLA bases its findings on a 2016 census of language course enrolment across more than 2,500 colleges and universities throughout the US. This is the first such survey since the MLA’s last census effort in 2013, at which point the association reported a decline of 6% in overall student numbers between 2009 and 2013. At that point, that was the first such drop in foreign language studies in the US in 20 years.

Total enrolment in languages other than English in US colleges and universities, 1959–2016. Source: MLA

The MLA analysis also relates language enrolment to overall post-secondary numbers in the US, and here again we see a downward trend. In 2006, there were 9.1 American students enrolled in foreign language studies for every 100 post-secondary enrolments in the US. By 2013, that ratio had fallen to 8.1 and in the latest survey for 2016 it has dropped again to 7.5 for every 100 students.

And this is a trend that catches the interest of international educators in the US and abroad. As we reported on the last MLA census in 2013, “The US is well understood to be the world’s leading international study destination. Less commonly known is the fact that it is also a major source of internationally mobile students…foreign-language competency is an important enabler of study abroad for all students.”

If foreign language facility is indeed a proxy or indicator that can help inform outbound student mobility from the US, then it is interesting to set these latest trends in foreign language study alongside some related developments in study abroad for US students. At a macro level, national initiatives like the IIE’s Generation Study Abroad seek to double outbound mobility for the US, with a goal to see 600,000 US students going abroad by 2020.

However, actual outbound growth for the US has been modest in recent years. Just under 290,000 American students went abroad for academic credit in 2012/13. The IIE reports that this number expanded to a little more than 325,000 students as of 2015/16, for overall growth of 12% over three years.

Initiatives such as Generation Study Abroad have stimulated a great deal of advocacy and partnering activity around US outbound and it is indeed possible that we will see that growth rate increase over the next two or three years. Even if that proves to be the case, the goal to reach 600,000 students by 2020 seems likely to be out of reach.

And it appears as well that funding pressure on US institutions could be eroding some of the infrastructure for foreign language study. A related item from Inside Higher Ed points out that, “In recent years, many smaller language programmes have found themselves targets of elimination at private colleges without significant endowments and at regional public universities that are lacking in consistent state support. Just this week, the University of Wisconsin at Stevens Point, as part of a retrenchment of many liberal arts programmes, announced that it was eliminating its majors in French, German, and Spanish.”

Where the students are 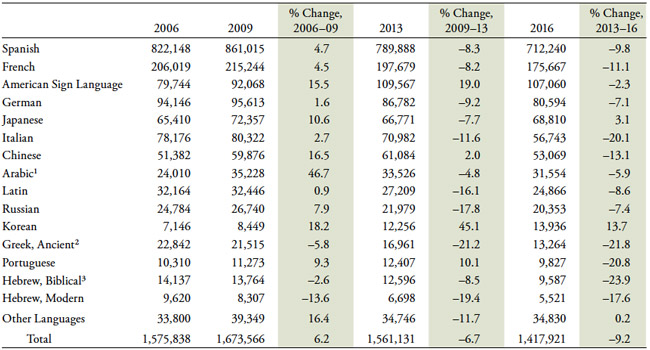 As the table also indicates, enrolment for all of the 15 most commonly taught languages in the US declined between 2013 and 2016, with the exception of Japanese and Korean. On the strength of that growth, Japanese has switched positions with Italian to take up the fifth position, and Korean moved up three spots in 2016 to become the 11th most-taught language.